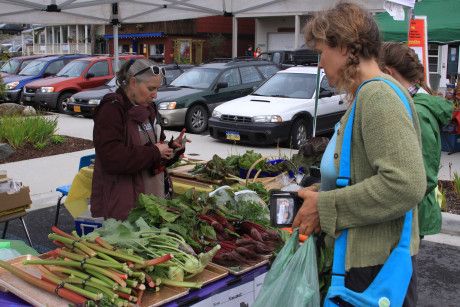 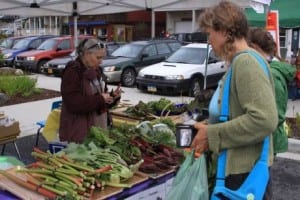 The reliability of the food supply is not something most communities devote much thought to. Agriculture, transportation, and grocery stores all work pretty well — even in relatively isolated parts of Alaska like Sitka. And depending on where you live, there can be abundant wild foods.

But a recent report called “The Sitka Community Food Assessment” reveals that our food system is vulnerable — especially to the unpredictable costs of fuel.

Lisa Sadleir-Hart coordinated the assessment. She stopped by KCAW recently to talk with Robert Woolsey about what Sitka — and communities like it — can do to become more food-secure.

The idea for taking a look at Sitka’s food supply took root, so to speak, at the Community Health Summit in the fall of 2012. At that time, food security was still kind of abstract.

That changed on the night of January 4, when Sitka was rocked by a magnitude 7.2 earthquake. We had 45-minutes to get to high ground, leaving behind all of our grocery stores, and most all of our food, at sea level.

“And it became very real, on a community level, when we actually had that event.”

But even before the threat of a tsunami focused Sitka’s attention on food security, people were feeling the pinch of the high cost of groceries, aggravated by the economic recession beginning in 2008.

“Many of us working in the food arena for a long time also realized that because we were seeing rising food prices, we had a lot of concerns about what that meant for household food security. So we’ve got two layers: Overall community food security — can we provide for ourselves and feed ourselves as a community? And secondarily, Can households do the same?”

With the goal of finding answers to those questions, Sadlier-Hart and her work group adopted the US Department of Agriculture’s Food Security Assessment Toolkit and went to work. They surveyed over 400 Sitkans, conducted focus groups, met with community leaders, and explored alternative sources of information like the Cooperative Extension Agency at the University of Alaska.

A year after the earthquake, food security was no longer abstract. Sadlier-Hart has hard data. Her report brings home several key points.

“I think a big one that’s a real plus, is how generous our community is. And how reliant we are on customary and traditional foods — what people often call subsistence foods. We eat a lot of deer in this town. We eat a lot of fish and seafood, and we also forage and harvest. And a lot of that gets shared from one household to another. Sometimes related households, sometimes they’re friends. That really jumped off the page at me.”

Sadlier-Hart says that the use of food stamps has increased by 40-percent in Sitka since the mid-2000s. Grocery prices began a sharp climb in 2008, harnessed to the cost of fuel. The assessment shows clearly who is bearing the brunt of this perfect storm of economic insecurity.

“When we talked to elders in a focus group, some of them go without. They don’t eat. And others get real creative. Some single-parent families, they’ll show up at church potlucks to try to get a meal for them and their kids. Some real interesting strategies. That sort of stuff also popped out at me.”

The food assessment is a huge source of information about economic conditions in Sitka. It’s also a tool for making policy. Sadleir-Hart says a first step is to begin to make more public land available for gardening.

We know that for many households, 95-percent of their food is imported. Most of the food we eat in the state is imported — 95-percent of it from somewhere else. As recent as the 1950s, that was only 50-percent. I think we can get to 50-percent over the next couple of decades. This is a long-term venture. It took us a long time, with cheap oil and transportation to kind of get us into this really — I don’t know if you would call it lazy — but we’ve not had to work very hard at accessing our food.
KCAW — 50-percent is a lot of potatoes.
Sadleir-Hart — It’s a lot of potatoes, it’s a lot of seaweed, it’s a lot of deer, it’s a lot of lingcod. It’s a lot of gardens. You can grow a lot of food. I grow a lot of food out of my garden. A lot of which I don’t eat, which I donate to the Farmers’ Market. So if I can do it, I think other people can do it.

Sadleir-Hart also believes it’s important to maintain eligibility for food stamps, as much for the economic impact of the program as for its contribution to nutrition. She says it pumps about over $1-million annually into the economy.

She also says Sitka’s rural subsistence designation — and the access it allows to customary and traditional foods — is more than a lifestyle choice. Hunting, fishing, and gathering are a major economic component of food security.

“Deer meat alone was almost $1.5-million in a year. So if we were going to try to replace deer meat out with some other equivalent protein source, most households couldn’t afford to buy it, quite frankly.”