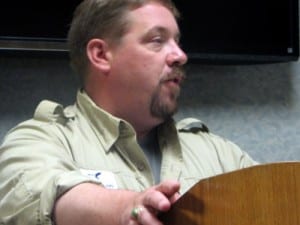 Southeast Alaska’s sport fishing guides have taken a more active role in the management of their industry, easing tensions with the commercial fishing sector.

But they wouldn’t mind a simpler formula to allocate halibut.

Heath Hilyard is the executive director of SEAGO, or the Southeast Alaska Guides Organization. He spoke to the Sitka Chamber of Commerce this afternoon (Wed 5-21-14).

Hilyard told the chamber that management agencies simply didn’t understand guided sport fishing, when some of the first rules were implemented.

Here’s a brief excerpt of his remarks.

Ten years ago we were put under a guideline harvest level — essentially a soft allocation target. It wasn’t supposed to be hard and firm, because it’s very difficult to predict how much the charter sector is going to catch as a whole, because it’s dependent upon angler involvement and angler effort. Anyway, it was a basic allocation regime and structure. And one of the problems was that one of the management agencies — the North Pacific Fisheries Management Council particularly — not understanding how the charter industry works, and started to put a number of management regulations intended to make sure we stayed within our allocation, and yet for about five years in a row we substantially exceeded that. And we’ve gotten castigated for that. And it’s true: We exceeded our allocation, some years by more than 100-percent. What I like to point out is that there’s never been any suggestion that on a broad-scale basis there was any sort of cheating or illegal fishing. The regulations that were placed on us were not adequate to maintain our allocation level.

Since then, the North Pacific Council probably overreacted, Hilyard said, and clamped down too far on sport guides. SEAGO was founded three years ago, primarily by guides based in Sitka. The organization has been active in helping implement a halibut catch-sharing plan — which went into effect this year — where sport guides can lease unused quota from commercial halibut fisherman.
Not too many guides have registered to lease halibut, and Hilyard says SEAGO is hoping to modify the program to create a single pool of available commercial halibut for sport guides to lease from. That plan is some way off, but he’s confident that if guides keep their hand in the regulatory game, they’ll get there.

We’ve proven in the last three years that when the industry has a direct hand in establishing the management regulations that they have to operate under, it does the least amount of damage to us possible, given the circumstances. To say that the regulations we have to adopt are good, is not an accurate statement. But they’re the least bad we can possibly have.

In Southeast Alaska, non-resident guided sport fishermen are limited to one halibut per day, less than 44-inches in length, or over 76-inches in length. It’s called a “reverse slot limit.”

Hilyard said that throwing back a 55-inch fish was disheartening for some people, when they were on their lifetime trip to Alaska.

Asked by an audience member how the regs should be changed to avoid that situation he replied, “One fish a day, any size.”