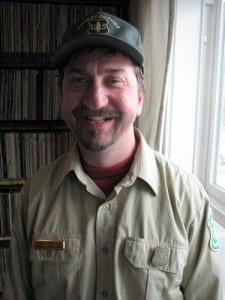 The Tongass National Forest has promoted a biologist with interdisciplinary skills to job of Sitka District Ranger.

Perry Edwards has been with the Sitka District for nine years, most recently in charge of the ecosystem staff.

But he also recently wrapped up a short stint serving as interim district ranger in Thorne Bay, and he discovered he liked the work.

“The roles, responsibilities, the everyday dilemmas that go with that are really exciting. You get to work with a lot of people and help make things happen. It’s internal, external with the public as well. And I got the bug.”

Edwards oversees eight employees in his current job, which involves silviculture, timber, fisheries, subsistence, and botany. It’s an unusual skill set, and apparently just right for the Sitka District: The Forest Service traditionally does not promote from within.

“It is rare. I have to admit that I don’t know anyone who has come up through the ranks of a district and become a district ranger. More commonly it’s from, not only another district, but another forest.”

Like all things Alaska, the Sitka District alone is larger than many National Forests elsewhere in the country. It’s about 1.8-million acres, depending on how you factor in the thousands of islands within its boundaries.

Nevertheless, the district staff has been contracting. The Northern Planning Team, which developed timber sales, has been disbanded in the nine years Edwards has been working in the district. Staffing in that time has been reduced from about 40 down to 25.

Edwards says the Sitka District is not unique.

“Overall we’ve seen that on the Tongass as we’ve seen funding drop, and the impetus for timber and some of the other things we had back in the day, when the Sitka district was quite a bit larger, have been reduced. We still have some of that work, which is great, but it isn’t what it was.”

Edwards is married to former Sitka assembly member Michelle Putz (as in “puts the book away”), who used to work in the district. The couple are active in a number of community organizations including the Sitka Global Warming Group and the Sitka Local Foods Network. Edwards has served on the board of community radio station KCAW for four years.

Edwards says that maintaining his friendships and connections within the community is one of the happiest aspects of his job. As he told KCAW’s Robert Woolsey, his work here is not quite finished.

KCAW – You’ll finally be able to perfect your salmonberry wine.
Edwards – Yes, but we won’t be using that in the work environment!

Perry Edwards will assume his duties as Sitka District Ranger for the Tongass National Forest in mid-July.