Studying what whales leave behind

He loves it so much he travels around the world’s oceans, scooping it up in plankton nets and studying it.  Why?  Because Roman believes that what whales leave behind, either through digestion and elimination, or the ultimate biological process of death, can tell us a lot about how oceans and even humans are connected, and may even help us tackle climate change.

Joe Roman’s eyes shine when he talks about his work with whales and their fecal matter. 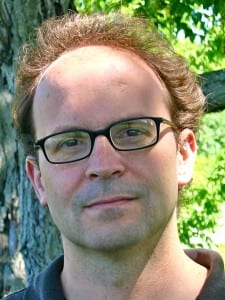 Whale biologist Joe Roman is the Scientist in Residence at the Sitka Sound Science Center. (Photo courtesy of The Gund Institute)

ROMAN: If you want to know it’s kind of liquidy, whale poop.

Roman is a conservation biologist, writer, and researcher at the Gund Institute for Ecological Economics at the University of Vermont.  Currently, he’s studying whale ecology  in new ways. For a long time, he says, scientists just thought of whales as passengers on the ocean, eating vast quantities of zooplankton and fish and then taking that food away.  But now, he and other scientists are looking at what happens after the whales eat.

“We see these when we’re out at sea, these large plumes: fecal plumes. It can be as large as our research boat,” he says. “And in there are tons of nutrients. So the whales dive deep to feed, they release the nutrients at the surface, and this really matters in the summer, when the growth of algae are restricted because there aren’t enough nutrients in the sea. So the whales can actually be increasing productivity in the areas in which they’re feeding.”

So, whales eat, they poop, the nutrients in their feces feed algae at the surface, and the ocean is more vibrant, more alive…healthier.  And this isn’t something that’s just happening in limited local areas, says Roman.  It’s happening everywhere whales travel.  And they can be big travelers.  Humpbacks in Southeast Alaska, for example, migrate great distances, all the way down to Hawaii.

“We think that they come here to feed, [and] they go down there where they’re not feeding, but they are metabolizing, so they’re releasing nitrogen into those areas as well,” Roman says.

Essentially, whales are great big fertilizers, enriching the world with their poop  .  Something similar happens when whales die, or “fall,” says Roman, but it happens at the bottom of the ocean, rather than the top:

“It often happens offshore in the deep sea, and it brings nutrients down to the deep part of the ocean, which don’t have a lot of nutrients,” Roman says.

Beyond sustaining ecosystems, when whales fall, says Roman, their bodies serve another purpose, one that could potentially affect all life, everywhere.

“It also sequesters carbon, so this may be a way of mitigating climate change, if we can restore whale populations throughout the world,” he says. “We’re seeing that now – you’re seeing that in Alaska. But throughout much of the world.”

Roman’s whale work connects with his other focus area – thinking and writing about endangered species.  He is the author of two books: Whale and Listed: Dispatches from America’s Endangered Species Act, winner of the 2012 Rachel Carson Environment Book Award.  Protecting a diversity of species makes for stronger communities, both ecological and human, says Roman.

He believes the endangered species act has successfully avoided extinctions.  And he thinks this accomplishment should be celebrated, by taking species that are no longer endangered off the list.

“We’re going lose some protections,” he says. “But we’re also going to show that this act is working and we can actually prevent extinction and allow species to come back.”

Joe Roman received his doctorate in organismic and evolutionary biology from Harvard University in 2003 and recently completed a Fulbright Fellowship in Brazil.  He will be in Sitka with the Sitka Sound Science Center  Fellowship program through July 6th, teaching a class on natural history writing, doing a public reading from his works, and…studying whale poop.

You can find a full list of his public events at sitkascience.org.