Killinger’s passion for the Tongass will survive his loss 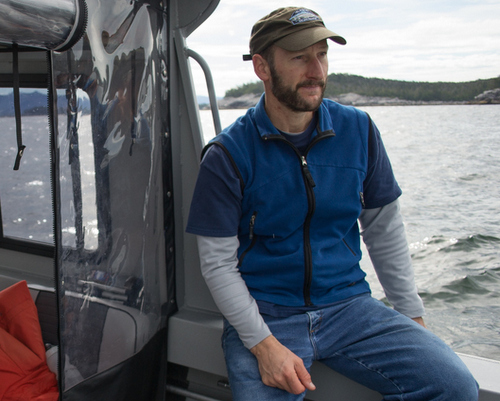 Greg Killinger in his element: On the water in Sitka Sound in 2013. (SCS photo/Bethany Goodrich)

Greg Killinger was a career Forest Service employee who — had he wanted to — could have worked anywhere in the system. When the 52-year-old’s body was found last Sunday (5-25-14) on Sitka’s Mt. Verstovia trail — an apparent heart attack — the news was met with shock and disbelief.

A memorial for Greg Killinger is planned for noon, Saturday May 31, at St. Gregory’s Catholic Church in Sitka. To learn more about Killinger’s career, visit the Tongass National Forest website.

“Staff officer” has got to be the most unglamorous job title in the National Forest Service. But it can be packed with meaning and responsibility, depending on the person who carries it.

“I can’t describe the hole that he’s left behind.”

Forrest Cole is the Tongass Forest supervisor. He says Greg Killinger was active in projects in fisheries, wildlife, watersheds, ecology, and subsistence.

Killinger was basically everything you want in a career forester.

“He was a great person in the woods, an avid outdoorsman. He was calm, and even-tempered, and capable of talking to anybody. He was very capable of getting projects done and on the ground.”

Killinger spent 31 years working out of Sitka, beginning as a volunteer. He was eventually hired as a fisheries biologist, and would go on to serve in many capacities, including being detailed to Washington DC to work with the national watershed staff, acting ranger stints in the Chugach National Forest in Cordova and in Admiralty Island National Monument, and eventually becoming district ranger in Craig.

This is the resume of someone who could work anywhere in the country. Forrest Cole says Killinger remained in the Tongass by choice.

“He’d go fishing before work, and always tell us how many fish he’d caught first thing in the morning. He was an avid outdoorsman, and Alaska fit his style best.”

“Greg was a leader and mentor to so many people,” says Andrew Thoms, director of the Sitka Conservation Society.

“He was the connector and catalyst for so many things happening. He always gave credit to someone else: The staff he supervised and the partners he worked with. He never wanted to take credit for himself, he always wanted to give it to other people.

The nation’s forests are in transition from primarily old-growth logging of the last century to a more holistic form of management for this century. The Sitka and Craig Ranger Districts have been at the epicenter of this change in the Tongass, with several watershed restoration projects completed or underway. Killinger provided the energy that helped propel this major shift on the ground.

“Honestly, Greg’s irreplaceable. But at the same time the way he’s inspired the people that worked with him, people will take up what he started. People will continue doing what he initiated and got moving, because of the force of his personality, his vision, and his leadership.”

This kind of tribute — from a conservationist to a forester — would have been unheard of when Killinger began his career 31 years ago. Thoms says he and Killinger saw eye-to-eye from the very first time they met.

“There’s an ethic among conservationists that it’s your responsibility to leave the place better than you found it. And for me, Greg exemplified that more than anybody.”

And of course, any conversation about Greg Killinger eventually leads to his appetite for the outdoors.

“Greg was the kind of guy who’d go out on a fishing trip, and even if he didn’t catch fish, he’d be as happy at the end of the day as if he came home with his coolers filled.”

But often those coolers were filled, and — as Forrest Cole has said — Killinger loved to spread the joy, among colleagues who may not have been getting out as much as they would have liked. “To hear him talk about it at 8 in the morning got a little old sometimes!”

Cole says the Forest Service, even nationwide, is a relatively small family. News of Killinger’s premature death from natural causes has traveled far. “I’ve been getting 4 or 5 emails every half-hour,” Cole says, “from people around the country who ran across him.”