Wrangell’s new boat lift is the biggest in Southeast 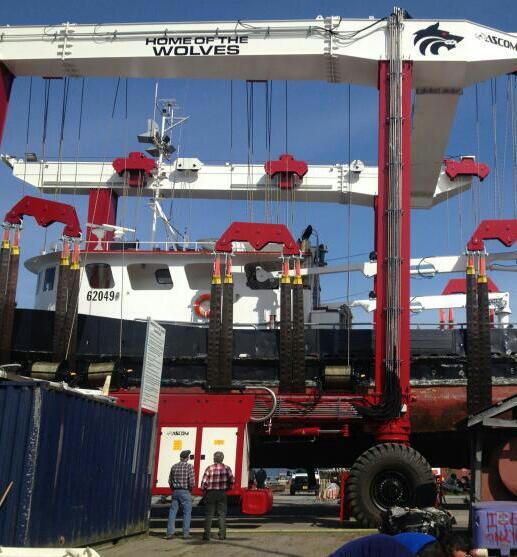 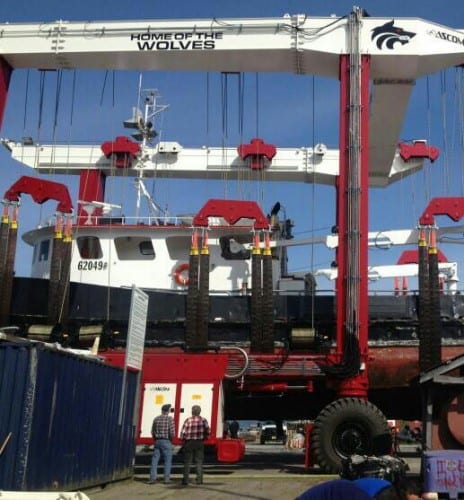 Wrangell’s new boat lift is Southeast Alaska’s largest. It means more big ships can be maintained and repaired without leaving the region.

A 98-foot fish-packer out of Ketchikan was the first to be hauled out of the water.

Wrangell Harbormaster Greg Meissner says it was the St. Jude.

“He’s been chomping at the bit and working with us and trying to adjust his schedule to get hauled out. So he’s happy he’s coming out of the water. He’ll do some work on the boat and get it out when the season starts,” he says.

The new 300-ton lift is the biggest in Southeast and one of the largest in Alaska. 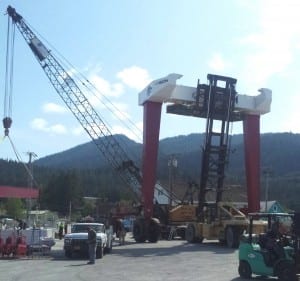 Wrangell’s new 300-ton boat lift was assembled on site in May. (Renee Claggett/KSTK)

“I believe that it will keep a lot more repairs on those larger vessels happening in Wrangell,” says Erich Schaal deputy port engineer with Juneau’s Docks and Harbors office.

“Right now, those vessels either have to go out to Kodiak or back down to Washington somewhere … to have repairs made,” he says.

The lift was built by the Italian company Ascom  and cost about $1.3 million. It’s part of a larger project mostly funded by a legislative grant.

Harbormaster Meissner says some of the funds were used to improved the new lift’s support structure.

“The dock was built to hold a 200-ton machine in its payload. So we had to go in and strengthen the dock to handle the payload, plus the weight of a 300-ton machine,” he says.

Other coastal Alaska communities have been adding or expanding boat repair and maintenance facilities. Some installed lifts, from 5 to 200 tons. Others added storage or industrial space.

And in some cities, it’s a private venture rather than a government service.

“The lift itself could probably fulfill all the needs of Southeast Alaska … but the uplands of where these repair jobs are bottlenecked. You need a lot of space for the vessels that a 300-ton lift can pick (up),” he says.

Wrangell’s already looking at that issue.

“We’re looking at maybe the mill site at 6-mile, and someday the possibility of actually moving a portion of the boat haul-out facility out there where there’s a lot more room. But I think that’s a long way in the future,” he says.

Wrangell also operates a 150-ton lift. Both are part of a larger effort to expand the community’s marine service center.

The new lift began hauling boats in the latter part of May.

Harbormaster Meissner says it was supposed to be up and running sooner.

First, a competing company, Marine Travelift, challenged the city’s contract award. Then, a shipping company sent it to the wrong place.

“They brought it across on a ship to Tacoma. And they took it from Tacoma to Seattle and inadvertently took it to the barge that went to Anchorage. And since nothing said Wrangell on it at the time, off to Anchorage it went. So it took a two-week detour on the way to Wrangell,” Meissner says.

He says the municipality did not pay for the extra shipping.