Sitka’s Odess Theater: A ladies’ room (and lady) like no other 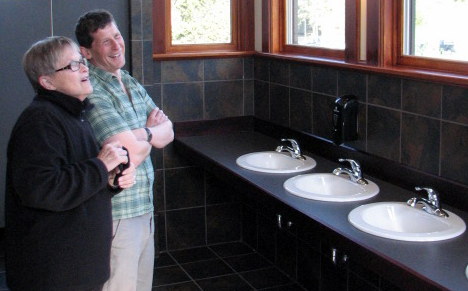 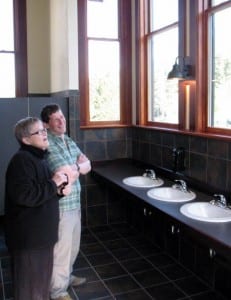 Contractors working in the performance and rehearsal spaces in the National Historic Landmark are installing final trim in staircases, and buttoning up electrical outlets and switches.

But contractors wouldn’t be working at all in the building without the support of a remarkable benefactor: A woman from the deep South who’s taken a hands-on interest in getting this job done.

I walk in the side entrance of Allen Hall, duck under some scaffolding, and meet Carol Odess — the woman whose pocketbook and passion for community has transformed a crumbling auditorium into a palace. I’ll talk more about the palace part in a minute.

I’m still trying to connect what little I know about Carol Odess with the woman standing here in a dusty black sweat pants, sweeping up under the trim carpenter’s saw table.

Allen Hall has been a hive of activity since the trustees of Sheldon Jackson College handed over this campus to the Sitka Fine Arts Camp in 2011. Volunteers played a major role at that time shoring up the building and making it habitable. I was one of them — part of a gang of people who unloaded a flatbed trailer of drywall on the promise of a bowl of hot chili and unlimited brownies.

But the crews working here now are the pros. Trim carpenters and electricians, putting the final touches on the building. Hugely expensive work paid for by Carol Odess of Chelsea, Alabama.

She won’t say how much. But it’s enough for this space to now be known as the Odess Theater.

“Some of the advice I got was don’t start this building,” says Roger Schmidt, director of the Sitka Fine Arts Camp. “It will be your Eastern Front. Your Waterloo.”

Schmidt – I can’t imagine that it wouldn’t be the dream of every non-profit director to just have a major funder who gets it. Who believes in the mission, and supports it.
Odess – I’m basically trying to convince Roger to let me worry about this building. This will be my baby, and he can go and look after the other children. 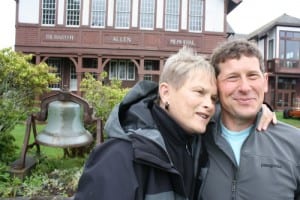 Odess and Schmidt in front of Allen in 2012. Odess has given three major gifts to SFAC in memory of her husband, Jack, who wanted the money “to benefit as many people as possible.” (KCAW photo/Ed Ronco)

The Odess Theater is really named for Carol’s husband, Jack , a physician who, with the help of his brother — a financial manager — shepherded his earnings into millions. There’s another Odess Theater on the campus of University of Alabama, Birmingham. You might call this their hobby — outside of fishing — which is how the couple came to Sitka in the first place. The story of Carol’s walking by the boarded up Allen Hall shortly before her husband’s death in 2003 , and deciding to help out has been told before.

The story of the incredible women’s restrooms hasn’t. Carol invites me in.

KCAW – Do you want to run ahead and check?
Odess – No. I’m the only woman in this building… Can you look and see how beautiful that is? The view of the mountains.
Schmidt – We thought about leaving the stalls off the doors.
Odess – Some people are into kinky and that’s okay!

Above the sinks is a row of beautifully trimmed double-hung windows, at least six feet high, framing a spectacular view of the mountains from every stall. You wouldn’t find a more impressive bathroom in Buckingham or Versailles.

“We sometimes like to come in and do whatever.”

The Odess Theater in Allen Hall is slated for completion this summer, before the 900 students in the Sitka Fine Arts Camp begin to roll in. Carol Odess has extended her summer visits into months at a time. She says you can find her at almost any performance in the building, sitting in the back row. If there’s any money left after this space is done, Odess wants to put it toward new roofs on the 19 other buildings on campus.