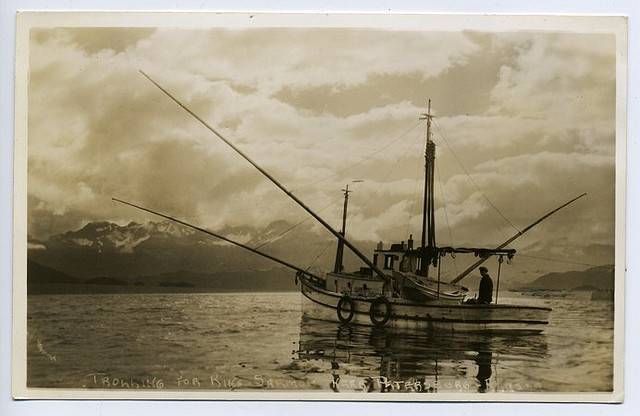 This is a salmon troller fishing near Petersburg in the 1930s. (Flickr photo/born1945)

If you’ve noticed a lot of empty slips in local harbors today, there’s a reason for that: Tuesday (7-1-14) is the first day of the summer troll opening for king salmon — and Southeast fishermen are looking at a record high target harvest.

Trollers will be going after more than 171,300 kings in this first opening. Skannes says it’s the largest target ever for the July opener.

And it’s significantly higher than last year, when the July target was just 62,864 kings.

To put those numbers in perspective, there will be about the same number of fish available to trollers in the next two to three weeks as were available to all gear groups — trollers, seiners, gillnetters and sport fishermen — for the entire year last year.

Skannes says a number of things are contributing to the high target, including big expectations for Chinook returns in the Pacific Northwest.

“The Columbia River is expecting an enormous return this year, a record-breaking return,” she says. “So some of those stocks are what we call driver stocks for the Southeast fishery. That means that they contribute significantly to what we are harvesting up here, so we benefit from their abundance.”

Skannes says it’s always hard to know what causes big returns, but it might be a matter of what’s happening way off shore.

“The leading hypothesis is that productivity is driven mostly by ocean conditions,” she says. “So years in which we have a good abundance, that is in part explained by ideal or favorable ocean conditions.”

Fish & Game hasn’t set the length of the July opening yet. That will depend on how fast the fleet approaches its target. But Skannes estimates it will last between 14 and 21 days. And she expects there will be a second opening in mid-August, following the closure of the Coho troll fishery. Last year, there was no second opening, because the fleet caught the entire summer quota in six days in July.

Skannes says she expects more boats to participate in the fishery this year, attracted by the large quota and long opening. Last year, 714 permit-holders fished. That was lower than in the past, perhaps because of the low quota and short season. This year, Skannes says she’s expecting about 800 boats.

And last year, fishermen got an average price of $4.61 per pound for king salmon, according to number compiled by Fish & Game. Skannes says that so far, during spring trolling, fishermen have seen an average price of $5.52 per pound. She expects that summer prices will probably be somewhat lower than that, because of the higher volume of fish coming in.

Meanwhile, trolling for chum salmon has gotten off to a slow start. In recent years, Fish & Game has seen a fairly significant fishery in June in Icy Strait. This year, Skannes says, it was almost nonexistent — although numbers have picked up in the past week.