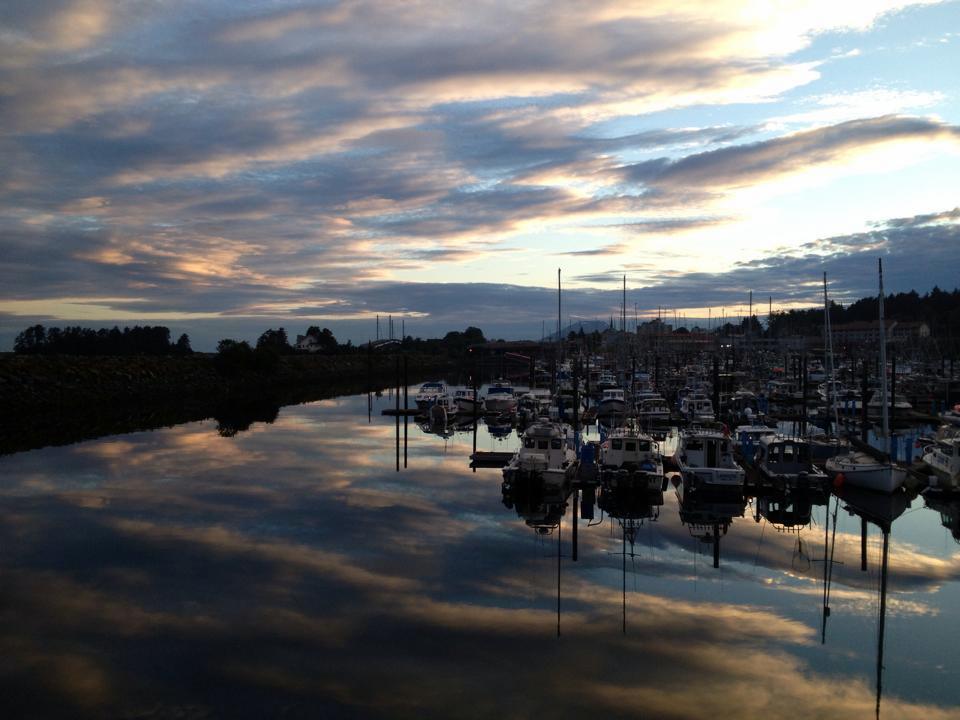 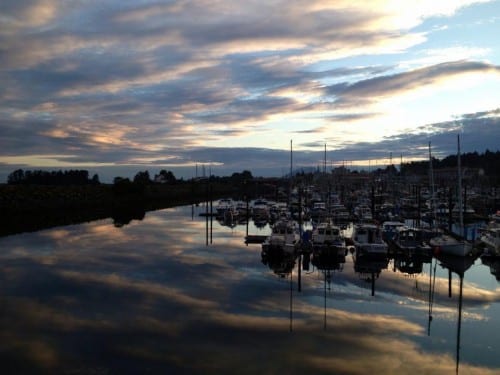 A July sunset from the Sea Walk “spur” on Crescent Harbor. The city’s insurer requires a guardrail to be built here. (KCAW photo/Shaleece Haas)

If the dream of bulk water sales in Sitka ever becomes a reality, the city will be ready.

The Sitka assembly last night (Tue 7-8-14) revised the way revenues from water sales will be handled, in order to avoid flooding any single department with money.

The water ordinance, a guard rail along the sea walk, and floathouses were the highlights of an unusually speedy assembly meeting.

Sitka hasn’t sold any bulk water from Blue Lake yet, but the price it charges for the exclusive rights to buy that water is getting pretty steep. Since 2006, when it signed a 20-year agreement with True Alaska Bottling, Sitka has received two payments of $100,000, one payment of $150,000, and most recently, a payment of $1-million.

Until that $1-million rolled in, the allocation of water revenues was straightforward: half for the general fund, and a quarter each for the water and electric funds.

The new language deposits all the money from water sales and contracts into a single account — which would then reimburse expenses of any fund which incurred costs related to producing those sales.

Administrator Mark Gorman said it was a precaution against the day when — and if — the real money ever came in.

“If we hit paydirt on water sales, this ordinance will be reviewed again. It just to set in place a template that we can move forward on. But if we start pumping $90-million of water a year, we’ll probably be looking at these ordinances again.”

But assembly member Phyllis Hackett wasn’t so sure. In past assembly meetings, whenever the discussion turned to the prospect of water sales, a discussion of the challenges in “managing success” usually followed.

“All of the sudden when there’s lots of money coming into departments, it gets really difficult to change.”

The city’s chief administrative officer, Jay Sweeney, assured assembly members that — should substantial amounts of money start to flow from water sales — the new structure created a “protection mechanism” to keep potentially millions of dollars being diverted into the water or electric funds. He suggested that it would be easier to reimburse those departments for their expenses, than it would be to extract money that had already been allocated.

They spent $57,000 to have CBC Construction install a guardrail on the yellow cedar boardwalk along the top of the Crescent Harbor breakwater, with $40,000 of that funding coming from the cruise passenger head tax.

It’s officially known as the Sea Walk “spur,” and Sitka’s insurance company objects to the absence of a guardrail, even though one is not required by law.

Deputy Mayor Matt Hunter was ready to bite the bullet.

“Well I was one of the members who definitely wished we didn’t have to do this. The insurance company makes it clear that it’s a strong recommendation. And I appreciate staff coming up with a design that saves quite a bit of money.”

The guardrail will have a yellow cedar top rail, like other portions of the sea walk that has rails, and a single stainless steel cable at mid-height. Other designs came close to $200,000 in cost.

The only alternative to not having a guardrail would be to add gravel fill along either side of the boardwalk, and top it with soil and plantings of some kind, to soften a potential fall. That option was also ruled out.

In addition to the guardrail, Sitka’s insurer, Alaska National, will require a “Pedestrians Only” sign at the head of the walk.

In addition to the guard rail, the assembly spent $165,000 to replace the floatation under fingers 5 and 6 of Eliason Harbor. These are the two outermost fingers where most transients tie up. The fingers have settled somewhat. The sole-source contract was awarded on an emergency basis to WS Construction, the only local business which provides this kind of work.

Having shipshape harbors will be important when houses move in. The assembly last night adopted two ordinances creating a regulatory structure for floathouses in Sitka’s harbors. But they can’t be any old thing that floats: the new regs actually require that the floathouses’ architecture complement the harbors. That means, among other things, pitched gable roofs, and lap or shingle siding.

Assembly member Phyllis Hackett thought some of this language was too restrictive, and she proposed an amendment:

The architecture of the structure must have the intent of enhancing the aesthetics of the harbor environment, while being in compliance with the building safety code. In keeping with this intent, architectural deviations from this intent from Section 13.15.03.0b must be approved by an ad-hoc committee appointed by the administrator.

The ad-hoc architectural committee will be populated by one member each from the Port and Harbors Commission, the Planning Commission, a public works staff member, one planning department member, and one member at large. Hackett’s amendment does not require that any architects sit on the committee.

The amendment and ordinance both passed unanimously. The administration hopes that the introduction of floathouses will help ease the affordable housing crunch in Sitka.

And while it’s not a house, it floats. Sitka administrator Mark Gorman said the city had just taken delivery of a 32-foot long fish waste scow, paid for by grant funding. He invited everyone to stop by the harbor sometime and take a look at the new boat.