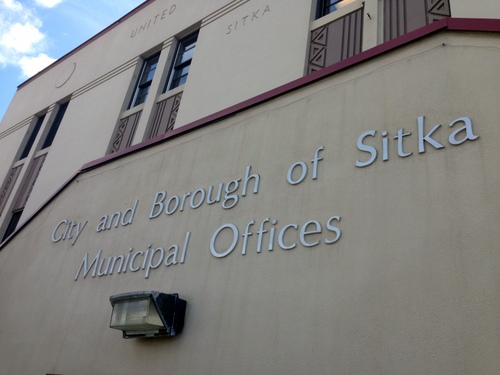 Unlike most other departments, the city administration has no master plan. (KCAW photo/Robert Woolsey)

City hall will be getting a tune-up this summer, from consultants who have all spent time in local government elsewhere around the country.

Municipal Solutions, based in Phoenix, Arizona, was in Sitka last week to meet with city officials. They’ll spend the next few months reviewing operations in city hall from the ground up, and — hopefully — identify efficiencies and savings.

Just about every city department — water, electric, public works — has an updated master plan. This winter, the Sitka assembly decided that the General Fund, which pays for the city administration, should also have a plan, and it set aside $52,000 to buy some outside help.

David Evertsen is the CEO of Municipal Solutions.

“Organizations are not static. They’re dynamic. They’re constantly changing. And so to reevalute what we’re doing as an organization, the functions we’re performing, the structure, the staffing — needs to be done from time to time.”

Evertsen himself is a former municipal administrator, in towns in Colorado, Montana, and Arizona. Since establishing Municipal Solutions, his firm has helped 300 communities around the country to evaluate their operations.

He’s also consulted internationally. While the US is nation-building in Afghanistan, Evertsen’s been handling seemingly mundane matters in that country. Like how to license 500,000 drivers.

“The Kabul Traffic Directorate could only process 26,000 licenses a year. And the licenses expired at the end of the year. So how did 474,000 people get drivers licenses? Not only is it a safety issue, but it’s also a fiscal issue. It was over $47-million uncollected.”

“Because I come back also with ideas for my own municipality. There are things about Sitka that I want my community to emulate.”

This is Rick Davis, a senior associate with Municipal Solutions, who will be doing much of the hands-on work for Sitka — while moonlighting. He’s currently the city manager of West Jordan, the fourth-largest city in Utah.

“For a community of about 8,800 people, you’ve got the responsibilities that usually would be associated with a municipality that’s much larger. In my community of 110,000, I don’t think I have half to do as Sitka does. So it changes the context in which we look at the city.”

Because Sitka is isolated, it has unique challenges, but Davis says the similarities with other communities far outweigh differences. Municipal Solutions began its examination of Sitka with a paper review, then this site visit to meet staff members. A preliminary report will follow within a month, with a comprehensive final report after that, which Davis will deliver in person.

The report will be based on technical information, but should be easy to follow for lay people. Davis says it will also point Sitka to some hard questions.

“In order to remain sustainable, it will force the community to come together to be very specific about the priorities that they need to focus on in the future. Because resources are never going to be enough to do everything that you want to do.”

The use of outside consultants in Sitka has been controversial. The assembly recently reconsidered spending $250,000 on a review of the city’s solid waste management system, in favor of using in-house expertise. Sitka administrator Mark Gorman brought a lot of organizational experience with him when he took the job last fall. But he agrees that this job might be best done by someone outside looking in.

“Certainly the assembly has raised the question about depency on outside consultants, and I think that’s a very legitimate question and concern, that we have to be fiscally responsible how we use our citizens’ dollars. In terms of bringing in outsiders, I kind of fall back on the expression, You Can’t be a Prophet in Your Own Land.”

The 2015 budget for the Sitka General Fund is close to $27-million. Again, Municipal Solutions will be paid — including travel — roughly $52,000 for the evaluation.