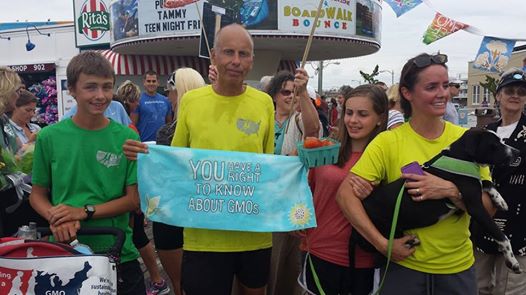 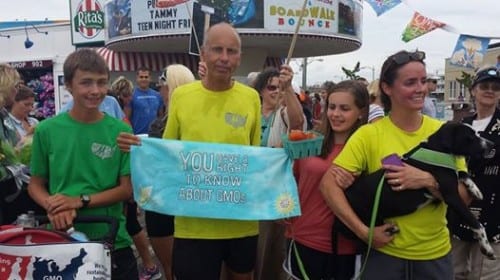 David Wilcox (l.), Brett Wilcox, Olivia Wilcox, and Kris Wilcox are greeted on the boardwalk in Ocean City, NJ, as they wrap up their 6-month, 3,000 mile run. (RunningTheCountry.com photo)

A father-son team from Sitka has completed a six-month run across the United States.

Brett and David Wilcox ran into Ocean City, New Jersey, on Saturday (7-19-14), after covering 3,000 miles on foot. The project was intended to raise awareness about the hazards of genetically-modified foods.

There were some lonely times for the Wilcoxes, especially in the vast stretches of the Southwest.

But on the eastern seaboard, that had changed.

“We hit the big bridge going into Ocean City, and got a police escort. We were joined by a local runners club, so there were 10 or 12 of us. Kris (Wilcox) joined us. And with a police escort, they would stop all the traffic, even if we had a red light we got to keep running through it. And we ran right on to the boardwalk. There was a huge crowd waiting. They had been informed that we were coming. They were very excited. People had passed out GMO-free USA seeds. So they had some inkling of what our mission was….And it was the culmination of six months of actual running, and a year-and-a-half of preparation and time leading up to that moment.”

53-year old Brett Wilcox and his 15-year old son David are now the first father-teen son team to run across the country. They started on January 18 in Huntington Beach, California. David is the second-youngest runner to accomplish the feat. 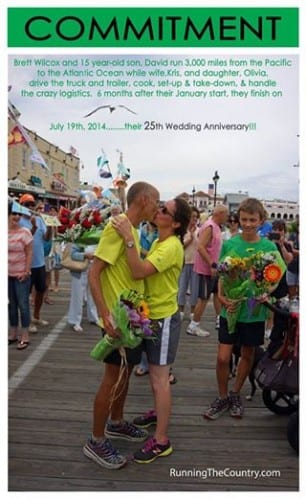 Covering 20-miles a day, six days-a-week, Brett Wilcox is glad the United States is only 3,000 miles across.

“I’m down 8 pounds, and I bet David is down a few pounds, and up a couple of inches. I don’t think we could sustain that sort of schedule long-term. I think we were eating muscle. And we’re pretty worn out and pretty exhausted.”

The Wilcox family was on a campaign to raise awareness about GMO’s — or genetically-modified-organisms — and their prevalence in the American diet. Trying to live by their ideals, they were often frustrated trying to buy GMO-free food in stores along the more remote parts of their route.

But Wilcox says their message seemed to catch up with their run as they crossed the Mississippi and entered more densely-populated areas of the country.

“The final few days were pretty epic. There were some key people in Pennsylvania and New Jersey who got hold of our run, and really turned it into a mission. From GMO-Free PA and GMO-Free NJ, and they did all sorts of things to make sure the media was aware of what we were doing.”

The Wilcoxes maintained a website and blog during their run, and the number of media events increased significantly as the family moved eastward — and almost sabotaged their grand finale, as they ran to a radio interview only 14 miles from the finish line in Ocean City.

“And I took a wrong turn, even though we have the phone which told us exactly where to go. So 14 miles turned into 16 miles, and we made it to the interview with three minutes to spare, dripping wet.”

The Wilcoxes gave up their jobs, and started an Indiegogo campaign to accomplish their activist run. Their house and apartment in Sitka are leased through August. Though he’s optimistic that he’ll be able to get his old job back as a behavioral health counselor, Brett Wilcox and his family are essentially jobless and homeless.

KCAW – Do you feel it has all been worthwhile, or is it too early to tell?
Wilcox – Right now I would say it has absolutely been worthwhile. It’s been very challenging, very difficult. Day-by-day struggles just making it work, and dealing with the exhaustion and the potential injuries — it has been hard. But I wouldn’t want to have missed this experience for anything.

David Wilcox suffered from an injury for part of the trip. His dad credits a chiropractor in Pennsylvania for diagnosing and correcting the problem. David will be entering 10th grade in Sitka this fall, where his ambition is to try out for the Cross-Country team. Olivia will be entering 8th grade.

And due to some last-minute re-arranging of the itinerary, Brett and David crossed the finished on Saturday, rather than on Monday.

For Kris Wilcox, it was a special day.

“I did tell them that this would be a great wedding anniversary gift for me, if they finished on the 19th.”

Brett and Kris have been married 25 years. They’re headed to Washington DC next, for some additional activism on GMO’s, and plan to be back in Sitka sometime in August.