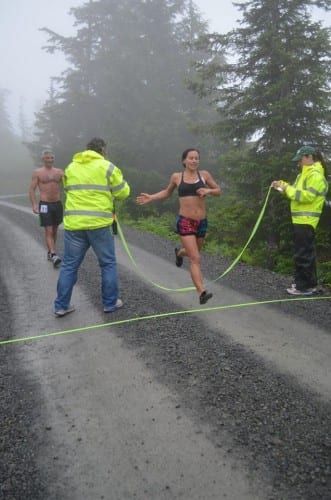 On a day that seemed almost guaranteed to produce no record times, two Sitka women on Saturday (7-19-14) crushed the course record in the 21st Alpine Adventure Run.

Tasha Folsom took first place in the women’s event, with a time of 1:18:10 — a full two minutes faster than the record set last year by New York runner Emily deLaBruyere.

Runners encountered steady rain and winds of about 20 miles per hour on the Gavan Ridge.

“I’ve trained in that crappy weather multiple times this season. So I didn’t have to adjust much of anything to get through the course on a wet day.”

Folsom also competed in Alaska’s other classic mountain event, Seward’s Mt. Marathon race, on the 4th of July. That event features a 3,000-foot climb straight up the mountain, and then a wild descent nearly straight down. She finished 13th overall for women in her first time out.

Folsom is not quite sure how Mt. Marathon played in to her success in the Alpine. She believes the Alpine requires more endurance for the long ridge run, while Mt. Marathon requires a lot of strength.

She was surprised to claim the Alpine course record.

“You know, I just wasn’t feeling it the entire race. They told me my time and I just didn’t believe it. I thought, Nah, people are playing a joke on me.”

In second place for women, Sitkan Emily Routon also came in under the previous record pace, finishing in 1:19:58.

The Alpine Adventure Run originated 21 years ago as an Eagle Scout project by Josh Horan. 15 runners participated in that first event. Horan’s mother, Christine, has remained race director ever since. The race is now capped at 75 participants, and usually fills within two hours when registration opens in April.