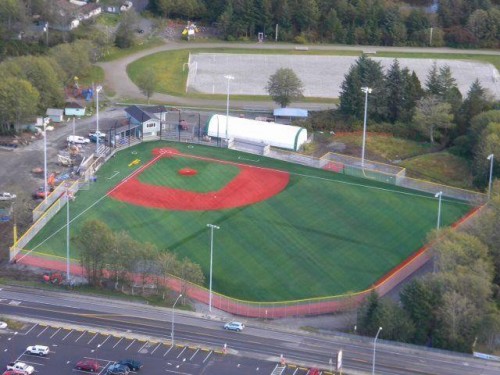 Girls have played softball in the all-new Moller Park, but head coach Bob Potrzuski says it’s not equity “when you feel like someone is letting you use it.” (KCAW photo)

A multi-million dollar baseball field in Sitka has opened the door to a possible civil rights investigation based on gender discrimination.

The US Department of Education’s Office of Civil Rights notified the Sitka School District in July that it had received a complaint about the new field, and the district’s alleged failure to provide comparable practice and competition facilities for girls’ softball.

The name of the law is common parlance for anyone involved in high school and college sports: Title IX. Originally passed into law in 1972, Title IX bans discrimination in all aspects of publicly-funded education, but it’s been the cornerstone of the development of girls’ sports programs across the country.

Sitka’s $2.6 million Moller Park has been the subject of a simmering Title IX dispute since it opened in 2012. And district officials have tried to make girls feel welcome there.

“I believe that the district really has made great strides.”

Bob Potrzuski is head coach of the Sitka High Softball team. He says the district bought a portable pitcher’s mound that could be removed for softball. There’s also a temporary fence to bring in the outfield, and moveable bases — all modifications for softball use.

“Some of the buzz in the community is that by modifying Moller Field, that our girls are really second-class citizens. You know, whether I agree with that or not is really immaterial. What matters is what do the girls feel?”

The Office of Civil Rights has asked the Sitka School District for extensive documentation of its high school sports programs. In a three-page letter, Timothy Sell, senior attorney for the OCR in Seattle asks for completes lists of all on-site and off-site athletic facilities used by district teams, their age and condition, the availability of locker rooms, and whether any facility is used exclusively by any particular team.

District superintendent Mary Wegner says she’s complying in full with the request. She also says the district is on track to resolve the complaint, which remains anonymous in the early stages of the process.

“We have good documentation that our teams are working together, that our community cares about supporting sports and active lifestyles for all of our citizens and all of our students. And we don’t know where it’s going to go.”

The last measure — an investigation — is of concern to many in the community, since baseball is not the only program in a Title IX gray area. At a special School Board hearing in the fall of 2012, some observed that the relatively recent additions of football and soccer may not stand up under the close scrutiny of a Title IX investigation.

Sitka has had its share of championships: Several in baseball, including just this past spring, in swimming, in debate. Bob Potrzuski’s softball teams won four consecutive state championships through 2013. Clearly, there are strong programs here. But Potrzuski says that doesn’t really matter, when a softball player can’t look at the smooth, green turf and brilliant lights of Moller Park and think, That’s my field.

“I don’t feel like the girls have ownership in their part of that field, as of yet. And really that strikes me as being the core of what Title IX is about. It’s not about producing collegiate athletes. It’s about creating a society in which a little more than half of the human beings feel like they’re on equal footing with the other half.”

To that end, the City of Sitka — which owns Moller Park — has placed a new softball field on its list of state legislative priorities for the coming year. If passed, Vilandre Field — next to Blatchley Middle School — would get $1.5-million in improvements — primarily for softball, but it would also be suitable for little league and other sports.

What Title IX does not require or encourage is the reduction in opportunity for one gender to create parity for the disadvantaged gender, so baseball is not at risk of being forced off Moller Field. Superintendent Mary Wegner is hopeful for a new field at Blatchley — along with many other improvements — but until then she says the district is committed to sharing Moller, and working toward a resolution of the complaint short of a full investigation.