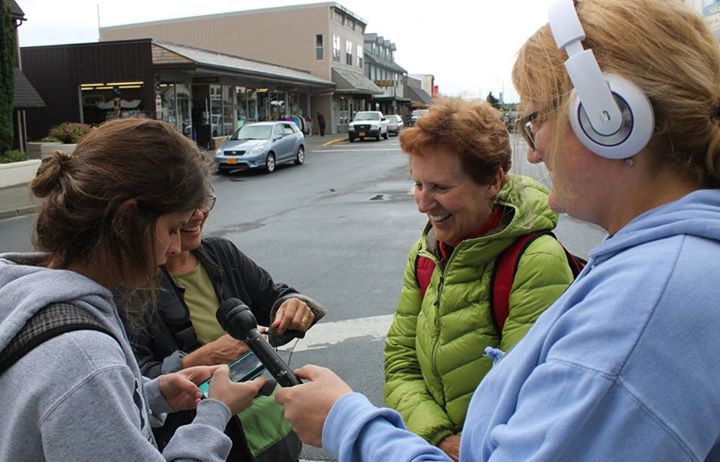 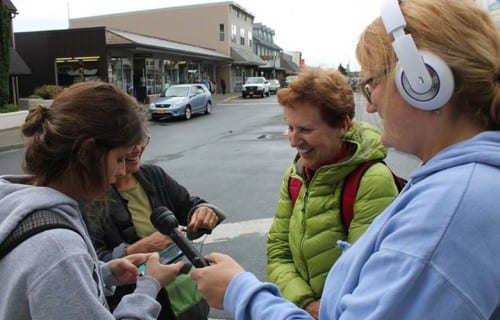 A local Sitka non-profit called Artchange expanded its reach this summer, thanks to the addition of three Yale University interns. Artchange is a project of a local filmmaker, who asked each student to put a lens on a different aspect of the community — tourism, transportation and food. But they all shared a common goal: To get to know the people and places of Southeast Alaska.

Iolanda Depizzol came to Sitka from Brazil, via a one-year exchange program at Yale University. She is one of three summer interns with Artchange, a non-profit spearheaded by local independent filmmaker Ellen Frankenstein. Over a two-month span, Depizzol created the first installments of Ask A Local, an audio story tour. It’s designed to guide tourists along Lincoln and Katlian Streets while listening to personal stories narrated by locals.

…When I came to Pioneer home…we got married on Castle Hill…Lincoln Street was the main drag…I first moved here in 2000…one day he took his boat into town….

“Most of the time, the tours happen in an impersonal way. It’s more historical and informational data. We wanted to try to bring the tourists closer to the people who live here, because the people is who make the city happen. Especially here in Sitka where the community is so important.”

Depizzol spent her time interviewing dozens of Sitkans, asking personal questions and weaving their memories into a narrative aimed to capture Sitka’s soul.

“Mostly we are interested in knowing their backgrounds. So if they didn’t grow up here, where they are from, how did they end up coming here…try to ask about Sitka, how did they feel about Sitka when they got here, what do they miss when they leave, what are their memories walking down the streets come to mind…we are trying to gather different kind of stories, getting a love story, something more political, something funny…and just trying to make this whole thing compelling for the tourist.”

Alina Aksiyoten Benardete hails from Mexico City, the daughter of a New Yorker mother and a Turkish father. Her project was wholly focused on the Ride, Sitka’s transit system, a joint project of the Sitka Tribe and the Center for Community.

Benardete said she was initially skeptical that her summer project – in a town she’s never heard of – wouldn’t make a difference in the world.

“I think coming here and doing the project and immersing myself in the lives of different people. It makes the thing you thought was small really important and really big. I think it’s special working here in Sitka because what you do matters.”

Lucy Wang had just completed her freshman year at Yale when she applied for a summer internship in Sitka. Wang’s main project is called What Sitka Eats, in partnership with the Sitka Local Foods Network. She made a Tumblr site documenting local dietary staples and Sitkans’ relationship with their food. In doing so, she said she learned new skills for her own diet.

“I’ve been able to live off the land a little bit, I went and harvested some seaweed and then I ate it and it was really good.”

Like Benardete, Wang had never heard of Sitka before arriving here. For students, this community — and the state — have the right combination of allure and interest to make a worthwhile summer.

“I had never been to Alaska before, in fact I’ve never been west of Chicago. I’m really excited to be here and do some soul searching in Alaska.”

The number of internships offered in Sitka keeps growing. State representative Jonathan Kreiss-Tomkins began the Bulldogs on Baranof program while he was still a student at Yale. Dozens of students — and post grads — from other universities are now involved in a variety of programs.

“It’s really snowballed and over the last four years, counting this year, there’ve been gosh 140 college students who have come to Sitka. And it’s spread beyond Yale, which is where I went, to other colleges around the country. So Sitka’s getting this huge influx of young people who are really excited to be here and dedicate their time and energy to projects in Sitka every summer.”

In addition to the Bulldogs on Baranof, Kreiss-Tomkins has helped launch three other student programs in Sitka: The Sitka Fellows, which takes six applicants for seven weeks and provides them room, board, and studio space to develop an original project; the Sitka Service Fellows, which places post-grads in non-profit organizations around the community for up to nine months; and the Historical Restoration Internship. This summer, 26 undergraduates from around the country worked to restore a building on the historic Sheldon Jackson Campus.