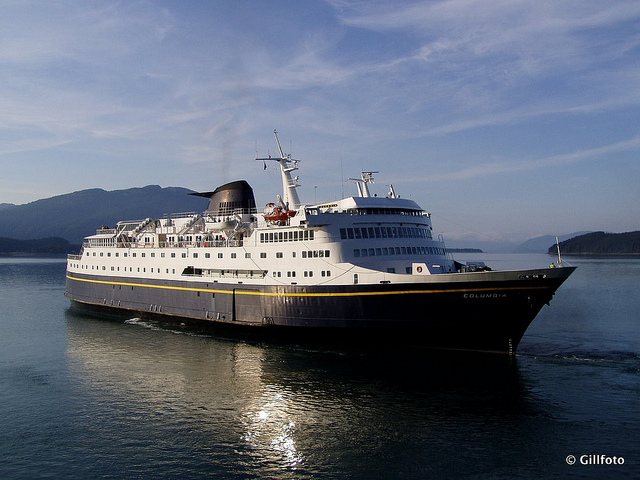 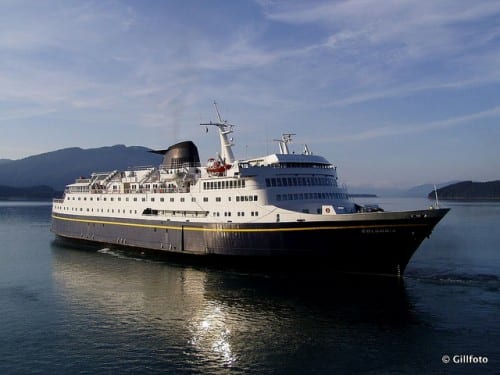 The M/V Columbia, recently re-powered, is not one of the three ships which could possibly be retired soon. (Flickr/Gillfoto)

State planners still see a road across Baranof Island as an important part of transportation infrastructure — though it may take decades to become reality.

The Department of Transportation held an open house and informational meeting in Sitka this week (8-20-14) on the latest draft of the Southeast Alaska Transportation Plan. And while maintaining and refurbishing the ferry system is high on the list of priorities for the region, major road construction — both in Juneau and in Sitka — remains on the books.

A public meeting on the draft plan is scheduled for Noon, September 2, in the Angoon senior center.

The Department of Transportation — or DOT — updates the plan every five years, with an eye to a twenty-year horizon. And it’s time again for an update.

Planning chief Andy Hughes has been touring the region with a PowerPoint slideshow highlighting some of the objectives of the update, and gathering feedback from the public.

Hughes and his team don’t decide anything. That falls to the people he calls “the decision makers” — the Marine Highway System, the DOT regional director’s office, the legislature.

But planners do steer the conversation, and the Southeast Alaska Transportation Plan relies on roads.

“It appears like the only way we really can connect communities on a daily basis — afford to — is with a road-shuttle ferry system.”

The primary roads in the document are the Mitkof Highway, which actually exists, and the Petersburg-Kake road, the cross-Baranof road, and the Juneau Access road — which do not.

“Juneau Access will allow Marine Highways to turn the mainline ferries around at Juneau, at Auke Bay. So the mainliners from Bellingham and Prince Rupert will not be going up to Haines and Skagway.”

But, again, Hughes is a planner, and doesn’t call the shots. Taking ships out of the Lynn Canal wouldn’t necessarily mean that they’d be allocated to the Sitka run.
There are other options.

The DOT’s preference for roads is based on cost. Even for very expensive roads, the state gets a big bang for its transportation buck, despite the fact that the ferries generate one-third of their own operating revenue.

The design is not without its appeal. A ferry terminal in Warm Springs Bay that served Sitka could be added to a network of fast-ferry stops in Chatham Strait that could include Angoon and Kake for instance.

But the Juneau Access Road, though it could be built along the coast, would transit several known avalanche areas. A road across Baranof Island would have avalanche issues, and other engineering challenges, that may simply make it impractical, unaffordable, or both.

Sitka resident Dorik Mechau thought the DOT was tilting at windmills by continuing to develop plans around the Baranof Road.

“I just wonder: At what point does your department decide, This is really not in any of its options?”

Hughes replied that the DOT had no hard-and-fast rules for taking a project off the table.

“I don’t think I could give you any definite formula or reason why a project would be removed at any point in time. But we do remove projects because either we determine that they’re no longer needed, or that we have higher priorities, or that it just doesn’t make sense.”

A cross-island road has its advocates. Sitka Tribe of Alaska transportation director Gerry Hope said improving access to Sitka — including a road across the island — remained very much a priority of his council.

Other aspects of the plan focus on less controversial items. The construction of two new Alaska-class ferries is due to go out to bid this winter. One of the three most-senior mainline ferries is due for retirement soon. Hughes said planners were retaining the Marine Highway’s Bellingham service, and its cross-Gulf service, and were looking at the construction of a new mainline ferry in 2025, and the replacement of the fast ferries a few years later.

In the more near-term, the funding and construction of an airport in Angoon is a top priority within the next four years.