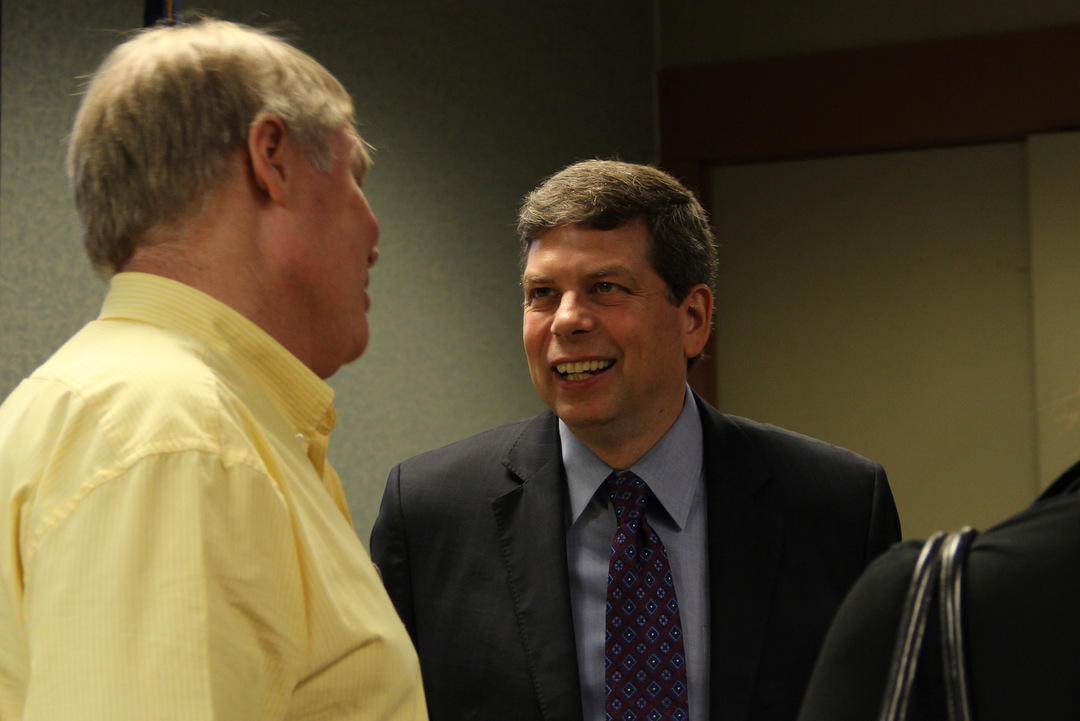 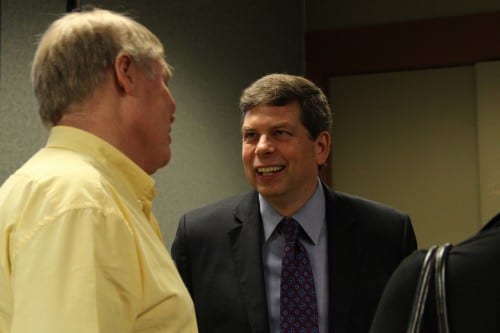 U.S.  Senator Mark Begich spoke to a full house at the Sitka Chamber of Commerce on Wednesday (9-3-14). During his talk, and in an interview with local media afterwards, Begich discussed his campaign, climate change, and the new unity ticket shaking up the governor’s race.

Begich told the Chamber that he spent a good chunk of his August recess introducing D.C. officials to life in Alaska. He described shepherding the new Secretary of Transportation, Anthony Foxx, around the state. It was Foxx’s first trip to Alaska.

Begich: You have to imagine the Secretary of Transportation – they travel with secret service. So they have police escort, SUVs, it’s kind of this big show. And we’re going to Nome! (Laughter)…We pull up in front of the municipal league conference, and it’s unbelievable. And I’m thinking: oh, wait until we get to Unalakleet (Laughter)…this is not gonna work out so well (Laughter).

But, Begich said, visits like that serve an important purpose.

“When you have a gentleman like that, who’s in charge of transportation, roads, air, ferry systems,” he said. “To have them understand what it takes to travel in Alaska, is an incredible experience.”

Begich also took issue with the idea that Congress is too dysfunctional to get anything done these days, pointing to the passage of recent bills on veteran’s care, workforce training and highway funding.

But he couldn’t get away from the issue of partisan gridlock. Audience member Jeff Budd asked the question that Begich said he gets “everywhere” — how do we end partisan bickering in the capital?

Begich himself is currently waging one of the most closely-watched campaigns in the country. He is being challenged by Republican Dan Sullivan, in a race that could decide control of the U.S. Senate.

Most recently, Begich has faced criticism for an ad in which he accused Sullivan of letting sex offenders off with light sentences while attorney general, and pointed to a gruesome murder as a result. The Begich campaign removed the spot from the air at the request of an attorney for the victims’ family. But in an interview, Begich defended the ad.

“It’s important that his record be out there, and people know what it is,” Begich said. “And there’s no question that his record, of an Attorney General letting people who are violent offenders or who people who committed sexual assault, with plea bargains, out early, is clear.”

The fact-checking website Politifact gave the ad a score of “pants on fire,” its lowest rating for political statements.

Meanwhile, Sullivan is running ads that highlight the sheer amount of outside money flooding into the race.

“Pretty soon you’re gonna want to do this to your TV,” Sullivan says in the ad, before shooting a television.

Both campaigns have benefited from major spending by outside groups, and Sullivan has criticized Begich for refusing to sign a pledge that would limit that spending.

Begich called the pledge a “political ploy” and issued his own challenge.

“You’re running for the US Senate. So whatever you do in your campaign should reflect what you will do in office,” Begich said. “So if he wants to have this agreement, then I also want him to commit to overturning Citizens United…and, two, full disclosure like we have in Alaska law.”

Alaska law requires ads by outside groups to disclose their top three donors. Citizens United is the Supreme Court decision that removed limits on election spending by corporations and unions. Begich supports a constitutional amendment to overturn that decision.

Begich said that another area of disagreement is climate change, which he called a “generational issue.”

“First off, you have to first acknowledge there is climate change,” Begich said. “And I think there is a stark contrast between me and my opponent on this.”

Sullivan has said there is “no concrete scientific consensus” on how much humans contribute to climate change.

Begich said the country needs to diversify its energy sources, develop major incentives for energy conservation, and invest in mitigation efforts now, to deal with the effects of climate change. He said he “could not believe” some of the impacts he has seen across Alaska.

But that doesn’t mean he supports pulling back on oil and gas exploration. If that seems like a contradiction, Begich insists it isn’t. He says “oil and gas will be a part of the equation for a long time to come.”

“We have a choice,” Begich said. “We can produce oil and gas in our country, under our environmental regulations, which are much stronger, to protect the environment — emissions and other things. Or we deny the fact that these countries that we are buying from are really, I mean their environmental standards are awful. I don’t care if you’re Nigeria or China, wherever. They’re awful.”

On the subject of another hot-button Alaska race, Begich said he supports the unity ticket recently formed by Independent Bill Walker and Democrat Byron Mallott, who merged their campaigns in an effort to beat Republican incumbent Governor Sean Parnell. Begich said Parnell needs to be held accountable for his policies — especially the decision not to expand Medicaid under the Affordable Care Act.

“This is one where Walker, Mallott and Begich are unified: expand Medicaid,” Begich said. “We got the option, we can do this right away. Parnell, Sullivan, and Sullivan – that sounds like a law firm – they are not for expanding Medicaid.”

Begich said the unity ticket seemed to offer the best chance of beating Parnell and his running mate, who is also named Dan Sullivan.

KCAW: Did you have any role in the negotiations for the unity ticket?

Begich: I was happy to give my thoughts, I think it’s important, you know I know Byron personally, I know Walker personally…

KCAW: Were your thoughts supportive about the idea?

Begich: We had a good conversation.

The general election will take place on November 4.