On the issues: Begich vs. Sullivan in Sitka 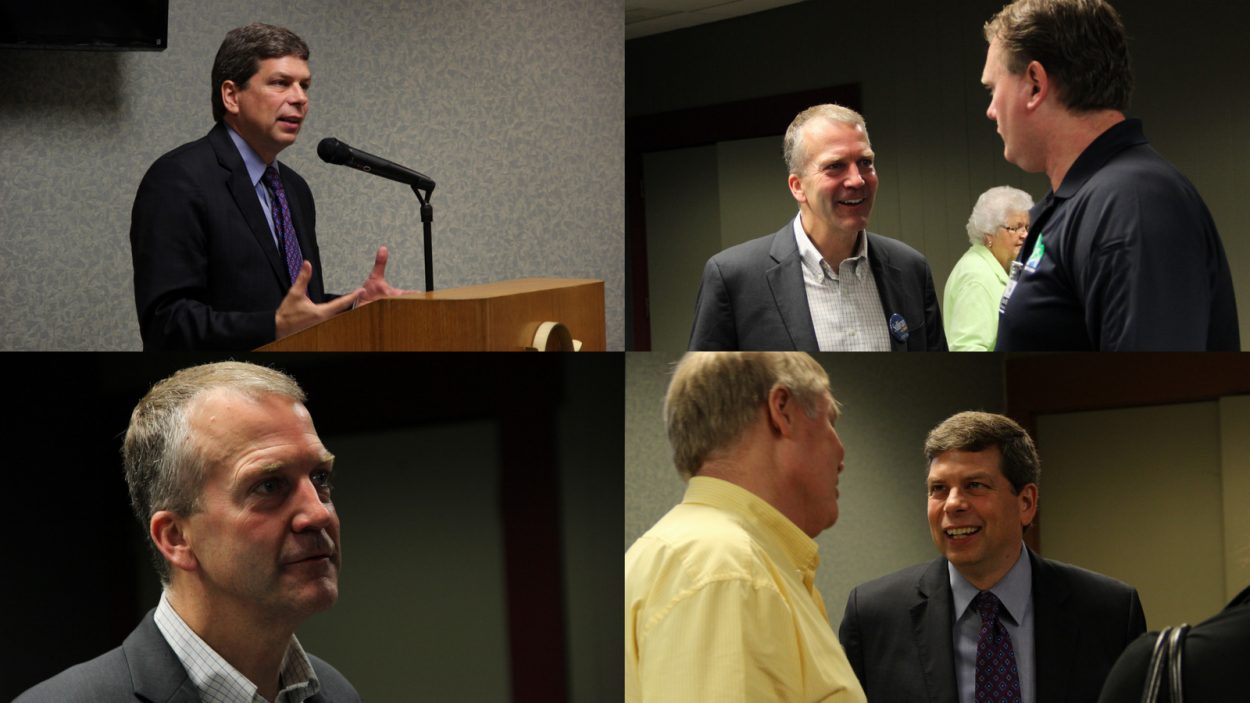 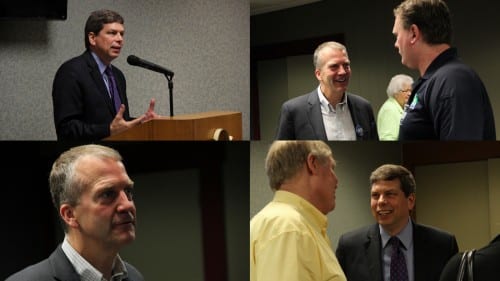 Sitkans were treated to two very different points of view on everything from health care to Iraq to climate change.

**This story expands on previous coverage, which you can find here.**

The stakes in this campaign are high — Alaska is one of a handful of states that could decide control of the U.S. Senate in November — and judging from their pass through Sitka, the two main contenders for Alaska’s Senate seat don’t agree on much.

Speaking to the Sitka Chamber of Commerce, Republican Dan Sullivan said his number one issue is reducing overly burdensome regulations. He called out the Affordable Care Act, also known as Obamacare, as a prime example.

“The bills get passed, nobody knows what’s in them, [and] they have all these provisions that say, ‘OK, agencies, now you go promulgate regs,” Sullivan said. “Avalanche of regulations. And guess who ends up having to deal with them, try to decipher them? It’s you guys. It’s the small American businessman and small American businesswoman.”

Senator Mark Begich, meanwhile, voted for the Affordable Care Act. In an interview, he assailed Governor Sean Parnell for refusing to expand Medicaid, a key part of the law. Begich said the failure to expand Medicaid has left too many low-income or seasonally employed Alaskans, including fishermen, without access to healthcare.

“Expand Medicaid,” Begich said. “We got the option, we can do this right away. Parnell, Sullivan, and Sullivan – kinda sounds like a law firm – they are not for expanding Medicaid.”

On the subject of national security, Sullivan criticized the Obama administration, arguing that it lacks a coherent strategy.

“I don’t know how we pulled it off in six years, but we have gotten to the point where our friends no longer trust us and our adversaries no longer fear us in the international world,” Sullivan said. “And we have been a country that’s been exhibiting weakness, and weakness in my view is provocative, and you’re seeing that all over.”

Sullivan has served as an officer and reservist in the U.S. Marine Corps since 1993, and worked in various foreign policy roles in the George W. Bush administration, including as an Assistant Secretary of State under Condoleezza Rice.

Asked how he thought the U.S. should handle the rapidly deteriorating situation in Iraq, he said there are no easy answers, but laid the blame for the current situation squarely on the Obama administration.

Sullivan: …right now we need engaged American leadership, which we don’t have.

KCAW: What would that look like in Iraq right now?

Sullivan:  Well, look…first of all you gotta remember where we were in Iraq when we left. Right? I spent some time in Iraq as a marine. We left at the end of the Bush administration with the surge where Iraq was a largely stable place that was on a very positive trajectory, mostly because of the work that we did closely with the Iraqis…

Begich, meanwhile, ruled out sending troops back to Iraq.

“One, we’ve gone through two wars already, our people are not going to go through another war,” Begich said. “The government is not stable, and the surrounding countries need to step up to the plate.”

Sullivan said he could think of situations that would call for American troops in Iraq. He brought up the events in Banghazi, Libya, in 2012, when the American ambassador was killed in an attack on a consulate.

“When Mark Begich says, ‘Absolutely, positively no boots on the ground no matter what,’ I’m not sure he’s thinking through all contingencies,” Sullivan said. “If you had a company of marines in Benghazi that night, we would have owned that town, and you wouldn’t have a dead ambassador and three dead Navy Seals.”

“I talk about climate change all the time, because I think, it’s kind of the generational issue,” he said. “When I was in Emmonak I couldn’t believe what I saw there, how quickly the area is eroding and the buildings they have to move, and Alakanuk, when I was there, it was unbelievable what was happening there.”

“I think the jury’s out on climate change,” Sullivan said.

Sullivan said he isn’t convinced that climate change is caused by human actions.

KCAW: So just to be clear, you don’t think there should be any, sort of, federal response to climate change?

Sullivan: [Pause] I think the federal response to climate change should not be what the Obama administration is doing, which is trying to kill energy and low-cost energy, and particularly coal.

Sullivan called himself an “all-of-the-above” energy advocate, including renewable sources like hydro power, but also oil, gas, and coal.

Begich said he’d like to see the country “diversify” its energy sources and invest in conservation and mitigation efforts to help communities adapt to climate change.

But Begich emphasized he does not support a slow-down in oil and gas exploration – which makes one point the two candidates agree on.

The general election will take place on November 4.