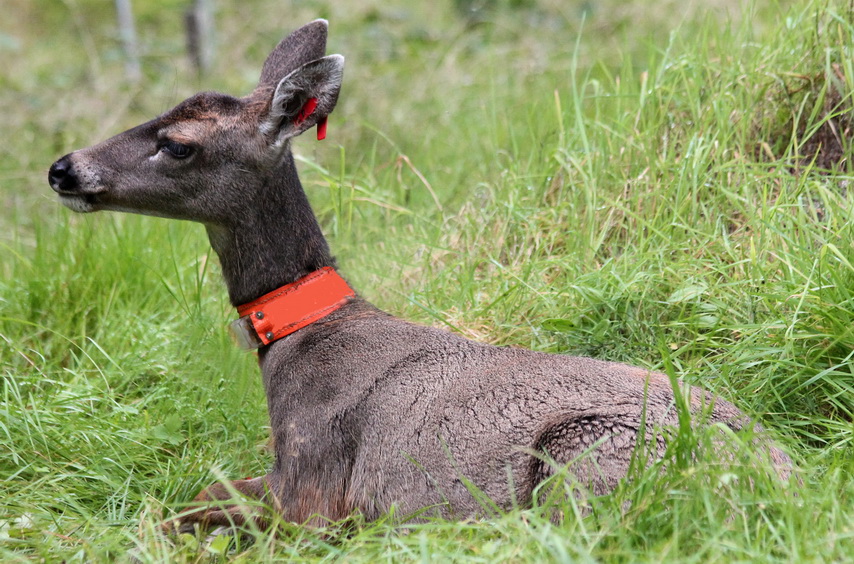 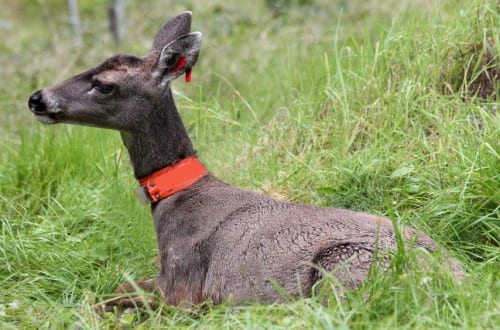 The doe suffered only minor injuries from the wire. The GPS collar will release on its own next summer. (ADF&G photo/Phil Mooney)

A deer found with a wire around its neck near Sitka has was safely released by wildlife authorities late last week. But another deer may be suffering from the same — possibly malicious — predicament.

Phil Mooney, a biologist with the Alaska Department of Fish & Game, successfully darted and tranquilized the adult doe near the Indian River Road on Friday (9-12-14).

With the help of Alaska Wildlife Troopers, Mooney removed a smooth wire loop from around the deer’s neck. He reports that the deer was not severely injured. He administered antibiotics as a routine part of the tranquilizing procedure.

The deer was seen often around the Indian River neighborhood, Geodetic Way, and the Hames Center. Mooney says the high number of reports from concerned citizens was essential in helping him and the troopers to locate the deer.

Once he confirmed that the doe’s injuries were minor, Mooney fitted it with a bright orange GPS collar and an ear tag. He says he’ll include the animal in a study with several others he has collared in the Starrigavan area as part of a local habitat study. The collar will automatically release next summer. After he recovers the collar, Mooney will be able to download Global Positioning System data, and map the deer’s movements.

Meanwhile, troopers are investigating the source of the wire. Mooney says it’s unclear whether the deer was accidentally or deliberately ensnared. A possible second deer with a wire around its neck was reported on Saturday. Mooney says that if a second deer with a wire is confirmed, it would be “an unhappy turn of events.” Troopers are now trying to locate that animal.