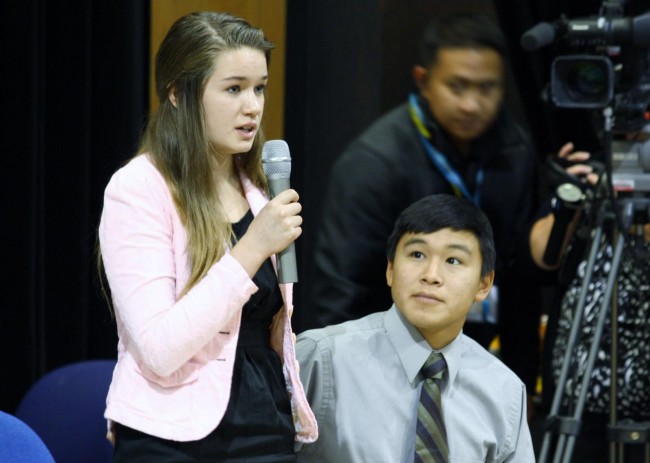 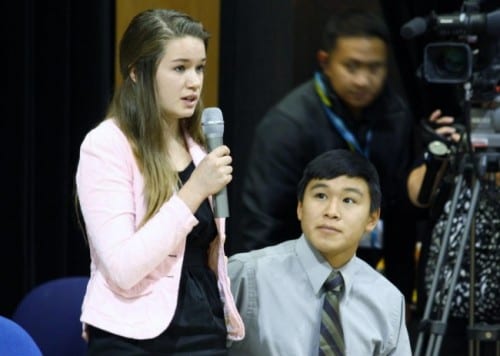 Nelson Kanuk, seated, and Katherine Dolma, standing, were two of the six young plaintiffs who sued the State of Alaska, demanding it take action on climate change. The pair are pictured here in Barrow, following a Supreme Court LIVE hearing at Barrow High School.  (Photo by Jeff Seifert/ KBRW)

The Alaska Supreme Court on Friday (9-12-14) dismissed a case brought by six young Alaskans, demanding the state take action on climate change. The suit was one of several filed nationwide, and the first to take its argument to a state supreme court. In dismissing the case, the Court said that climate policy isn’t an issue the judiciary can decide — it must go through the political process.

But for the young plaintiffs and the nonprofit supporting them, the ruling included some silver linings. 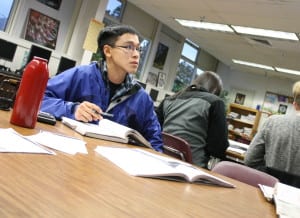 Nelson Kanuk as a senior at Mt. Edgecumbe High School in Sitka, in December 2012. Kanuk sued the state with five other Alaskan youth, asking it to pay more attention to climate change. (Photo by Ed Ronco/KCAW)

Nelson Kanuk was 16 when he sued the state of Alaska along with five other minors, ranging from infants to teenagers. The six young Alaskans argued that the state has an obligation to do more to halt climate change.

Each of the children named in the suit cited direct impacts from climate change, but Kanuk’s were maybe the most immediate. The river in front of his family’s home in the Western Alaska village of Kipnuk was carving away the melting permafrost beneath their land.

This is Kanuk speaking with KCAW’s Ed Ronco in early 2013, after a year in which his family lost eight feet of their yard to the river:

Kanuk: … as the summer progressed, we lost another five feet…

Ronco: How much is left before it gets to your house?

Kanuk: Last fall, before I left, there was about 40 feet, or so, but when springtime comes, there’s definitely going to be a couple more feet that will be lost.

Now, Kanuk is 20, and a sophomore at the University of Alaska, Fairbanks. And his family’s house? It’s uninhabitable. In the last year, his family moved first to Bethel, and then to Kenai, driven both by the loss of their home and the escalating cost of food and fuel in Kipnuk.

Kanuk says it’s been a huge change, especially for a family that’s used to getting much of its food from the land.

“We aren’t able to just hop on a boat and go out and catch our dinner that night,” he says. “You know, our subsistence lifestyle changed. Now we’re forced to go to Fred Meyer or Walmart. It’s a big change.”

It was to draw attention to the situation of families like his that Kanuk first joined the suit against the State of Alaska in 2011. The plaintiffs are backed by Our Children’s Trust, an Oregon-based nonprofit that has worked with kids in several states and at the federal level to bring similar lawsuits. The Alaska case is the first to reach a state Supreme Court on its merits.

You can watch the full oral arguments before the Alaska Supreme Court here, from Gavel Alaska:

And this month, the justices dismissed the suit. But Julia Olson, Executive Director of Our Children’s Trust, says the court “left the door open” on several key issues.

“The exciting part about the Supreme Court’s decision, is that they said the youth had made a good case,” Olson says. “They noted that the climate science is compelling, it demonstrates real significant impacts to the people of Alaska, and that the plaintiffs had direct injuries…So it did all sorts of really important things. The one thing it didn’t reach was, well, what role does the court have to play?”

Assistant Attorney General Seth Beausang argued the case for the State of Alaska. He saw the ruling in more limited terms.

“The appeal was about where the plaintiffs’ concerns about global warming should be heard,” Beausang said. “Whether it should be heard in court or in the political arena. And the court held that the claims were not the kind of claims that can be resolved in court.”

Claims such as: the state should reduce emissions by at least six-percent a year. That kind of specific policy, the court ruled, should be left to the political process.

But the plaintiffs also asked the court to rule on whether the atmosphere is part of the “public trust.” This is a concept embedded in the Alaska Constitution.  Things like water, wildlife, and fish, are all publicly owned, with the state holding them in “trust” for the benefit of all Alaskans.

Beausang says the plaintiffs suggested a whole new take on the idea of the public trust.

“It was trying to argue that under the doctrine, the state has an affirmative duty to protect public trust resources from harm,” Beausang said. “That is a novel spin on the public trust doctrine.”

The court tip-toed right up to the edge of declaring the atmosphere an asset of the public trust, writing, “the plaintiffs do make a good case.” But, in the end, the court said that a ruling wouldn’t give the state clear direction on what to do next, and wouldn’t give the plaintiffs immediate relief. So while it could issue a ruling, it wouldn’t — not in this particular case.

Olson says the plaintiffs will ask the court to reconsider that decision — specifically, she thinks the court can do something right now, on greenhouse gas emissions.

“Even if it’s the court directing the other branches of government to do the work to set a safe level or a safe standard,” Olson said. “It doesn’t have to be the court that does it, but somebody needs to do it, because no entity within government is doing that right now, and that’s a tragedy.”

As for Kanuk, he says he’ll keep working to bring attention to the issue of climate change in Alaska. For his part, he doesn’t have any choice but to adapt.

“To me, it’s kind of like, [laughs] jumping into a fast-flowing river,” Kanuk said. “You don’t know what’s going to happen, and it’s tough, but you have to adapt to the new way of life that we’re forced to live now.”