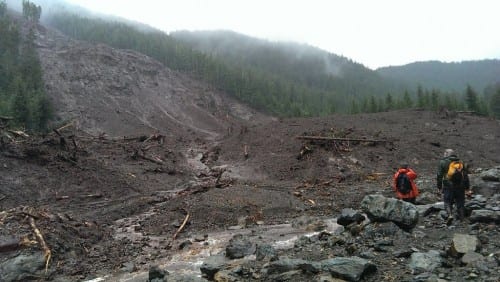 High rainfall this month is being blamed for a major landslide near Sitka. The US Forest Service reports that a 100-acre slide came down in the Starrigavan Valley, about ten miles from town. Although there was no structural damage in the event, hundreds of thousands of dollars of watershed restoration projects in the valley have been wiped out. The slide, and water damage to an ATV trail in the valley and other hiking trails elsewhere in Sitka — all add up to a tough month for the agency.

The scale of the Starrigavan slide has unfolded slowly. A Fish & Game biologist was in the area — apparently the morning after the slide — on Friday, September 19, and noticed that Starrigavan Creek had been diverted onto the old logging road that is now being used as an all-terrain vehicle trail.

Marty Becker is the watershed program coordinator for the Sitka Ranger District. He and other staff went to check on the problem Monday morning.

“It wasn’t until we actually climbed through the front of the slide that we saw the magnitude of it.”

Read the USFS Preliminary report on the Starrigavan Landslide here. 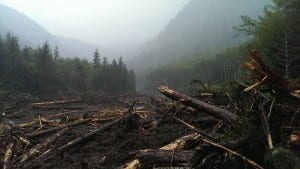 There was not one slide, but three. Two smaller slides across the both the north and south forks of Starrigavan Creek…

“And then one main slide that came down off the north-facing slope. Came down and ran about a third of a mile down the main channel, and ended up at the log stringer bridge, which hung up the main slide.”

Becker estimates the area of main slide to be in the neighborhood of 100 acres, starting in the old growth timber high on the valley slope and running down through the second growth to the valley floor.

Becker says the Sitka district hasn’t seen a cluster of slides like this since the mid-1990s, in Nakwasina Sound and the Katlian area, which he says are more dynamic systems. The Starrigavan slide, Becker says, is “pretty extraordinary.”

On the Herring Cove Trail

“Boy those freaky events keep us on our toes…”

The log stringer bridge in the Starrigavan Valley is a lost cause. At the other end of town, USFS recreation manager Mike Mullin is on the Herring Cove Trail, next to a footbridge that his crew is working hard to save.

“These guys will get a gap opened up under it and get a lot of that material flushed through, and we might end up jacking the bridge by a couple of feet. I’m hoping once we uncover the rocks and debris that there’s not some big chunks out of it. So I’m hoping it can be saved.” 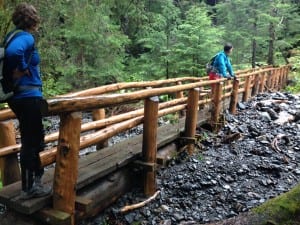 Hikers on the Herring Cove Trail footbridge. Flood waters pushed rocks under most of the span, turning it into a dam. (KCAW photo/Robert Woolsey)

This is the second time this year that the trail has sustained major water damage. All the repairs from last January’s flooding have been washed out, two minor slides have cut the trail, and this footbridge over the stream — while it hasn’t moved — is more or less sitting on dry land. Heavy rains over two consecutive weekends in September pushed rocks under the bridge and turned it into a dam.

It doesn’t look like it will survive another high rainfall event. Mullin says the Forest Service is basically between a rock and a hard place.

“The couple of events we’ve had this summer have been a little out of the ordinary for sure, but yeah, we’re not even in the rainy season, and we lose our seasonal crew in a couple of weeks. And obviously Forest Service budgets for maintaining trails are on the decline. So we’ve got a lot of things working against us.”

Mullin says the agency will likely have to consider realigning the trail away from the alluvial fan at the base of Bear Mountain Falls, into a less dynamic area.

Both the Herring Cove trail and the Starrigavan Valley were probably affected by what Marty Becker calls a “micro-burst.” Meteorological data for Sitka doesn’t indicate rainfall amounts too extraordinary for this time of year, but the rain came hard and fast. What was officially recorded as three-and-a-half inches of rain at the Sitka airport on the day the Herring Cove Trail was damaged, Becker says filled rain gauges in some parts of town to nearly seven inches.

In the Starrigavan Valley, the mitigation strategy is uncertain. Three of the Forest Service’s coho-rearing ponds were lost in the slide; a fourth was almost completely filled with sediment. Two fish culverts have been blown out, and a half-mile of stream, several forest test plots, and 300 meters of the ATV trail are just gone.
The Forest Service has invested several hundred thousand dollars in restoration work in this valley. Becker is not sure to what extent the agency will attempt to undo some of the damage.

“Yeah, that’s the big question. We’re going to be sitting down the next couple of days assessing what we know right now. Getting some aerial reconnaissance to see if there are more slides that we haven’t seen, and then getting out there in the next week or so after we let things stabilize — it’s pretty dangerous, things still shifting around — to get a full inventory of what’s been damaged, where the main problem areas are, and then to see what we can actually do.”

The last slide of this magnitude around Sitka happened at Redoubt Lake in May of 2013, and two people staying at the Forest Service cabin there managed to escape moments before the mountainside came down. Becker says both slides are comparable in size, but he says the resource damage here is greater, because the Redoubt slide was stopped by the lake, and in Starrigavan it just “ran right down the valley.”