Orion Hughes-Knowles is one of two candidates running for mayor in Sitka. The municipal election is Tuesday, October 7. 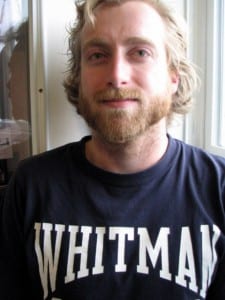 On October 7th, the citizens of Sitka will have the opportunity to exercise their democratic rights by selecting a new mayor. There are two choices on the ballot this year; the incumbent Mayor Mim McConnell, and myself, Orion Hughes-Knowles. I am extremely excited to be involved in this election, especially against such a worthy opponent. Mim McConnell has years of experience and is well entrenched amongst various organizations within and outside of Sitka. I, on the other hand, am a political newcomer, and aside from a brief stint serving as a senator of the Whitman College student body, am relatively unfamiliar with the details involved in high powered politics – I have not hobnobbed with any cruise ship captains, I can tell you that.

Since graduating from Whitman College in 2010 with a degree in Sociology, I have worked locally in the social services, in construction, and in food service. Living and working in Sitka, I have encountered many of my peers who, like me, are graduates of Sitka High School and have decided to stay in Sitka, but who feel disconnected from the political process. By running for Mayor, I seek to represent a younger generation who feel disenfranchised and who are now in the unfortunate position of paying for the much needed repair and reconstruction of vital public infrastructure.

Sitka has invested heavily in large scale public improvements, and while great work has been accomplished, we need to refocus our efforts on maintaining and repairing our public infrastructure. We need to accept that services provided by the city must be paid for, and to continue to rely on outside funds from the State and Federal governments will be a costly mistake.

I believe in the voters of Sitka. I believe that one of the last pure forms of democratic expression lies within small towns where neighbors, co-workers, friends and family members all have an opportunity to express their political vision in a real and tangible way. A democracy thrives when it allows its citizens to easily and effectively engage their public officials in a meaningful discussion. Political apathy is a sign of democratic decay – when the status quo is no longer challenged, democracy is in crisis.

There are those in this town who are satisfied with the status quo, who aren’t living paycheck to paycheck, who aren’t worried about paying their bills, who are disconnected from the financial realities of a small isolated Alaskan town. The “pay it later” mentality which has reigned in Sitka needs to come to an end; it is not, and has never been financially prudent, and now our financial priorities need to be re-evaluated.

I want a Sitka I can be proud of, no matter what time of year it is.