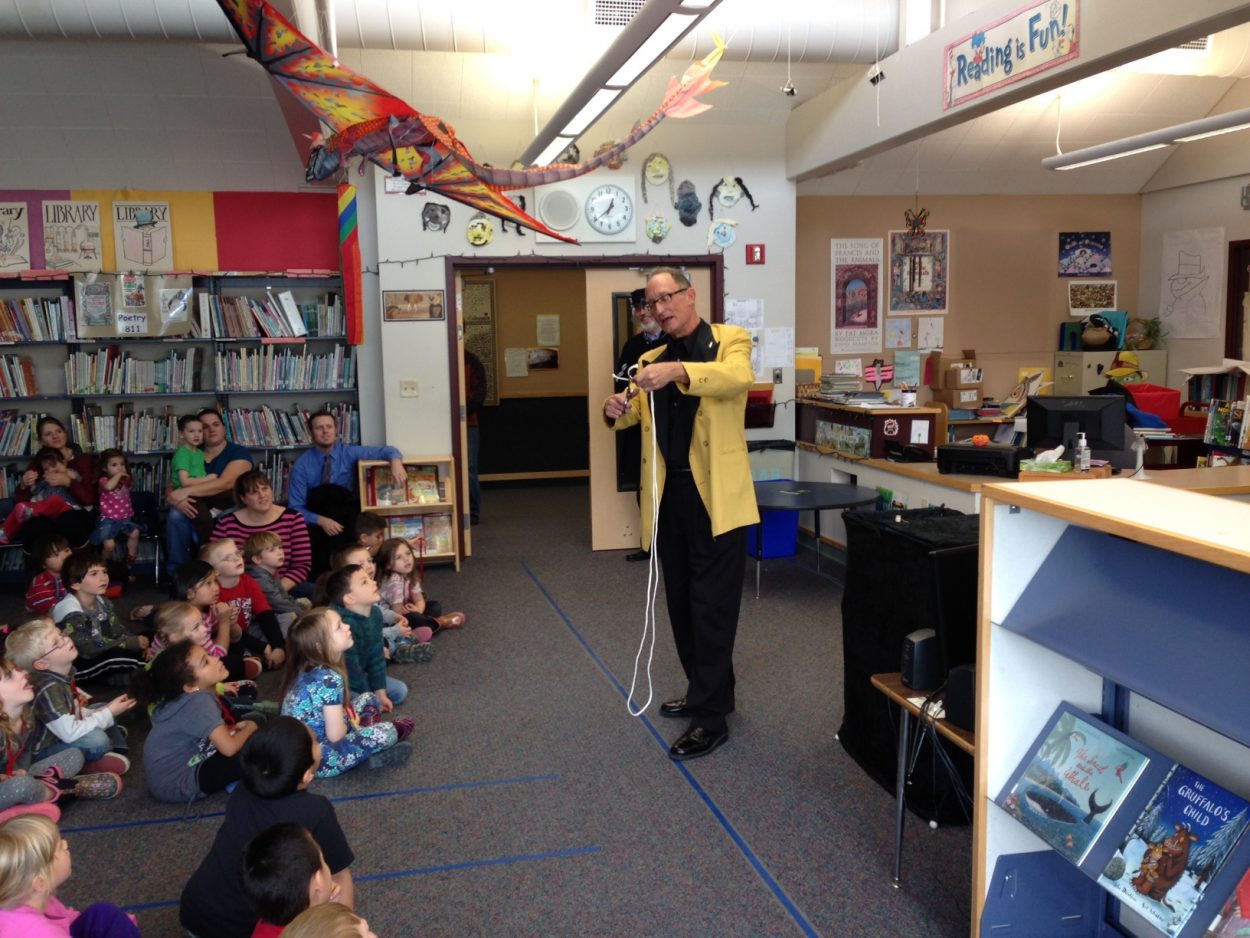 Odette asked the Baranof students, “What’s the magic word?” “Abracadabra?” they reply. “I thought it was Please!” (KCAW photo/Robert Woolsey)

Sitka’ Alaska Day festival is about a lot more than a parade. This year, in addition to the bagpipers, military bands, and other traditional performances, the Alaska Day Committee invited a magic act — a 19th century magic act.

David Odette is a barnstorming magician participating in a one-man revival of historic magic. KCAW’s Robert Woolsey followed him to Baranof Elementary School to see how well very old illusions hold up with a very young audience — and sent this audio postcard.

19th Century Magician David Odette will perform Thursday, October 16, in the Sitka Historical Museum at 6 PM. He’s appearing courtesy of the Alaska Day Committee. There is no charge for the show.

This is as close as I’ve ever come to witnessing a riot in Sitka. A man in a faded gold tuxedo coat is standing among 50 kindergarteners in the school library, running through literally some of the oldest tricks in the book: the magic dots, cutting a rope and putting it back together, and now stuffing a white handkerchief into his fist, and pulling out a blue one, then a red one, then a yellow.

You want a rainbow?

But these kids are on to him. They want him to turn the handkerchiefs into a rainbow. This is their idea — not his. And now they’re starting to chant.

So Odette takes the handkerchiefs and stuffs them into a little magic bag. I’m pretty sure this trick is going to end with a green handkerchief, or maybe the red, yellow, and blue handkerchiefs tied together.

But he invites a little girl to step forward and reach into the bag. She pulls out a ten-foot long rainbow.

Odette – My name is David Odette. I’m from Ionia, Michigan. I’m a performer and collector of magic.
KCAW – I thought when you pulled the rainbow out of your bag, the kids were going to riot.
Odette – It was their idea. I didn’t plan on doing the rainbow today. But they wanted to see a rainbow, so I made a rainbow.
KCAW – My impression of magic is very Las Vegas oriented. It’s amazing to see the power these simple illusions have over — not just the kids, but the adults in the room.
Odette – These are classic pieces of magic that have been performed for 150 years, and they’re still amazing, but people do not often get to see a real magician without the smoke and the mirrors, or the makeup and weird stuff. Just a regular magician who comes to town and does amazing things.

Odette grew up, he says, on the West Coast — the west coast of Michigan. His town library had only two books on magic. One on performance, and the other on history. His act was born in that library.

KCAW – Is this where you want to be? This kind of barnstorming performer? Or do you have your sights set on recreating a bigger historic show?
Odette – You saw the audience today. You heard them. They loved to see magic. To me, that is magic in itself. That’s my return. Being able to pass on the art of illusion. I’m stuck on this and happily stuck.

David Odette is a barnstorming performer of historical magic. As the kindergarteners filed back to class, one of the teachers realized she had picked up the wrong jacket — a child’s jacket instead of her own. “Can you make this fit me?” she asked Odette. He replied, “I do magic, not miracles. And I don’t do laundry!”