Magic or therapy? Tarot a guide to the possible 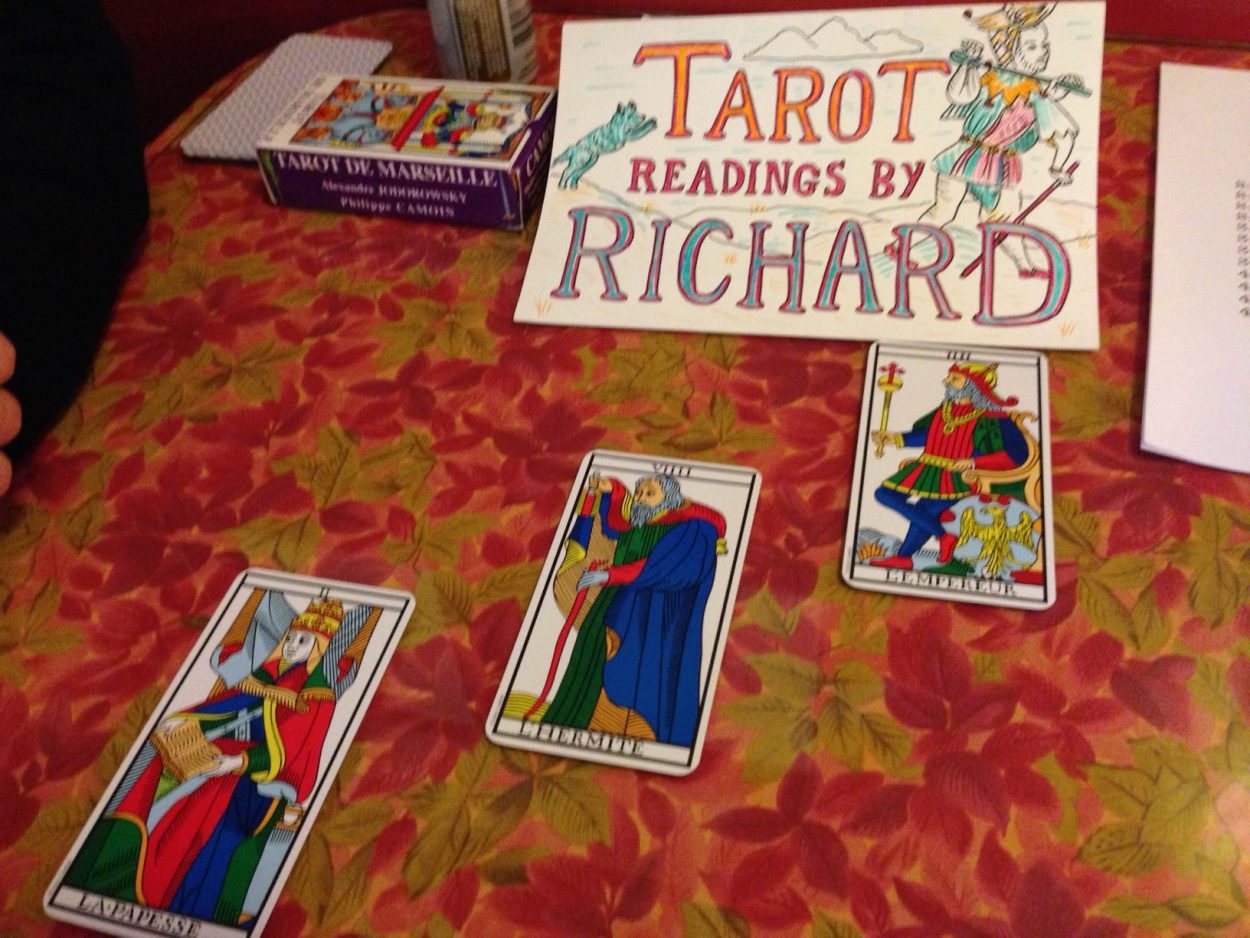 It’s a pastime so old that people are more familiar with the parody than the real thing: a crystal ball, a deck of ornate cards, the lines in the palm of your hand.

Earlier this year Sitka had a tarot card reader in residence — he read over seventy people’s cards in a downtown coffee shop. The Tarot, it turns out, is mystical — but not magic. Like professional therapy, it’s really about looking into a mirror, as KCAW’s resident tarot skeptic, Robert Woolsey, discovered. 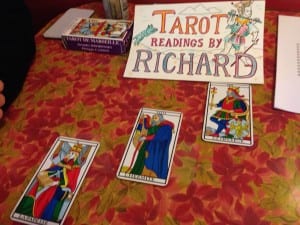 Aufrichtig says it almost doesn’t matter what cards are drawn — they all speak to some aspect of our lives. (KCAW photo/Robert Woolsey)

In the Backdoor Cafe…

My first problem with having a tarot reading is telling you about it. The Tarot is incredibly personal.

Everything you’ve said is kind of uncanny. I don’t think I can use this in a news story!

I assumed that a tarot reading would involve a certain amount of mumbo-jumbo — “you will meet a tall, dark stranger” kind of stuff. Richard Aufrichtig, who’s doing my reading, says people often have that misconception, and sometimes are a little disappointed at first to learn that a tall, dark stranger is not in the cards.

It’s something else entirely.

“I think that the world we live in is very much in need of healing and transformation, and the tarot is a very approachable tool to move people into a conscious space where they’re thinking in that way.”

Aufrichtig is from Brooklyn. He’s been studying the Tarot for about three years. He was in Sitka for a residency in music and poetry, and offered tarot readings on the side for fun. It really caught on: Over the course of the summer in Sitka, he did readings for around seventy-people in this downtown coffee shop. A skilled reader sizes up his client, and lays out some compelling options. I’m a single parent with college-age children; Aufrichtig doesn’t know this. All he sees is a guy with a microphone, and turns over three cards: The High Priestess, the Hermit, and the Emperor.

“I would say right now what I’m seeing in your life is that you’re in this space, this phase, where you’re trying to follow the light of your wisdom, and you’re being grounded by this aspect deep within yourself that’s like, Let me be receptive to this, to what my wisdom is right now… And you’re really being guided by the idea of taking the reins of your own kingdom.”

Who doesn’t want to hear this? What I most look forward to is taking the reins of my bank account, when my kids graduate. But I’m definitely feeling buoyed that the cards suggest I’m emerging from a challenging period.

Yet really the cards don’t suggest anything. I’m hearing what I want to hear, and there is enormous power in that.

“So many people in my life go to regular counseling, and it does wonders for them. And I think tarot works the same way: It’s an ongoing treatment plan for people,” says Sophie Nethercut.

Nethercut recently moved to Sitka. She fell into the study of the Tarot by accident, after being stranded in New Orleans. She has researched the Tarot extensively in Brazil, South Africa, and Vietnam. She didn’t study the cards, though. She studied the readers.

My tarot reading was 15 minutes, and used only three cards. Some last for over an hour, and clients ask pointed questions about important decisions in their lives.

“I remember one reader in South Africa — and I’ll remember this interview for the rest of my life — she said, Look, people come to me, they ask should I have a baby? Should I get divorced? Will my mom who’s had cancer for 10 years ever recover? And people come with incredibly challenging and deep personal questions, and for many this reader is the answer.”

Nethercut says tarot readers always work the same way, pointing toward possibilities, but not calling the shots. Asking clients to look inward, helping them understand things they might already know.

“If you ask, Will my mom recover from cancer? there’s only one answer you want to hear.”

Back in the cafe in Sitka, Aufrichtig discloses what the skeptic in me has known all along: We all experience dark times; the benefit of tarot is as an exercise in positive thinking.

“I think I continue to study tarot because it’s the University of Yes.”

Aufrichtig also believes it’s important to act on the information you discover in a tarot reading, or the whole thing is reduced a feel-good parlor trick. But it’s one thing to hold up a mirror, and another to act on what you see there.

Robert – This is a lot better than You will meet a tall, dark stranger.
Richard – I tend to think so (laughs)…

I will give it a shot, though, since the answer is in the cards.