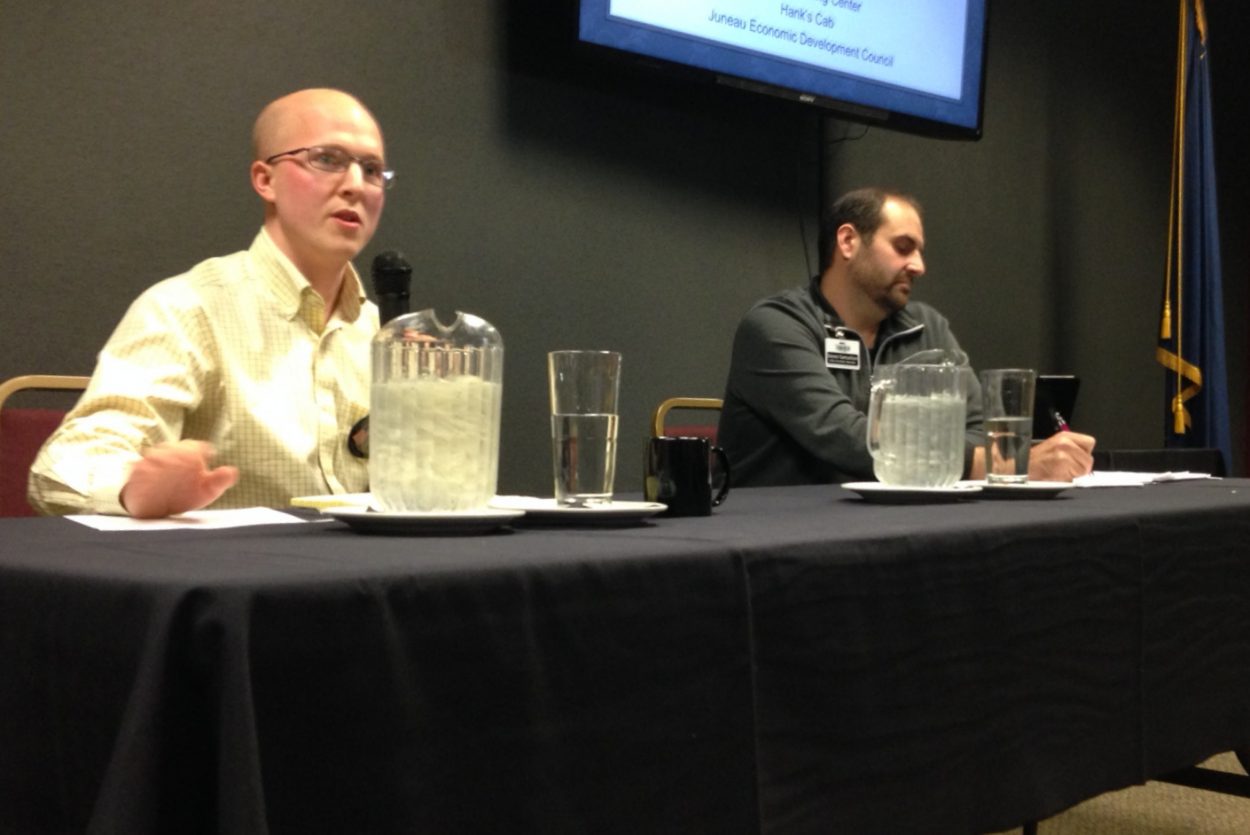 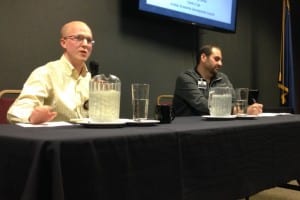 The two candidates for House District 35 met in Sitka for a sometimes testy exchange before the Chamber of Commerce.

House District 35 includes Sitka and Petersburg, villages from Hoonah to Kake, and much of Prince of Wales Island.

You can find the full audio from the Sitka Chamber of Commerce Candidate Forum here.

The forum gave each candidate a chance to lay out his pitch to voters. For Kreiss-Tomkins, that’s the engaged policy wonk, who comes armed with a blizzard of specific proposals, and will work relentlessly — and work with anyone. He described efforts to establish a Great Teacher fund, an idea spearheaded by Anchorage Mayor Dan Sullivan and other Republicans.

“Cheryl Frasca, who we’re working on with this education idea for instance, is chairing one of the Sean Parnell / Dan Sullivan super PACs,” he said. “I mean, she is like, Mrs. Republican! And I love working with her, because she’s got a good idea, and that’s what I’d like to think the political system should be about.”

But Samuelson said, essentially: none of that matters if you’re in the minority. Republicans dominate the state House, and that looks unlikely to change in this election. So Samuelson argued that what District 35 voters need is a Republican.

He pointed to Sitka’s Blue Lake hydro project; the city is asking the state to reimburse some of its construction costs.

That would be State Senator Bert Stedman, another Republican.

Samuelson also argued that he’s spent more time in the industries that make Southeast tick. He was a deckhand and then skipper of his family’s fishing boat until 2006.

“When you’re looking at somebody to elect, you’re gonna want to look at somebody that’s  been in the industry for all of his life, and that’s me,” he said.

I’ve been in the industry all my life: that was a refrain Samuelson repeated throughout the forum, and eventually it prompted a response from Kreiss-Tomkins.

“I’m 25 years old,” Kreiss-Tomkins said. “That’s a fact. And so, I’m young, and that’s also a fact. That’s something that came up in the last campaign as well.”

Kreiss-Tomkins was 23 when he defeated four-term Republican Bill Thomas in his first campaign. He won that race by 32 votes.

“I may be 25 years old, but I aggressively seek out advice from those who will always know better than I do,” Kreiss-Tomkins said. “And that’s a fact that I think really should be universal no matter how old you are, or what position you hold.”

Samuelson reminded the audience that he is only 37 years old himself.

“So, I don’t find myself to be old,” he said to laughter.

The candidates were asked for specific ideas to ensure the future of fishing in Alaska. Kreiss-Tomkins said one of his top priorities is to bring fishing permits back to the state. Many are now held in Washington and Oregon.

“Twenty years ago, a community like Hydaburg had over a dozen seiners,” he said. “Right now, Hydaburg has two, depending on how you count, three seiners. Angoon has no limited entry commercial fishing permits left in that community, besides a few hand-troll permits. No more power trollers, no more gill netters, no more seiners.”

Kreiss-Tomkins said he’s interested in a model that would let communities work collectively to reacquire permits.

“There’s a model called community fishing associations that’s brand new,” he said. “It’s been pioneered in Cape Code, that’s really the only example of it in the nation, that we’re looking at trying to adapt to Alaska. That’s an idea I’m really excited about, I think it has huge potential for Alaska.”

Samuelson disagreed with that approach.

“Those permits didn’t just disappear one day,” he said. “People made decisions on whether to sell them, whether to trade them, whatever the reason may be, and some people just retired and sold them.”

Samuelson mentioned that when his own father retired, he could have bought the boat — but couldn’t afford to. That’s the big issue for fishing communities, he said.

“How do you pass down these operations to your kids? How do you get into the fishery? And what are we going to do to make that happen? So that we can keep local Alaskans working and keep our economies vibrant?” he said. “Those are things that are important. Now, I can’t tell you all the specifics of exactly how I’d go about it. But I can’t tell you enough, that I have been in these industries all my life.”

One audience member asked whether the candidates support expanding Medicaid, the health insurance program for low-income Americans. Under the Affordable Care Act, states can expand the program, and the federal government will cover most of the cost. Governor Sean Parnell has declined the expansion, citing its price tag.

Samuelson said he’s not sure where he stands on the expansion.

“I’m a person that thinks that healthcare absolutely needs to be looked at. I think that most of us can agree on that,” he said. “But we also have to look at the financial sides of things, too. Medicaid expansion is something that I need to look more into. It’s something that I absolutely have a grasp of, but I’m going to go ahead and step away from that one.”

“I support it for two reasons. The first is effectively a moral reason. You’ve got low income, the working poor, the working middle class, lower middle class in Alaska right now that has no access to healthcare.”

Kreiss-Tomkins argued that the expansion would also bring money into Alaska in the form of federal spending on healthcare, calling it a “slam dunk economic issue.”

Summing up their campaigns at the end of the forum, Kreiss-Tomkins said that he believes in a “high-energy approach to public service.”

Samuelson said, “Why me? It’s the resume.”

The general election is Tuesday, November 4.