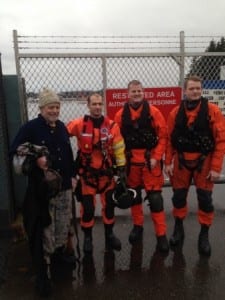 A Coast Guard helicopter rescued a hunter stranded south of Sitka on Wednesday morning (11-19-14), after his boat sank.

Sixty-nine-year-old John DeLong was found on Baranof Island near Carmel Mountain, about 12 miles south of Sitka. DeLong was on a three day hunting trip on a muskeg above Picnic Cove and had planned to stay at his son’s boathouse.

According to DeLong, after shooting a buck he got disoriented and was unable to find his boat. He spent the night under a cedar tree. The next morning, he awoke shaking and with hypothermic symptoms. DeLong went into an area with cell reception and called his wife, who reported his status to the Sitka Police Department just before 7 AM Wednesday (11-19-14).

The Coast Guard Command Center in Juneau took control of the case and dispatched a helicopter crew from Air Station Sitka at 7AM.

DeLong was rescued within the hour. The helicopter crew lowered a basket, allowing him to climb inside. His boat was later spotted, submerged in the water near Goddard Hot Springs.

Coast Guard Petter Officer Shawn Eggert said DeLong was checked by medical personnel, and was not injured or hypothermic.