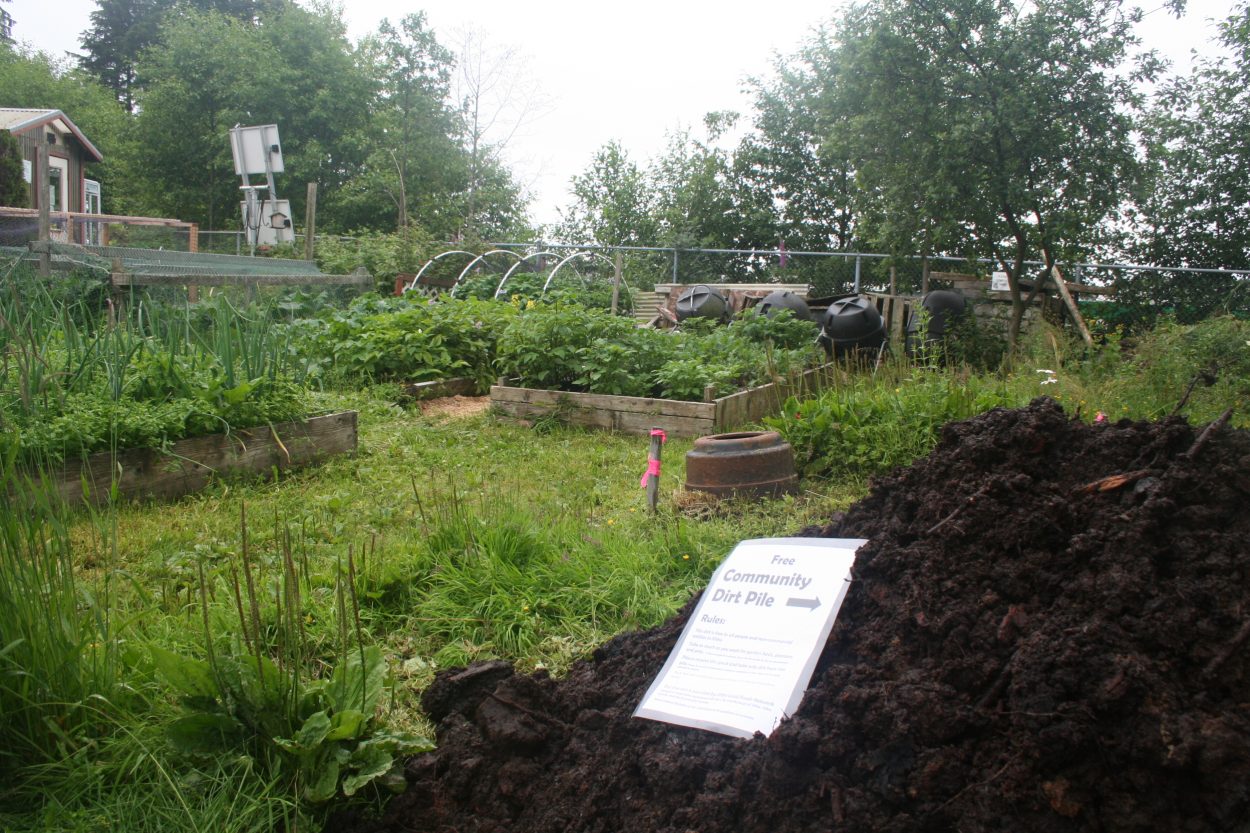 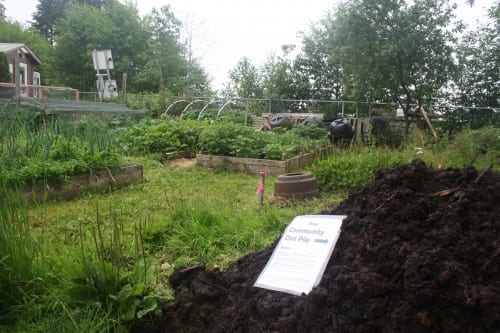 Soil for the taking at Blatchley Community Garden. An ordinance approved by the Sitka Assembly would make it easier for home gardeners to sell their excess produce. (KCAW photo/Greta Mart)

The Sitka Assembly voted Tuesday night (11-25-14) to make it easier for residents to sell produce they’ve grown at home.

The change is part of an effort to make locally grown food more easily accessible.

Most food arrives in Sitka on a barge. There’s not much room for crops in a town squeezed between the mountains and the sea, so while your fish might be local, and your deer, the contents of your vegetable drawer probably are not.

But some Sitkans are trying to change that. They’d like to see more backyard real estate devoted to rhubarb and chard, lettuce and leeks. And if a family grows more than they need, well, why not make it easy for them to sell it?

That’s the idea behind Ordinance 2014-38. It would streamline the permitting process for residents who want to, say, set up a stand in their front yard to sell the extra fruit and vegetables from their garden.

“This is an example of something that we can do very specifically to improve our food system here in Sitka,” said Lisa Sadleir-Hart, president of the Sitka Local Foods Network. “It’ll increase economic opportunities for Sitkans who garden or are in small farm production…it’ll keep produce dollars circulating locally…it increases neighborhood access to fresh fruits and vegetables…[and] it may spur other Sitkans to consider growing for more than their families and lead to further increases in our food security.”

Sadleir-Hart and her husband, Tom Hart, proposed the changes to Sitka’s planning commission this summer. The couple have a large garden and greenhouse, and want set up a garden stand.

Under the ordinance, residents who want to grow food to sell could apply for a permit from the planning commission, instead of having to go before the full assembly, as currently required.

The ordinance would allow garden stands in residential areas, but they’d be limited to six by eight feet. And to blunt the impact on neighbors, stands would only operate four hours a day, two days a week, between May and October. The ordinance specifically doesn’t include livestock or animal products.

Michelle Putz is vice-president of the Sitka Local Foods Network. She laid out the arguments for eating local.

Assembly member Steven Eisenbeisz asked whether people running a home garden stand would need a business licence, and whether the city would collect sales tax. Mayor Mim McConnell said the answer is yes on both counts.

Sadleir-Hart said that was a major motivation behind the proposal.

“Part of the reason for doing this locally is it keeps more money in our community,” she said. “And this is one example, of raising some sales tax for our community.”

The ordinance passed 7-0 on first reading. It will come before the assembly at least one more time for final approval.

The assembly also approved several revisions to the Sitka General Code on Tuesday night. The updates are part of an effort to get rid of outdated sections and bring the code into compliance with state law.

Revised sections cover parks and playgrounds, and the civil defense council, which no longer exists. Proposed revisions to the section governing elections were sent back to city staff for edits.

You can find more coverage of the Sitka Assembly here.