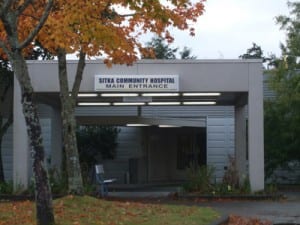 The city-owned Sitka Community Hospital is in worse financial shape than anyone thought — including its new CEO.

The Sitka Assembly was briefed on the hospital’s finances during a closed-door session last night (Tuesday 12-10-14), and the hospital’s chief financial officer has resigned.

But so far, very little information has been released to the public.

About ninety minutes into its Tuesday night meeting, the Sitka Assembly withdrew for a rare executive session to discuss the hospital’s finances.

Executive sessions aren’t open to the public, and are only allowed in specific circumstances. In this case, the motion said that public knowledge of the topics being discussed could have “adverse legal and financial consequences” for the city.

So assembly members trooped down the hall for a closed-door meeting with hospital CEO Jeff Comer, board president Celeste Tydingco, and board member Hans von Rekowski.

An hour and forty minutes later, the assembly emerged, and Mayor Mim McConnell offered the body’s only public comment on the situation.

“The assembly met to receive a report on the fiscal situation at Sitka Community Hospital,” she read from a prepared statement. “There has been a perfect storm of financial events that have led to a difficult situation. We have an excellent team in place, committed to exploring all possible solutions, which include both short- and long-term plans. The assembly will be updated on a regular basis over the coming weeks.”

And that was it: all the assembly was able — or willing — to say on the subject.

Though Sitka Community Hospital is largely autonomous, its board answers to the assembly, and its budget is part of the larger city budget.

Speaking with reporters after the meeting, hospital CEO Jeff Comer said he hopes to release more information soon. Comer was hired in September.

“I’ve been, as you all know, on the job for about three months now, and I’ve been looking into our financial situation,” he said. “We’ve got multiple issues that I’ve uncovered, and I’m still evaluating. So as soon as I have a better feel for those, and the depth of them, and the impact, then I’ll have more information to release.”

Speaking with KCAW and the Sitka Sentinel, Comer said he’s “just getting his arms around” the problem.

Sentinel: Can you tell us, are you able to make payroll?

Sentinel: Are you going to be asking the assembly for money?

Comer: I do not know yet. It’s too early to tell, I’m still evaluating it.

KCAW: Did this come as a surprise?

Comer: Yeah, um. [Pause] When I was in the interview process, I don’t think anybody fully understood some of the underlying issues, and I know I did not. So, yes, to answer your question, it was a surprise…

The hospital’s director of fiscal services, Lee Bennett, resigned on December 3. But Comer said he couldn’t discuss Bennett’s resignation, or even whether it’s related to the hospital’s financial situation.

KCAW: Did he resign, or was he asked to leave that position?

Comer: Lee resigned, and as you certainly know, I can’t discuss personnel issues.

Before coming to Sitka, Comer ran a system of nearly thirty hospitals and free-standing emergency rooms in Arizona. He said the issues facing Sitka Community are the same ones facing hospitals across the country.

“All of the challenges and problems that hospitals are facing in the lower 48, they’re now hitting Alaska, it’s just taking a little longer to get here,” he said. “And so we’re dealing with the same issues that every other hospital that I’ve ever run has been dealing with recently.  So, it’s nothing new, it’s just, kind of, getting our arms around it, getting a better feel for what all the issues are, and, like I said, getting those plans in place to address them.”

Comer has recently outlined ambitious plans for the hospital, including major recruitment, regional collaborations, investment in telemedicine, and satellite clinics. He said his ultimate goal is to make Sitka Community Hospital the dominant health care provider in Southeast Alaska.

That vision still stands, he said.

Asked whether what he has learned has made him regret taking the position, Comer said, “not at all.”

Before adjourning for the night, the assembly directed the city administrator and municipal attorney to work with Comer to come up with options for addressing the hospital’s situation.