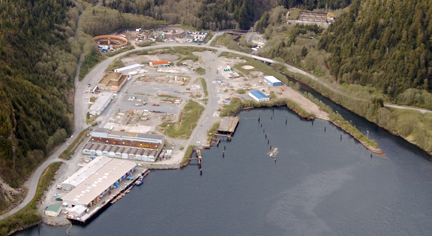 A Sitka-based seafood processor has cleared the first hurdle toward a major expansion — in its hometown.

The board of Sitka’s Gary Paxton Industrial Park on Wednesday (12-17-14) approved the sale of a significant portion of park waterfront to Silver Bay Seafoods.

Plans for a joint venture in a marine services center remain on hold for the time being. 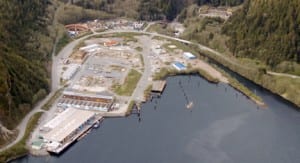 In just eight years, Silver Bay has already acquired a substantial portion of the park, including the plant and dock at lower left, and nearby bunkhouses.

The deal won’t be final until the Sitka assembly has its say — and ironing out the details alone may take several more meetings — but the prospect of transforming the former home of Sitka’s pulp mill into a huge seafood plant and marine services center clearly has the public’s attention.

“Jobs, jobs, jobs. Jobs have always been Number 1 since the pulp mill shut down. And that’s what this site was to be developed for,” said Nancy Davis, one of the original board members of the Gary Paxton Industrial Park.

“The board’s protection of the waterfront, which was so important when we began, was to prevent the lease or sale to someone who would just let it sit and have nothing happen. Example: The Boat Company.”

The small cruise line’s plans to stage its ships here went south with the economy in 2008. But so did the plans of True Alaska Bottling. The city sold TAB its plant in 2006. Water bottling never panned out, and Silver Bay attempted to buy the 3-acre site in foreclosure, but other investors have held on to the vacant building ever since.

Some argue that TAB is the main reason to keep the park in city hands, and lease property to Silver Bay.

“No matter what somebody puts on paper,” said Pat Glaub. “It doesn’t tell what the actual future will be.”

A slide from Silver Bay’s presentation to the GPIP Board. The proposed purchases would put much of the 11-acre waterfront in the processor’s hands. (KCAW photo)

“I had a conversation today about an ice facility for Bristol Bay, which is a three-barge ice-producing equipment. Something in the neighborhood of 1,200 tons of ice a day, to help with Bristol Bay quality issues.”

The park board has heard proposals from plenty of dreamers, but Glaub is different. He helped develop the innovative processing lines for Silver Bay’s Sitka plant and two others. His wants to establish an engineering firm in the park that converts Navy barges into floating processors.

Glaub says he has an amicable relationship with Silver Bay — he even has an ownership stake in the business — but he’d rather remain independent, and control his own future.

Rich Riggs, the CEO of Silver Bay, doesn’t rule out working with Glaub. “I really look at what Mr. Glaub has proposed as a complement to this marine services center.”

Riggs and board chair Troy Denkinger outlined Silver Bay’s proposal for buying most of the remaining waterfront in the park, for fish waste processing, expanded cold storage, and a joint venture with Halibut Point Marine to build a marine services center. The facility would have a 250-ton travel lift to haul the fleet’s biggest boats, and on-site tradespeople in welding and fabrication, fiberglass, electronics, and propulsion.

Riggs suggested that Glaub’s business could join the suite of services available at the park.

“So what we have done is provide a space within Area F for those exact operations, and look forward to it complementing this marine services center.”

Glaub stated bluntly that working upland on a site, surrounded by Silver Bay, was unacceptable.

Other members of the public attending the meeting were also concerned about Silver Bay’s monopolizing the site.

Jeff Farvour is a commercial fisherman and boat owner. Several years ago he brought forward a citizen initiative to bring large land disposals at the industrial park under voter control. The city challenged the initiative language, and its been tied up in court ever since. Still, Farvour advocated on behalf of the public.

“Just on first blush, I guess I’d be more of a proponent of having more diverse tenants out there. I think that might be in the best long-term interest of the city.”

And the city does have interests in its industrial park. Foremost among them: A multi-purpose bulkhead dock. The city already has $7.5-million in hand for the dock. Silver Bay’s proposal asks the city to add infrastructure for a travel lift to the bulkhead. Silver Bay, on the other hand, would buy the 250-ton travel lift.

Board member Ptarmica McConnell did not want to put the cart before the horse.

“I think that before we can really make a decision on those waterfront lots in question, that we need to talk about the multipurpose dock, and the money we’ve received for it. Whether we can use some of that money for the haul-out portion of it, and obviously we’d have to look for more money to finish it.”

Industrial park director Garry White said he’d be willing to investigate that question. He suggested that proceeds from leases and sales might be used to cover the additional $3-million needed to included a haul-out facility with the bulkhead dock.

This is when city administrator Mark Gorman stepped in.

“We need to be clear in what the community of Sitka needs in that bulkhead, and it should complement what Silver Bay is doing. But first and foremost that facility is for the public. If it’s perceived that we’re building it for Silver Bay, there’ll be a backlash.”

Board member Dan Jones proposed removing 35,000 square feet from Silver Bay’s proposed purchase, immediately upland of the dock. His objective was to further protect public access to the dock. “You can’t have a dock without uplands,” Jones said. He offered an amendment to this effect, but it failed.

In the end, the board approved only some of Silver Bay’s offer. They agreed to sell the park’s former wastewater treatment building, which Silver Bay will use to build a fish oil plant. They also approved the sale of the large parcel just to the north of the TAB building. If approved by the assembly, the two sales would be worth about $1.1-million.

And finally, the board approved leasing the former pulp mill administration building to Silver Bay for $1 per year until certain covenants expire on the property, and then selling it to the processor for $233,000.

Park director White said the building had been appraised at $0 and was considered a liability at the site. Board member Chris Fondell ask White to draft language in the agreement to ensure that the building never be returned to city ownership.

Details of the rest of Silver Bay’s acquisition offer will be hammered out in a work session with the assembly. Large questions hang in the balance: The city has been looking for a solution to marine services for a long time, yet it has been burned before by ambitious property schemes in Sawmill Cove.

Mark Gorman said some “shuttle diplomacy” might help allow both Silver Bay and Alaska Pacific & Packing to realize their goals for the site.

Park board chair Grant Miller, participating by phone, said the entire proposal met his expectations for the park.

“Whatever it takes, I think we need to do it. We’ve been hemorrhaging boats from Sitka for too long now.”