Sitka Community Hospital will get a $1-million infusion of cash from the Sitka assembly, in order to meet short-term expenses.

A long-term solution for the hospital’s cash woes is still on the horizon. 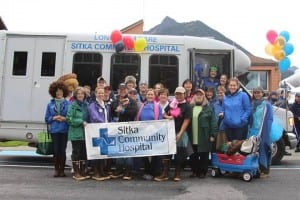 There was no public opposition at all during the assembly’s last regular meeting of 2014 to increasing Sitka Community Hospital’s line of credit.

Assembly member Matt Hunter said there really was only one choice.

“If we don’t pay this, the hospital cannot exist. They need the money. They’re not going to be able to keep the doors open or make payroll if they don’t get $1-million soon. And let’s say for some reason we decided not to do it. We still have to pay $1-million, and we have no chance of raising additional revenues. We’re going to drop services and jobs. This is a no-brainer to extend this.”

During public testimony, the hospital’s director of outpatient services, Kay Turner, and board chair Celeste Tydingco, read a prepared statement describing the long decades of service provided by the hospital. “We’ve been there when you needed us,” they said. “Now we need you.”

Marilyn Coruzzi is a physician. The crisis didn’t add up for her.

“We’re working 10-12 hour days and being encouraged to work even harder. Accounts receivable is this phenomenal number. We really don’t understand how we got where we are.”

“I feel like Jeff has the skills to help us figure out a new plan. Whether that’s collaboration with SEARHC, figuring out what we do well — I don’t know what it’s going to look like. But I’m committed to this process, and I’m committed to and supporting the leadership in this process. And that includes you guys.”

Jeff Comer appeared via teleconference. He told the assembly that the hospital had deferred $650,000 in obligations last week. The expenses include health insurance premiums, retirement contributions, and payments to vendors. He said the $1-million would create “breathing room” to work toward a long-term solution, which he anticipated to be 6-9 months out.

The city’s chief administrative officer, Jay Sweeney, has been working mornings at the hospital to help assess finances there. His conclusion wasn’t any brighter.

But revenues are expected to come in. Municipal administrator Mark Gorman said the hospital should have a plan in place within the next 4 weeks to control the damage, and to prevent a repeat of this request in the near future.

The assembly voted unanimously to support the $1-million loan. Before he signed off, Comer said “It’s going to be a rough couple of months for us.”