The secret history of Soviet whaling 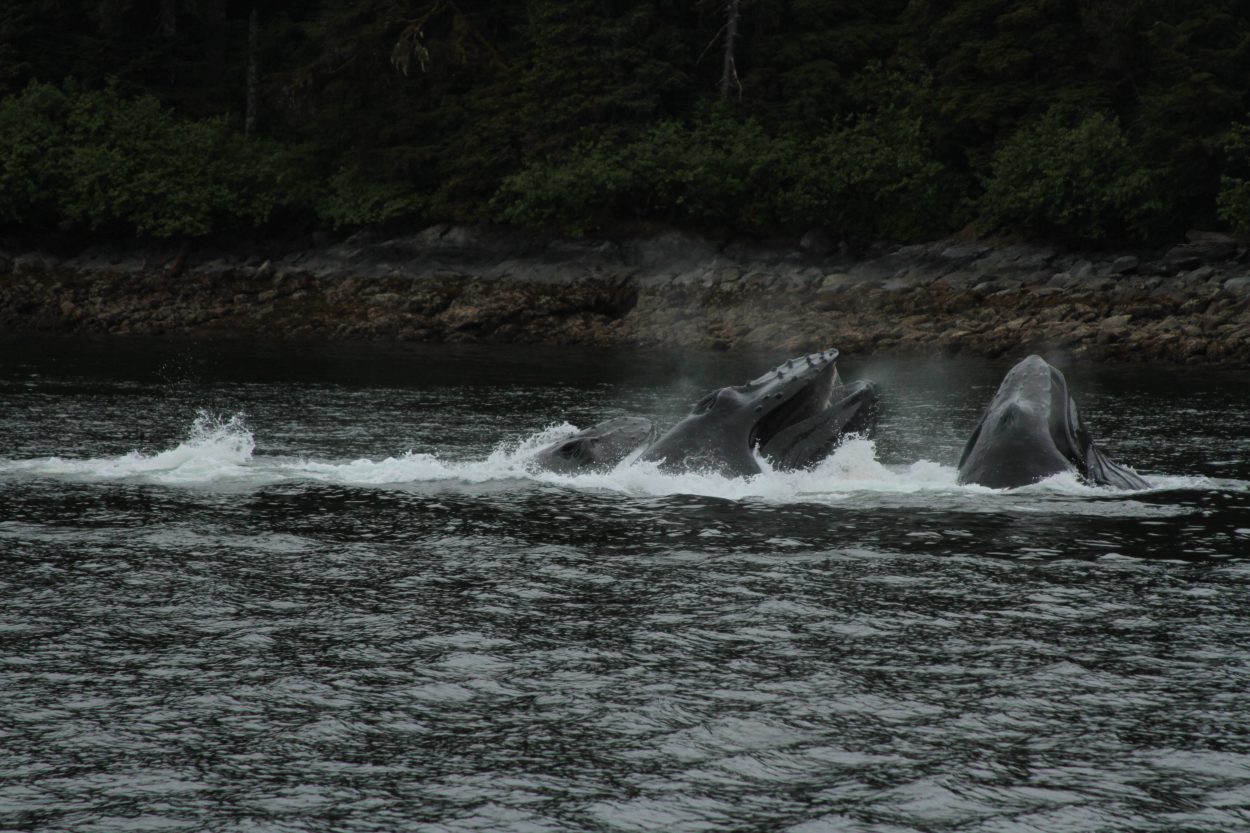 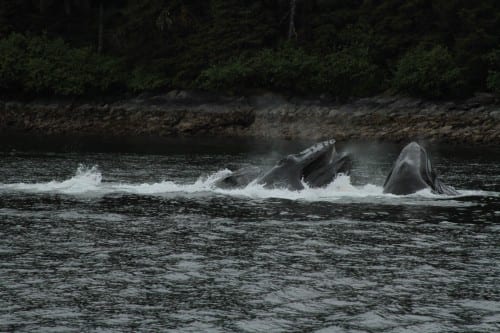 Scientists estimate that there are now more than 21,000 humpback whales in the North Pacific, and sometime in the next few weeks, federal officials will decide whether that’s enough whales to declare them no longer at risk of extinction.

But one question researchers have yet to answer is how many animals there were before commercial whaling drove humpbacks — along with most of the great whales — to the brink of extinction.

To solve this mystery, it turns out, researchers have had to take a trip back in time — and into the secret history of Soviet whaling in the North Pacific. 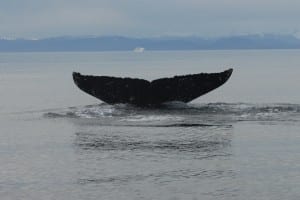 So how do you figure out how many humpbacks there were before whaling?

Wade: One name for it is a back calculation. We’re basically running a population dynamics model backwards…

And he says, in theory at least, answering this question isn’t complicated. Researchers take the number of humpbacks killed during commercial whaling, and add that back to the current population — while taking into account things like population growth.

Wade: So all you really need is a good, complete, and accurate record of the whaling numbers, how many whales were killed. You need a current estimate of abundance…and you put that all together in a modeling exercise and get an estimate of how many whales there were at some time period in the past.

Waldholz:  So you said, all we need a good, complete and accurate record of how many whales were killed.  Do we have that?

Wade: [Laughs] That can be the most difficult part.

Ivashchenko: I can give a short background history of the Soviet whaling, where it started with falsifying.

Soviets? Falsifying? That may sound more like a Cold War thriller than marine biology – but that’s exactly what biologist Yulia Ivashchenko has been studying for the past several years. Originally from Russia, Ivashchenko is also a biologist with the National Marine Mammal Laboratory in Seattle.

When most people imagine whaling, they picture Moby Dick. But in the North Pacific, industrial whaling was a 20th century phenomenon, and it was conducted by just a few countries — especially the Soviet Union and Japan.

By 1946, those countries had formed the International Whaling Commission. It set limits on how many whales could be taken, and what kind. It actually banned killing humpbacks after 1966 because their numbers were so low.

So in other words, whaling in the Pacific is both recent and well-recorded. But for a long time, those records were wrong.

“The problem with the Soviet whaling was that our system in the Soviet Union, [the] economical system, was very different than it was in other countries,” Ivashchenko said.

Under the Soviet system, every industry had targets to meet.

“That’s why the Soviet whalers, they would go and try to kill as many whales as possible,” Ivashchenko said. “Because if you kill many whales, and you meet the target, you will get a very nice bonus as a salary.”

For those in the whaling fleet, it became much more important to beat those targets than to abide by whaling regulations.

“Soviet whalers ignored everything,” Ivaschenko said. “They were killing any whale they wanted in whatever place they wanted.”

And then the Soviet Union would lie to the International Whaling Commission. Some scientists outside the Soviet Union suspected this was happening. But they couldn’t prove it, until a chance meeting in the early 1990s.

Ivashchenko tells the story of an American biologist, Bob Brownell, who was talking to a Russian colleague, Alexey Yablokov. Brownell was complaining about how little data there was on right whales. At this point, right whales had theoretically been protected for six decades.

“[But] Yablokov actually said, ‘Oh, I can provide you with a lot more biological data on the right whales,'” Ivaschenko said.  “So Bob asked, how many are you talking about? Five? Ten? Fifteen?'”

And that’s how it started to come out. It turned out that most of whaling fleet was keeping two sets of records. The falsified version would go to the whaling commission. But the true catch records were also preserved.

After the fall of the Soviet Union, it became possible to make those numbers public. In 1994, Yablokov published the first paper laying out the true scale of Soviet whaling.

And the numbers were huge: in 60 years of Soviet whaling in the Southern Ocean — that’s all waters south of the equator — the fleet killed about 330,000 whales. But they only reported 185,000.

According to Ivashchenko’s research, in just one season in the North Pacific, the Soviet fleet caught over 15,000 sperm whales. A single boat could process up to 200 whales in a single day, she said.

Chenoweth:  I’m sorry can we just do that math on that.  That’s more than eight whales an hour.  That’s an average of a whale every seven minutes!   I feel like we need to take a step back and just explain how that is even possible.

Waldholz: Yeah, it was a massive endeavor. A whaling fleet would have a central factory ship with up to 800 people on board. And then they’d have the catcher boats — smaller boats with 20 to 25 people on board.

“Their job was to spread around during the day and go looking for whales,” Ivashchenko said. A factory ship might have 20 catcher boats, spread out in a formation that could stretch 200 miles from end to end. The boats would move forward in a line, combing the ocean for whales.

“They were incredibly efficient,” Ivashchenko said. “They just were very efficient at finding whales and killing them…It’s just staggering we have anything alive in the ocean left.”

Meanwhile, Soviet scientists went to heroic lengths to save the real data. Ivashchenko tells the story of Dmitri Tormosov, a biologist with the fleet.  Hs job was to organize these documents called “whale passports,” which documented data on every individual whale that was killed — exactly the kind of information that Bob Brownell was after for right whales.

After the data was analyzed, the passports were usually destroyed. But Tormosov held onto them – storing them in his potato cellar.

“In some ways he was definitely risking a lot,” Ivashchenko said. “If these whale passports [were found] – they didn’t have status of the secret documents, but I don’t think  it would be anything positive if anybody knew that he was hiding this original information in his house.”

Chenoweth: Right, because they may not have the status of secret documents, there’s really only two reasons why you keep things in a potato cellar —  either you think it will get you into trouble, or it’s a potato! This guy is my hero.

In all he saved 57,000 records. And because of stories like that, by the mid-2000s, scientists had managed to piece together pretty accurate records for the Southern Ocean, which is where the most intense whaling took place.

But until recently, the numbers in the North Pacific were still a mystery. Then Ivaschenko took a trip to Vladivostok, in eastern Russia. Vladivostok is right near the border with China, in eastern Russia. It was a home port for the Soviet whaling fleet. Ivaschenko went there to visit scientists who had worked on whaling ships, and they suggested she visit a public archive in town.

“I wasn’t expecting much,” she said. “And then I found this pile of different kinds of reports from different fleets…”

Those reports included true catch numbers from boats in the North Pacific. Just sitting there, in a dusty public archive in Eastern Russia.

Waldholz: And what did you think…you’re sitting in this archive, they bring you a catalog, did you think, ‘Oh my god, Eureka?’ Or did it take awhile?

Ivashchenko: Oh no, once I saw the list…I knew I found the treasure! (Laughs)

Ivashchenko has since been back several times. So far, she’s documented that the Soviet fleet killed about 190,000 whales in the North Pacific, mostly sperm whales — and only reported 169,000.

Those are smaller numbers than in the Southern Ocean, but there were fewer whales to begin with. And because the population in the North Pacific was much smaller, Ivashchenko says the impact was actually larger.

As for humpbacks, Ivashchenko estimates the Soviets caught more than 7,000, most of them in the space of just three years. They reported only half that number.

For researchers like Paul Wade, this is the missing piece. His team has been waiting for Ivashchenko’s numbers. And once they’re able to run their models,  we’ll have a good estimate of how many humpbacks roamed the Pacific before industrial whaling.

But this isn’t a quick process.

“So I made the calculations sound relatively simple,” Wade said. “But in fact for humpback whales it’s not so simple…We’re now in a position where we can move forward with that process, but it will still be complicated, and it will still take multiple years to actually get the analysis done.”

Meanwhile, the decision on whether or not to remove humpbacks from the endangered species list will come sooner. And that’s because, when it comes to the Endangered Species Act, it’s actually not about getting a species back to its historic numbers. It’s about something much narrower.

So: to de-list or not to de-list? That’s the question, next time.