State game board to review deer seasons, limits for Sitka 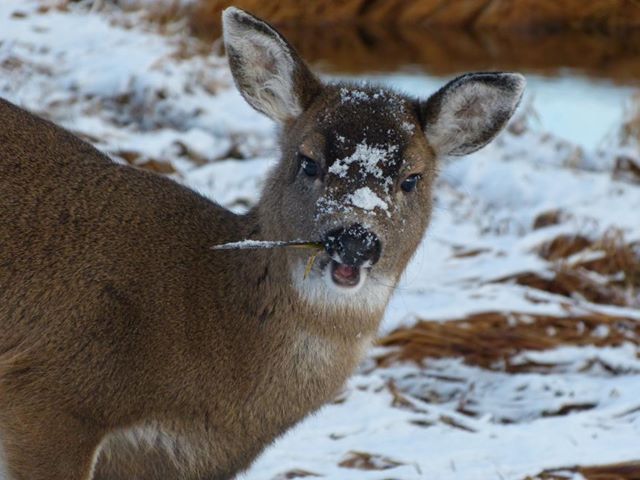 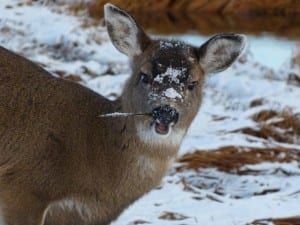 A proposed delay in the start of “doe season” is meant to protect fawns — but may not make sense biologically. (KCAW file photo)

The State Board of Game meets this weekend in Juneau to consider a number of proposed changes to Southeast hunting regulations — including some rules important to Sitka hunters of deer, mountain goat, and bear.

Sitka falls in Game Management Unit 4, which is the so-called ABC islands: Admiralty, Baranof, Chichagof. The Board of Game looks at regulations on an unit-by-unit basis. Most of the attention at this meeting will be on other units.

But there are four proposals for Unit 4 that — if adopted by the board — would mean significant changes in how Sitkans hunt.

Review the Sitka-area proposals.
See the Board of Game agenda.
Listen to the live stream of this weekend’s (Jan 9-13, 2015) meeting.

Proposal number 10, for instance, would change the opening date of what Sitkans commonly call “doe season.” As things stand now, hunters can begin taking bucks on August 1, and then does on September 15. Proposal 10 would push that latter date back a month, to October 15.

The point of the proposal, which was submitted by a member of the public, is not to protect does — it’s to protect fawns. Because what we commonly call “doe season” is actually “any deer season,” and shooting even fawns is legal.

This sounds cruel, but according to biologist Phil Mooney, the wild is a cruel place for fawns.

“Biologically, they have a very high natural mortality, ranging from 30-65 percent, meaning that those animals are not going to make it one way or the other. So if you harvest fawns, it wouldn’t be additive. It would be compensatory.”

For a lot of hunters this goes against the grain of what they’re taught — often from childhood — about deer hunting. Does and fawns are supposed to be off-limits to protect the population. In Southeast Alaska, however, the largest single factor in deer survival is weather. In 2007, heavy winter storms killed 85-percent of the deer on Northeast Chichagof Island. Compounding that near-disaster was an elevated deer population, which had severely depleted the habitat.

“Quite frankly it’s hard for a lot of hunters who are brought up under a buck-only system to take does. And so there’s a component out there that says, I need meat, I’m taking any deer. And another that says, Why are you shooting a fawn?”

Proposal 9 is also about deer, and recommends increasing the bag limit in Unit 4 to six per hunter, with the last two deer being bucks.

This proposal was also brought forward by a member of the public. Now someone is calling the radio station to remind me that in Sitka the bag limit is already six deer — but two of those deer, technically, are available under federal subsistence regulations that apply only to Sitka and residents of other subsistence-qualified communities. So, strictly speaking, our bag limit is four deer per year.

Mooney says the pressure for increasing the bag limit to six is coming from outside of Sitka, from hunters in non-subsistence communities who would like to hunt on the ABC islands. He doesn’t consider Proposal 9 to be a conservation matter. And he says that, statistically speaking, the 4-deer bag limit is more than sufficient.

Even Juneau residents who go hunting are doing pretty well.

“The average is 2.3 per successful hunter, over ten or twenty years. So it’s under-utilized. Now there are some designated hunters that get more deer, but if you look at the number of people involved we’re still underutilized. And quite frankly, for most people, if you get two deer you’re in pretty good shape.”

The last two proposals affect far fewer people, but also represent major changes. Proposal 8 would create a resident-only drawing hunt for mountain goat around Blue Lake, Medvejie, and the south fork of the Katlian River — both areas favored by Sitkans because of their relatively easy accessibility.

The mountain goat population is down significantly on Baranof Island — almost by half, in fact — due to the same harsh winters that killed many deer a few years ago. The other complication is that hunters in some areas were taking too many females — nannies — around 42-percent of the harvest, according to Mooney. So he’s used his emergency order authority to close those areas and force hunters to go elsewhere.

A resident-only draw hunt — or lottery — sounds like a reasonable approach to reopening hunting around Sitka, with one exception. “Resident” means “anyone in Alaska.”

“There isn’t a good way to set that up so that you could have a local preference.”

Mooney says the decline in the goat population seems to have bottomed out, and the registration permit system in place now appears to be working. Also, Sitka hunters are getting better at telling billy goats from nannies — though they look very similar. The nanny harvest this year has dropped to less than 12-percent.

And finally, a proposal about brown bears — probably the most tightly-regulated type of hunting in Unit 4. Proposal 11 recommends creating 7 so-called “non-resident second-degree of kindred” hunts. This is a rather wordy way of saying that a Sitkan could take an out-of-town relative hunting for bear. Like goats, it requires a registration permit. The Department of Fish & Game has issued as many as 30 permits on a given year — but there’s the rub. In a Brown Bear Management Strategy developed between the state and the Forest Service, 4 hunts was established a guideline.

Mooney says he’s not hung up on the number of kindred hunts. The proposal simply requires the state to settle on something.

“It would just limit the total number to someplace close to what was recommended in the BBMS. They were calling for four hunts, but we’ve had as many as 30 second-degree kindred hunts, so we’re orders of magnitude out of what was in the recommendation.”

Of all the Sitka-area proposals, this one about kindred hunts is the most likely to fly. Where it lands — how many hunts are allowed, and how the department regulates them, through a draw permit or whatever — is up to the board. Mooney says, “We’ll see where they go with it.”