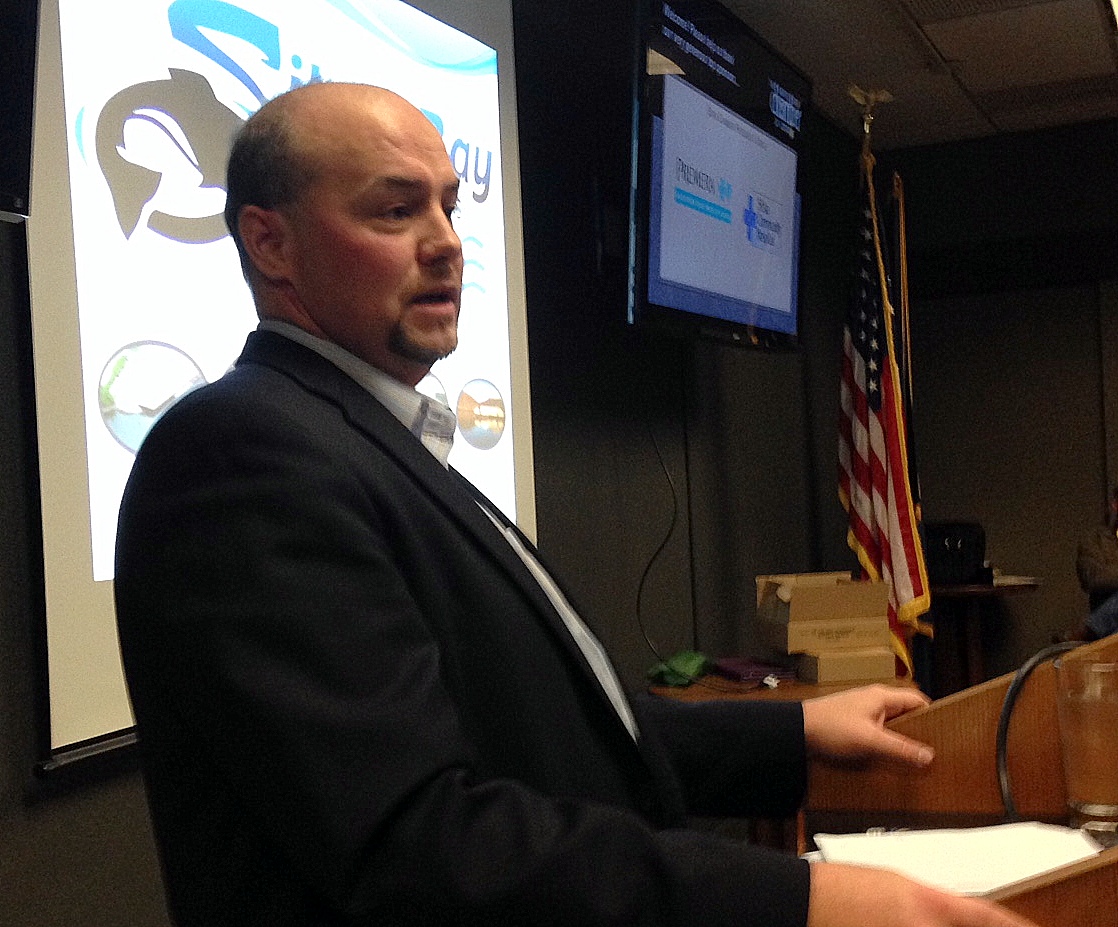 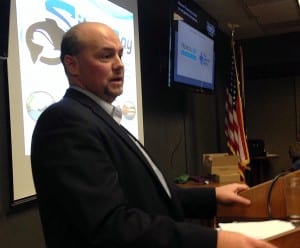 Silver Bay CEO Rich Riggs told the Chamber that even though his company has operations all along the coast, “Our home is here in Sitka.” (KCAW photo/Robert Woolsey)

The news of the sale has been public since November, but Silver Bay CEO Rich Riggs added details during a presentation to the Sitka Chamber of Commerce today (Wed 1-14-15).

The fisherman-owned processor is only 8 years old, but has grown rapidly in Alaska and on the West Coast. Silver Bay is hoping to win approval to purchase or lease the remaining portions of Sitka’s former pulp mill site to expand its local operations.

The board of the Gary Paxton Industrial Park will meet tonight (1-15-15) at 6 PM in Harrigan Centennial Hall to finalize its recommendations for leasing or selling land to Silver Bay, Alaska Pacific & Packing, or both. The deal will go before the Sitka Assembly at its next regular meeting on January 27.

It’s impressive when the slides start going up: Vacant or under-utilized industrial properties in Sitka and Valdez remodeled and now processing millions of pounds of salmon. New plants built from the ground up in Craig and Naknek, a buying operation in Puget Sound, a herring plant in San Francisco, and soon a squid processor in Ventura.

This is big-time seafood processing, and it just got a little bigger.

“I’m sure everyone in this room is familiar with Charlie the Tuna. It definitely demonstrates that Silver Bay has arrived.”

Dongwon Industries controls 75-percent of the tuna market in Korea. In 2008, Dongwon acquired Starkist, the leading tuna producer in the United States — but neither company cans salmon.

But Silver Bay does, starting now.

“And so we’ve always expanded the operation in Sitka, and it’s also our largest facility by footprint. And what is going on right now is nominally an $8-million project for canning. We’ve got canning equipment that’s going in, retorts, bright stack, new loading dock, new boiler room, and this is all going on right now.”

The sale of the 12-and-a-half percent ownership stake to Dongwon leaves Silver Bay with capital for expansion, but more important, access to the canned seafood market. The purchase gives Dongwon access to salmon. Lots of it. Riggs told the Sitka Chamber that since starting business in 2007, Silver Bay has purchased 130-million pounds of salmon.

The processor was founded with 35 fisherman, and that number has grown to over 300. The size of everyone’s ownership stake has been reduced proportionately by the sale, but other than that, Riggs says…

“Nothing will change with Silver Bay. Not a single fisherman-owner goes away. It’s just a dilution. The management team will stay the same. We’ll add two board seats, at least one of which will be a fisherman seat. Otherwise, mechanically from the outside it’s the same company, just stronger.”

One of those two additional board seats will go to senior management at Starkist.

Riggs discussed the Dongwon sale in the context of Silver Bay’s overall growth, which is once again focused on Sitka. The board of the Gary Paxton Industrial Park, where the processor is located, is preparing to send a proposal to the Sitka Assembly that would lease or sell much of the remaining property at the park to Silver Bay.

A competing offer from Alaska Pacific & Packing remains in play. That company builds equipment for the seafood industry. Local officials are hopeful that the two ventures can work cooperatively, in order to maintain a diversity of businesses at the park.