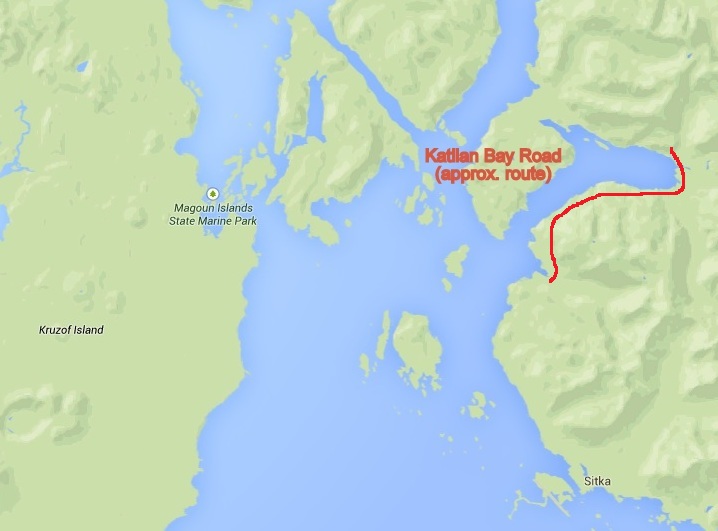 2014 was a big construction year for state highways in Sitka, but the budget crunch in Juneau may force a change in plans for 2015.

The largest single roads project in Sitka slated for funding this year is a 6-mile extension of Halibut Point Road into Katlian Bay. The one-lane, gravel road would connect lands at the head of the bay owned by Sitka’s urban Native corporation to the rest of the local road. 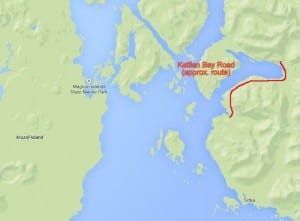 The Katlian Bay Road was authorized, along with several other transportation easements, in Public Law 109-59, aka “SAFETEA-LU,” and passed in 2005 when Rep. Don Young chaired the House Transportation Committee. (KCAW graphic)

Sitka’s senator, Bert Stedman, is fan of the project.

“Katlian Bay is moving forward. We have a lot of community members who are shareholders in Shee Atika, and they have a large land holding in the back of Katlian Bay. It’s got a lot of flat ground, a lot of gravel resources, rock, and recreation. It’s got a nice river in it, with a lot of salmon in the summer. There’s a lot of deer, and goats up the valley. Good recreation. It would give Shee Atika, at their choosing, the ability to develop that property out over the next century.”

The $12.5-million in bond funding was approved by voters in 2012. And the so-called STIP, the Statewide Transportation Improvement Plan — which is the roadmap for annual construction projects — still shows the money allocated for 2015.

Visit the STIP online, and enter “Sitka” in the “Place Name” search field.

Preliminary work has begun on the road, which crosses some city land, and at least two miles of Forest Service land.

“The state contracted with people to do archeological, wildlife, fisheries and aquatics work, as well as landscape architect work on the effects of putting in that road.”

Edwards says contractors were allowed to cut very small-diameter trees to do their survey work.

Typically, all the preliminary survey and assessment work — regardless of the agency who performs it — is compiled by the Forest Service into something called a “NEPA” document. NEPA stands for National Environmental Policy Act.

Whether this road will fall under NEPA rules is unclear. The authority to build the road comes directly from Congress, in public law 109-59 (sec. 4407), which was passed in 2005. According to Edwards, Congressman Don Young inserted the language both authorizing the road and creating the right-of-way. The right-of-way is three-hundred feet wide, crosses the width of Baranof Island to Rodman Bay, and is good for 50 years.

Read the MOU between the United States and Alaska regarding Section 4407.

Nevertheless, Edwards says the Forest Service will pursue a full NEPA process for the road, including taking public testimony. When that happens — if ever — may depend on whether the $12-million sticks around.

Earlier this month Gov. Walker has warned Alaskans that the state could be in deficit by as much as $4-billion this year. Sen. Stedman is understandably cautious in his thinking about this project.

“Nothing’s on the table. Every program and expenditure has a support group for it. Aside from that our ultimate responsibility is the welfare of the entire state. And quite frankly, that’s what is in question right now.”

Stedman is taken aback by some other legislators who are lining up capital projects in this climate — he’s particularly unhappy with Anchorage’s request for $300-million.

The governor has already made tough decisions regarding the Juneau Access Project and the Knik Arm Bridge. Whether or not the Katlian Road slips through doesn’t seem like a deal-breaker for Sitka or Sen. Stedman. “Look at the amount of pavement that’s been put down recently,” he says. “We’ve done well.”