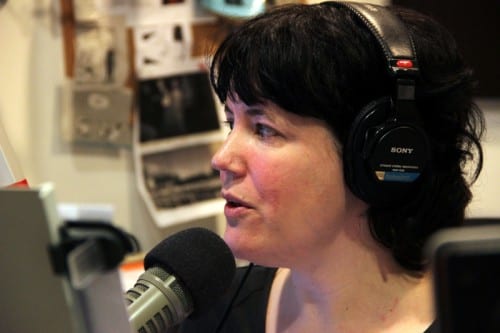 Marconi-Wentzel has been hosting Morning Edition on and off since 2004. On her last day, she said, “I hope to be back some day. Raven Radio and all of the listening communities will never be far from my thoughts.” (Rachel Waldholz/KCAW photo)

Thousands of KCAW listeners across the region – from Yakutat to Port Alexander – have awoken to the soothing voice of Melissa Marconi-Wentzel saying, “Good Morning. It’s a minute before six o’clock.”

On Friday, January 16th, 2015, she greeted early risers for the last time (at least for the foreseeable future). A message from Marconi-Wentzel, to the listening region:

“I just feel so blessed to have been a part of your life. I do feel like it’s a great trust and I’m thankful that you’ve put your trust in me.” 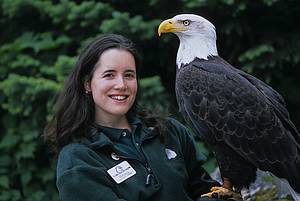 Marconi-Wentzel moved to Sitka with her husband in 1982. Prior to joining KCAW in 2004, she was the program manager at the Alaska Raptor Center. (Photo courtesy of Patrick J. Endres )

Marconi-Wentzel came to Raven Radio as a volunteer and was soon hired as a reporter in November of 2004. She worked alternately with KCAW News Director Robert Woolsey as host from the beginning, arriving at 5:30 AM and conducting the morning interview in the 8 o’clock hour with local politicians, leaders, and members, of the community.

Marconi-Wentzel became KCAW’s Program Director in 2007. A year later, she took a break to raise a family (three boys, 2, 4, and 6-years-old!) and earned her degree in Communications at UAS. She returned as Morning Edition host in 2013.

KCAW sat down with Marconi-Wentzel, to look back on the years of early mornings at the microphone. Below are some highlights.

How she ended up at KCAW: “At the Alaska Raptor Center, I was with my husband running the bird program. I was volunteering at KCAW as well and I always wanted to be a reporter. I decided I was ready to start working with people instead of birds. And so I just told Rob Woolsey, ‘I would like you to train me to be a reporter.’ And so he did. I was hooked.”

Melissa Through the Years (Slideshow)

On the appeal of radio in a small town: “I really am drawn to storytelling; to enabling individuals and communities to share their narratives and to convey those narratives in a manner that evokes a great response from people. I saw reporting with Raven Radio in Sitka as a great opportunity to explore that, especially as it relates to how people react to sound. How do people react to hearing others voices? To hearing the sounds of our community? We define ourselves in terms of our relationships with each other and with the environment. I think radio is so powerful because you can hear that.”

Her favorite, favorite story: “The one where I covered Russian Orthodox Christmas (which won a Goldie Award for Best News Feature Division 2, in 2007). Probably because of the just unabashed joy of the individuals involved. I followed the starring procession and went into the homes, recorded interviews with elders and young children, and recorded the singing. It was a connection to culture and tradition and history that was so vibrantly alive here today. I loved being able to tell that story. And I loved the song the parishioners were singing. It makes me cry every time I listen to it. It was just so beautiful.” 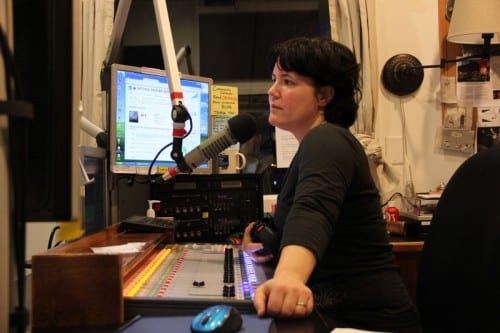 Marconi-Wentzel said she loves radio as an instrument for building community. On hosting Morning Edition, she said, “I really came to understand that it’s all about the ties you create through the airwaves.” (Rachel Waldholz/KCAW photo)

On the intimacy of hosting: “Hosting is so much about the host’s connection to the listener. So during Morning Edition, what you’re doing is creating a three hour experience for the person on the other end. And when I’m there in the studio, I’m thinking not about the entirety of our region – which encompasses so many amazingly diverse communities – but I’m thinking about the individual listener out there.”

On the weather, once upon a time: “Technology is advancing so rapidly. The landscape of broadcast is changing so significantly in so many ways, even on the most mundane of levels. Like how we get our weather. It used to come through on a Dot Matrix printer. Long reams and reams of paper stretching out across the floor, from NOAA, and we’d have to rip and tear the paper and tape it on to another piece of paper and we’d have this stack of paper in the air room to host Morning Edition. And now, it’s all digital.”

On listeners’ feedback, and her hosting style: “As Morning Edition Host, invariably, you’ll get an early morning phone call from someone who is quite upset that you’ve mispronounced a name. Which is great. I love getting correct information. What I hear most frequently, I think, is that folks feel like I am a gentle introduction to their day. I try to be that. I think most people enjoy that style.”

On the secret to a great Morning Interview: “I really try to get to the human story behind the event or whatever detailed thing we’re talking about. The person behind ‘We’re having this event at such and such time.’ The person behind the municipal news story — ‘The assembly passed an ordinance’ — well what does this mean? Who are the people behind the story? What drives them as individuals?”
A recent Morning Interview by Marconi-Wenzel with Assistant District Attorney Jean Seaton and paralegal Elisabeth Shafer about how criminal process serves victims and perpetrators of domestic violence:

On her plans for the future: I’ve been the director of the Sitka Health Summit, which is a new post and I’m going to devote my time fully to that. The organization is at a point where it has the potential to grow exponentially and I’d like to help shepherd it through.