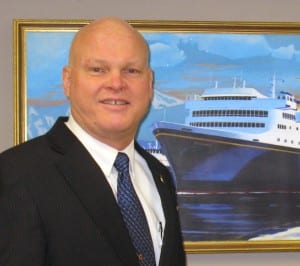 He held the post before, but left under pressure.

Neussl retired from 30 years as a Coast Guard pilot, engineer and manager before entering state service. He was deputy commissioner for marine operations in 2011 and 2012.

He says he has the same assignment as he did the first time around.

He’s not ready to say what might change. Cuts already made include closing bars and gift shops, and installing equipment that regulates vessel speed to save fuel.

Neussl says he has no immediate plans for significant staff changes.

“Capt. (John) Falvey has done an excellent job, I think, as the general manager running the system. He’s been there for a number of years, has extensive knowledge of the system and I’ve got full faith and confidence in his abilities,” he says.

Neussl was appointed by Department of Transportation Commissioner Marc Luiken, who also just began the job. Luiken had the same post from 2010 to 2012 and hired Neussl the first time around. Luiken says his new deputy commissioner is a “proven leader” and will have his support, as will the ferry system.

When Luiken left the commissioner’s job a little more than two years ago, Pat Kemp took his place. He told Neussl to resign, which he did. He was replaced by Reuben Yost, who Walker pushed out when he dismissed Kemp.

Venables says the board was not asked for input on the hiring decision. Neussl says he looks forward to working with the panel again, but the relationship has limits.

“We consult with them when there are issues that need to be consulted about. But they are advisory in nature and that’s the way I see them continuing,” he says.

DOT Commissioner Luiken also appointed a second deputy commissioner, Steven Hatten. He served in the post from 2011 to 2014, overseeing aviation.

The third deputy commissioner is John Binder, who served under Kemp and remained after he left. Binder filled in as commissioner between Kemp and Luiken.

The commissioner has not yet appointed a regional director for what’s called the south coast area of the state. It includes Southeast, Southwest and the Gulf of Alaska.