Mural brings a touch of home, to 400+ students 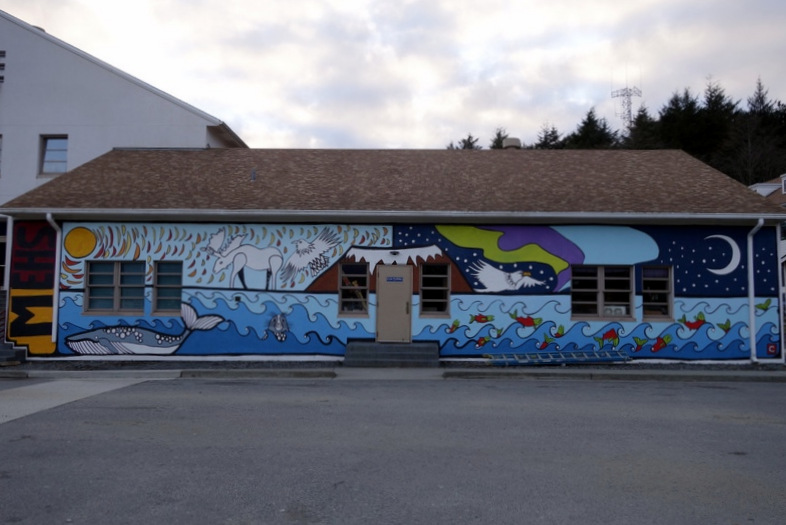 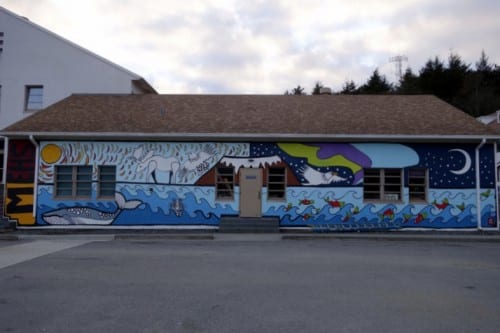 The new mural at Mt. Edgecumbe is inspired by the animals of Alaska, designed by current students to welcome future generations. (Emily Kwong/KCAW photo)

A new mural was unveiled at Mt. Edgecumbe High School last week, bringing a splash of color to the white dormitory walls that house nearly 400 students from across the state. The mural was painted by a local artist and designed by students, as part of an effort to make the state-run boarding school feel more like home.

Since mid-December, artist Cara Jane Murray has been ascending a ladder and painting. Her canvas is a concrete wall that 12 ½ feet high and 71 feet long. 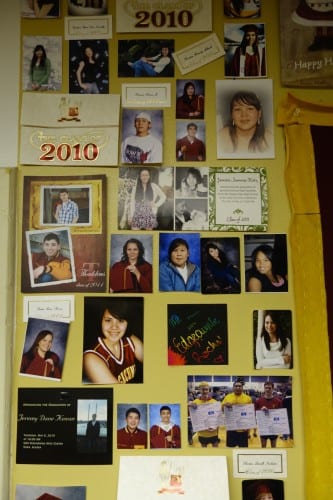 Mt. Edgecumbe opened in 1947 under the BIA. Now run by the state, generations of students have passed through the school. Graduation photos hang on residential principal Andrew Friske’s wall. (Emily Kwong/KCAW photo)

“Today this piece of art is going to be done,” said Murray. “All that’s left is a polyurethane spray and I do a couple of coats of that tomorrow, weather pending.”

The new mural at Mt. Edgecumbe is outdoors, on the front lines of Southeast’s notorious rainfalls. Though Murray did the painting, it was students from Mt. Edgecumbe who came up with the design.

From October to December, Murray met with a small group of them after school and they began talking about what made Mt. Edgecumbe, Mt. Edgecumbe.

Murray said that honor and responsibility and respect were major themes. “Respect for all of the creatures that are in Alaska and a connection with nature. So the question then turned more into, ‘Okay, let’s create some design elements that represent these feelings.’”

They decided to create a patchwork of Alaskan animals, one to represent each region of the state.  There’s a moose for Interior Alaska and a sea lion for coastal communities. Northern lights hang up above and salmon jump down below. One passing student said it looked like they were smiling. 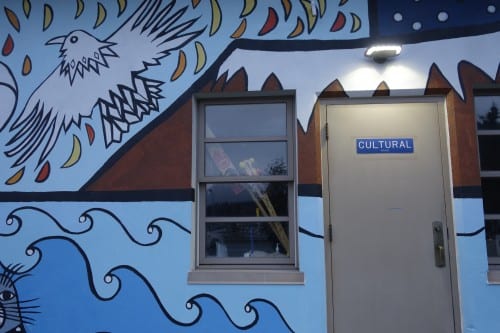 The mural was painted on the front of the Cultural Building, where a variety of after-school programs are taught. Pictured here are a raven and Mt. Edgecumbe. On the opposite side of the mountain is an eagle and the Northern lights. (Emily Kwong/KCAW photo) 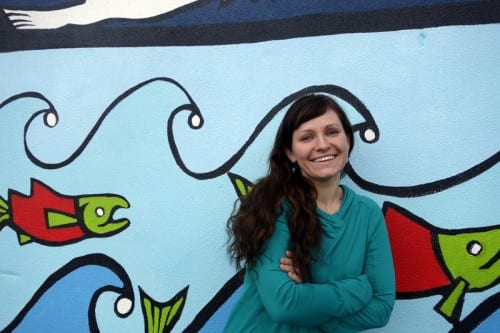 “My favorite part is when I get to put the color red anywhere on a large piece of art,” said Cara Jane Murray, a Haines-native and contemporary folk artist who painted the mural over the winter break. (Emily Kwong/KCAW photo)

All this work is meant to reflect the various homes of Mt. Edgecumbe students, who hail from 110 different communities across the state.

“I think the whale is my favorite part because it reminds me of home,” said student artist Katherine Leinberger.

Katherine is nearly 1000 miles from her home city of Bethel. She says the whale is her favorite because it reminds her whale watching with her grandparents in Kodiak. According to residential principal Andrew Friske, this is exactly what the mural is designed to do.

“Say you have a bus of new freshman coming off the jet and they come through here. I would hope that each one of them could relate to something on the mural,” said Friske. 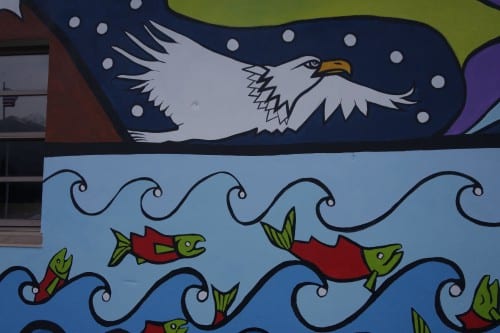 The eagle stands for the Eagle Moiety of the Tlingit Clan and the salmon for Southeast Alaska. (Emily Kwong/KCAW photo)

The mural has been a longtime dream for Friske, who commissioned the mural from Murray after seeing her work in Haines. He says that the secret to getting new students, some as young as 14 or 15, oriented to boarding school, lies in the strength of the students who have already made the transition.

“Orientation, it’s all the student run,” said Friske. “They show them around. Show them all the little tricks: how to get here or there, the shortcut there, how to do your laundry.”

And learning the ropes, Friske says it’s only a matter of time before students start owning the place. Written in pencil below his window are dozens of signatures from graduating seniors, some in swooping curlicue and others in neat print. 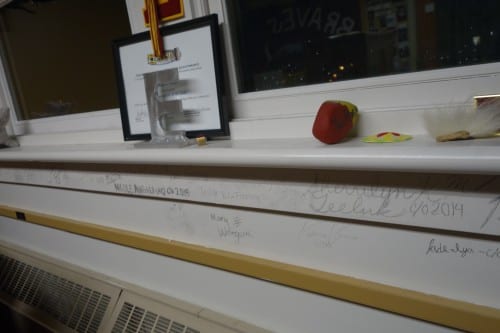 “Students love leaving their mark on things,” said Friske. A few years ago, graduating seniors began to sign a beam in his office and others have followed suit (Emily Kwong/KCAW photo)

“You walk around this entire campus and you’ll find signatures and little sayings here and there all over the place,” said Friske. “The field house has a bunch of beams with permanent market up there that have signatures from 15 years ago.”

I’m with Katherine and her classmates, Danielle Anaruk, from Kipnuk, and Haley Shervey, from Craig. We’re crowded around a 1976 yearbook. “How were bowl cuts ever attractive?” Katherine speculates. Though the haircuts may be different, they tell me that the drive to come to Mt. Edgecumbe is the same. 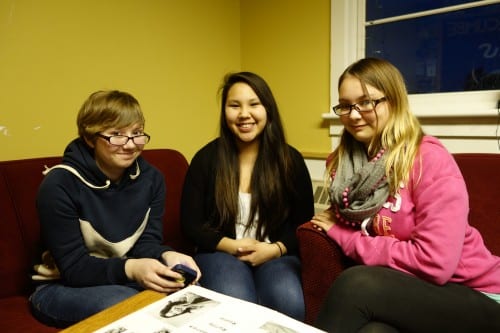 L to R: Haley Shervey, Danielle Anaruk, and Katherine Leinberger. The three were a part of an after-school mural class taught be resident artist Cara Jane Murray. All three have traveled far distances to pursue educational opportunities they couldn’t get in their home cities and villages.

“At home I had zero challenges.  Zero,” said Danielle. “I was just going to school just to go to school. I wanted to come here because I wanted to learn more about things like actually have a challenge to do something.”

Danielle Anaruk is from Kipnuk, population 700. I asked her about the day she got her acceptance letter. She still remembers it.

“I was opening it and I was so nervous, I didn’t even want to look. But I saw the word ‘Congratulations’ and I just knew that I got accepted. I was so happy.”

To their disappointment, time ran out for Danielle and her classmates to actually paint the mural. That was all completed over winter break. But there’s some consolation, they say, in being a part of something big. Something that will last.

Music from the Mt. Edgecumbe Iñupiaq and Yup’ik Dancers.

Murray also painted a mural at Haines High School and recently completed a community mural project at the Sitka Artisans Market. The mural is now at the University of Alaska Southeast campus. (Photo courtesy of Cara Jane Murray)