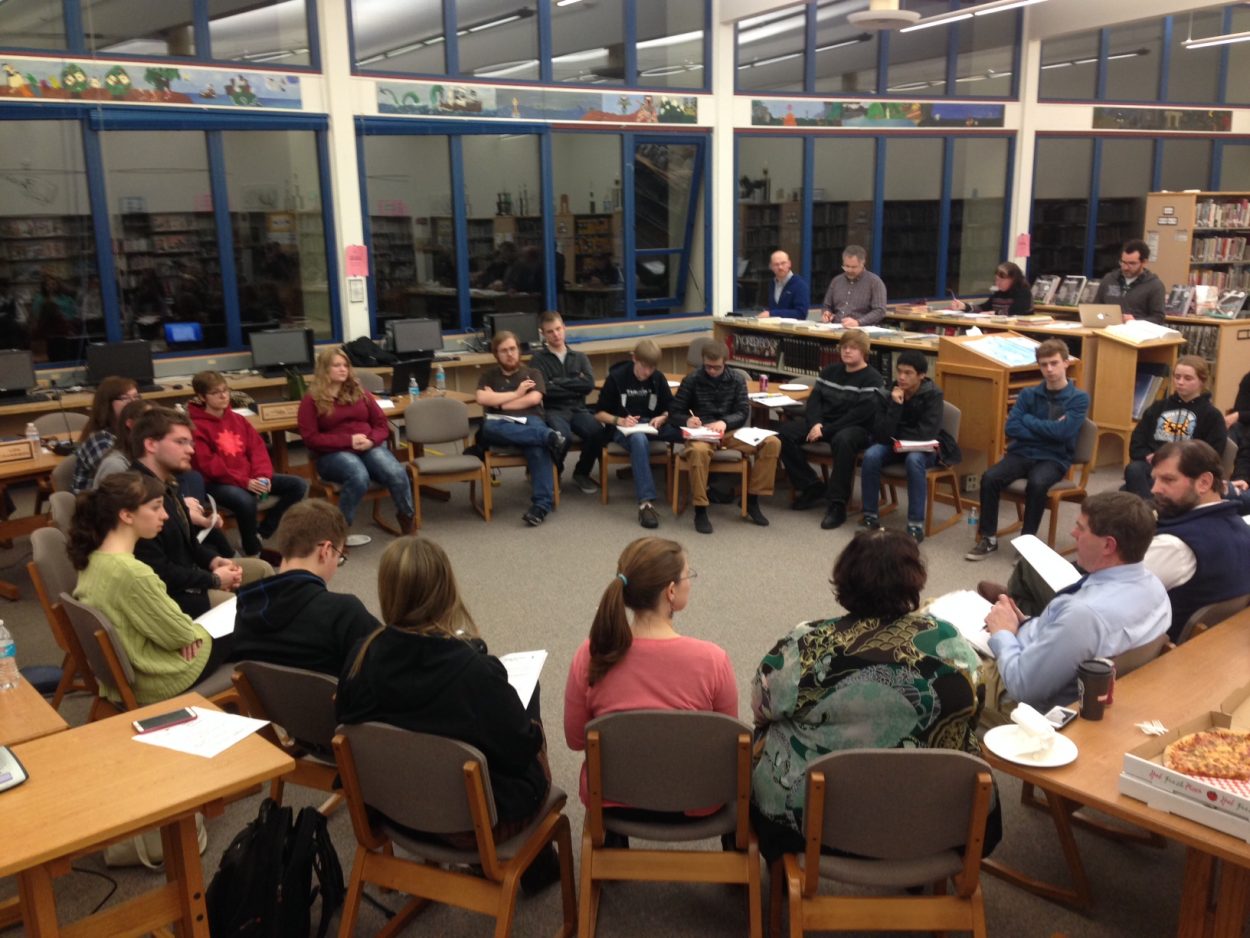 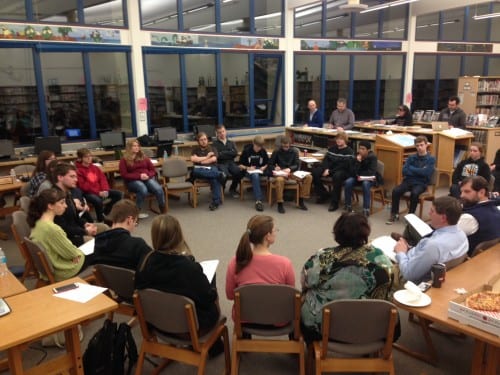 Sitka High student government meets with the school board. In addition to DV and tolerance programs, the council discussed energy efficiency in school buildings, and the high cost of activities. (KCAW photo/Robert Woolsey)

Sitka High’s student body is hoping to create a more respectful and tolerant environment in the school, and they’ve taken their plans to the school board.

In a joint session this week (Tue Feb 3), Sitka High’s student council and the school board met to discuss a pair of proposals that would confront sexual violence and discrimination head-on.

It was just two or three years ago that Sitka’s students and school board sat in this same room, the high school library, ate pizza, and discussed installing Wi-Fi in the commons.
Connectivity is important. But it’s a means to an end. Students have a different goal in mind now.

There was a study done on 282 adult women in Sitka, and they found that 47-percent of them had experienced some form of domestic or sexual violence in their lifetimes here in Sitka.

This is student council president senior Owen Fulton. He’s referring to the Alaska Victimization Survey conducted by the Justice Center at the University of Alaska Anchorage. Women in communities across Alaska were surveyed, including in Sitka. Fulton’s stats are right on the money: In Sitka, and elsewhere around the state, 47 out of every 100 women surveyed reported experiencing intimate partner violence, sexual assault, or both.

Fulton presented the school board with a resolution asking the district to adopt the “Coaching Boys Into Men” program, in partnership with Sitka’s domestic violence shelter.

This struck me as a big shift for student government, addressing sexual violence. After the meeting adjourned, I caught Fulton in the hallway and asked him to explain.

Fulton – Ideally if Coaching Boys Into Men were to be implemented into the Sitka School District we’d see it at Sitka High School, maybe even Blatchley. And it works with male athletic organizations, by providing them with a training session, or a seminar, that the coach leads, and they talk about issues of domestic abuse, relationship violence, sexual violence — how to deal with those situations.
KCAW – How did the idea get started in student government?
Fulton – I had heard about the program before. It’s been implemented in Juneau with a tremendous amount of success. But the idea was formally addressed to us by the SAFV Shelter. They had wanted to see it implemented in the Sitka School District, but they needed a little bit more weight behind their campaign, and they wanted the student council to support them in this project.
KCAW – Are there behaviors among boys that are of concern to the council?
Fulton – In my high school career I’ve certainly seen it, and I’m sure others have too.

We have a huge problem in our school with the way kids treat each other. Challenge Day is normally spread out over a couple of days. It’s a seminar or clinic where they have exercises with the kids, and you get to see people who are having issues similar to your own. And you get to see the same people you see every day in a different light. And you relate more to them.

There hasn’t been a Challenge Day in Sitka High since this year’s seniors were freshmen. Council members who experienced it told the board that the climate in the school changed almost overnight.

Middleton admitted that the program was expensive — about $3,000 — but she hoped that the district would set up another Challenge Day as early as the beginning of next school year.

Sitka School Board clerk Tim Fulton, responding for the board, said he thought it was important that every student experience Challenge Day at least once in his or her high school career. He didn’t know where the funding would come for the event next year, but “maybe that’s where we can work together on fundraising.”

The board also responded favorably to Coaching Boys Into Men. Superintendent Mary Wegner said that there were grants and other supports in place that could help make it a reality.