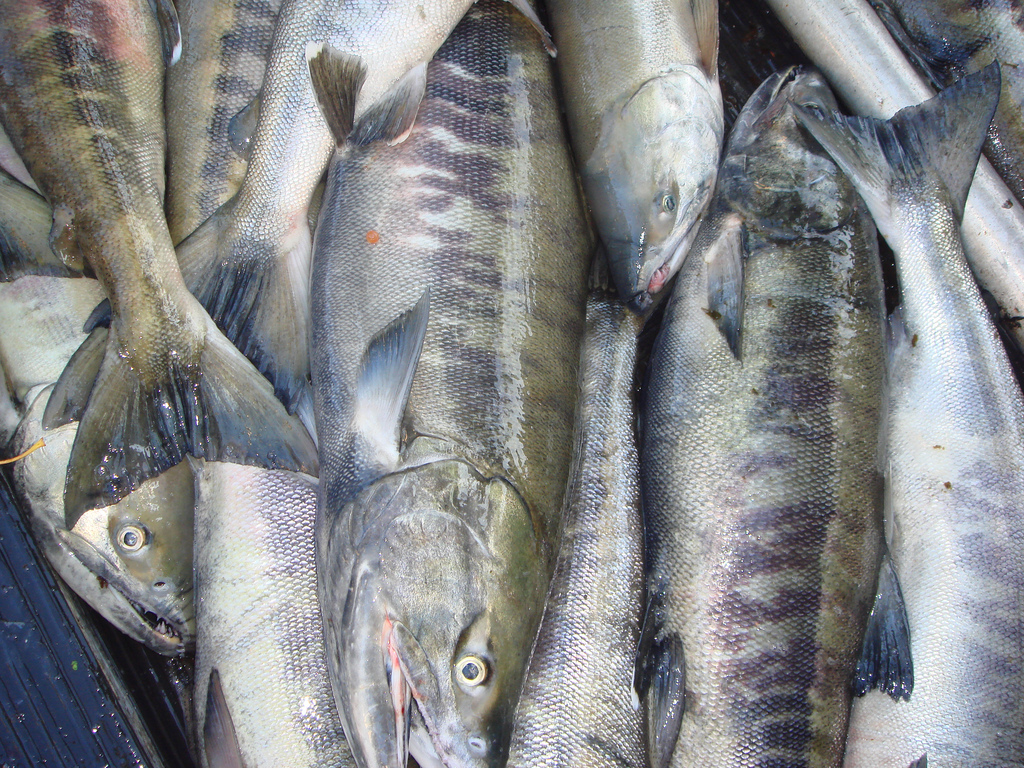 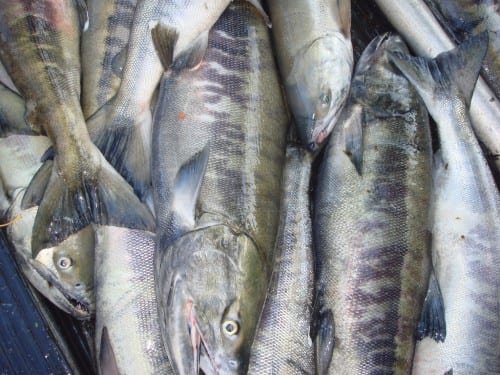 Chum salmon, which develop distinctive striping as they reach spawning maturity, have increased steadily in value over the last decade. (Flickr photo/Watershed Watch)

Southeast trollers want to see an increase in their share of hatchery-produced chum salmon.

In testimony before the Alaska Board of Fisheries on Wednesday (2-25-15), trollers asked for management revisions that would give them more time and opportunity to target this increasingly valuable species.

The Alaska Board of Fisheries meets in Sitka’s Harrigan Centennial Hall through next Tuesday. The public is welcome to attend in person, or online.

In the not-too-distant past chum were hardly worth catching — and they wouldn’t often be caught on king or coho gear. Sitka troller Matt Lawrie told the Board of Fish that his fleet has figured out how to land chum.

“While these methods and gear have improved catch rates, trolling is still a hook-and-line fishery, and as such can not compete with net fisheries without extensive access in time and place.”

Since trollers began targeting chum several years ago, they’ve found it difficult to hit their allocation. 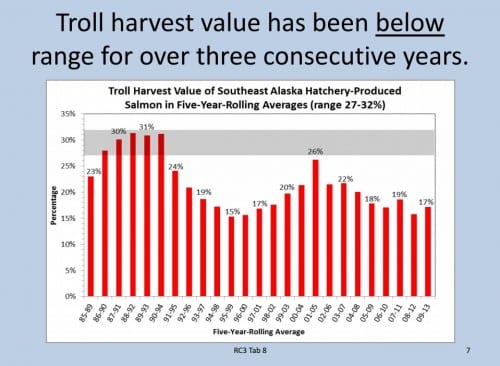 The source of the troll complaint: On average, the fleet has been unable to consistently meet its target allocation of hatchery-produced salmon since the mid-90s. (ADF&G graphic)

In 2003, trollers sold chum for around $.16 per pound. More recently, it’s been as high as $.90 per pound — an increase of over five-fold — though the price remains extremely variable.

Proposal 227 asks the board to reauthorize the Chum Salmon Troll Management Plan for Northern Chatham Strait, and to allow trollers to fish 7-days-a-week — that’s up from 4 consecutive weekdays.

Still, even though hatcheries like Sitka’s Northern Southeast Regional Aquaculture Association and Juneau’s DIPAC are producing millions of chum, the commercial pie can only be divided into three pieces — troll, gillnet, and seine.

Linda Danner, who chairs the Chum Trollers Association, voiced her support for proposal 176, which would reallocate hatchery-produced chum in favor of trollers. But she understood it would come at a price.

“To improve the number of fish caught by the gear group lowest in allocation requires some other gear group to give up fish.”

Danner argued that the hatchery boards and the state’s Regional Planning Teams are dominated by the net fisheries, and that trollers stand little chance of improving their lot without the Board’s support.

“If the two privileged gear groups on these boards are unwilling to participate in fair and reasonable sharing, the gear group lowest in allocation will never be able to out-vote them. That’s the loophole. We call it Two Wolves and a Sheep Voting on What’s for Dinner.”

The Northern Southeast Regional Aquaculture Association — or NSRAA — has added two new chum release sites in Southeast this year: Crawfish Inlet, about 35 miles south of Sitka, and SE Cove on Kuiu near Kake. Crawfish Inlet, especially, may be a good site for trollers, who already are converging in Sitka Sound to fish for Deep Inlet chum.

Nevertheless, mistrust is hard to overcome. Hatchery fishing schedules for the three different gear groups have been a source of tension — especially in the terminal areas, or “honey-holes,” where returning fish are most concentrated.

“Trollers have appealed proactively and repeatedly to the NSRAA board to correct its allocative problem. Due diligence, and seeking our fair share of the honey-hole allocative harvest has been met with indifference, disgust, and hostility.”

A final chum proposal doesn’t really slice the pie at all — it would just allow trollers to keep their forks in it. Proposal 229 was submitted by Sitka troller Matt Donohoe.

“229 is not asking for time in a terminal harvest area. It is not seeking to displace any existing fishery. No gear group conflicts would result.”

Donohoe’s proposal would allow trollers fishing in the Homeshore area to cross into Northern Chatham Strait without picking up their gear. It would save time, Donohoe said, and give trollers more access to chum.

“Yesterday, Mr. Chairman, when you asked Carl Peterson what could be done to help bring trollers up to their allocation, I was in the audience like some sort of kid who, you know, had to go to the bathroom. I know! I know! Pass 229 and pass 227. Thank you.”

The Alaska Board of Fisheries took almost two full days of public testimony at its Sitka meeting, before moving into the so-called “Committee of the Whole,” where they will attempt to consolidate similar proposals, and iron out other details with the stakeholders and the public, before moving into formal deliberations.