At Board of Fish, a preview of pot vs. longline conflict 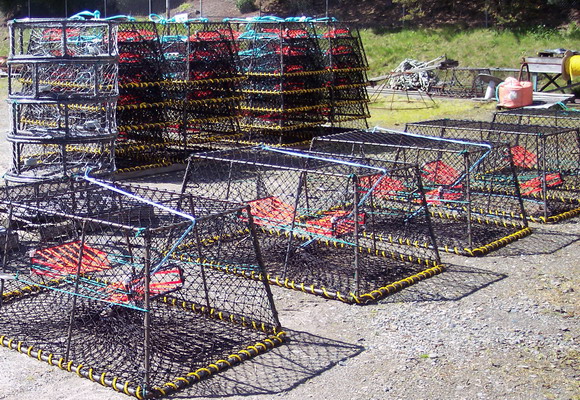 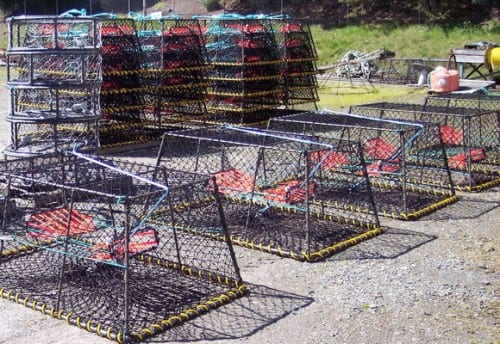 A proposal before the Board of Fish would have allowed finfish pots like these to be used in parts of the Southeast black cod fishery. (Photo courtesy of Neptune Marine Products)

The Alaska Board of Fisheries on Friday (2-27-15) took no action on a set of proposals to allow pots in the Southeast black cod fishery.

The fishery is now open only to longliners, with some exceptions. But the debate was a preview of a larger fight brewing later this spring — over what kind of gear will be allowed across the entire Gulf of Alaska.

The Board considered a handful of proposals to allow pots into parts of the Southeast black cod fishery. Pots catch fish in large cages up to ten feet in diameter, instead of the longliner’s  hook-and-line set-up.

But the proposal was opposed by some longliners. Linda Behnken, of the Alaska Longline Fishermen’s Association, or ALFA, said pots and longlines just don’t mix.

Those kind of gear conflicts are a big concern for ALFA. But Behnken said the proposal also pits small boats against larger ones.

“Only larger boats would be able to switch to pots, because the pots are big, are heavy, require a lot more room on deck than longline gear,” she said. “So we saw it as potential for preempting grounds, creating conflicts, and also, potentially, really driving the small boat fleet out of this fishery.”

The proposals were dropped after the Department of Law told the Board the issue was outside its jurisdiction, and the question is actually one for the Commercial Fisheries Entry Commission.

But for Behnken and ALFA, the issue isn’t really pots in Chatham or Clarence Straits, which would affect relatively few permit holders. The big issue is the full Gulf of Alaska.

A similar proposal will come before the North Pacific Fishery Management Council at its April meeting. That would allow pots to fish for black cod, or sablefish, throughout the Gulf. Behnken worried that a decision by the Board of Fish could set a precedent for that larger debate.

And she worries that if pots come in, it will push longliners out.

“If pot boats come in, and they set in an area, longlines have to stay away from that area,” she said. “The shelf slope in the eastern gulf is pretty narrow, it’s really steep. There’s actually not a lot of room on the black cod grounds. If you get a lot of pots strung out there, longliners are gonna fish near them at the risk of losing their gear, and because a lot of our boats can’t switch to pots, they can be sort of effectively precluded…”

The major motivation for adding pots is to reduce the number of fish lost to whales. Longliners in the Western Gulf have to contend with killer whales taking fish off their lines; in the Eastern Gulf, including Southeast, sperm whales do the same. Fish in pots could be protected from that kind of predation.

But ALFA has been working with local biologists on whale deterrents. And Behnken said, at least in the Eastern Gulf,  she’ll take whales over pots any day.

“Here we have some issues with sperm whales, but we’ve been working for years to develop deterrents, develop avoidance systems, and feel like we have a bit of a handle on that,” she said. “The whales are much less of a threat to the fleet, and to the communities that depend on that fleet, than allowing pots. ”

The Board did approve a proposal backed by ALFA and Sitka longliner Dick Curran to limit households to 50 black cod per year in the personal use fishery. The fishery previously had no limit.

The Board of Fish is meeting in Sitka’s Harrigan Centennial Hall through Tuesday, March 3. The meetings are open to the public, and available online. You can the livestream here.