When you give a middle schooler a microphone… 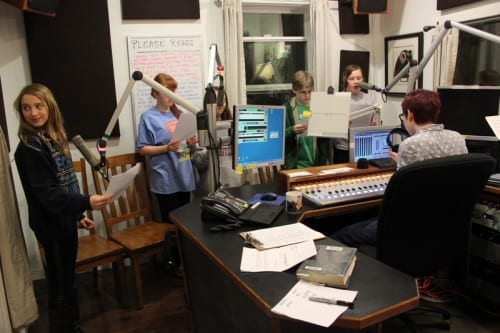 Six students from Blatchley Middle School were guests on the Mt. Edgecumbe Radio Club this week to debut their variety show. “It was great having them. They fit in really well with the show,” said MEHS senior, Korbin Storms. (Rachel Waldholz/KCAW photo)

For four days this February (Feb. 16 – Feb. 19, 2015), six students from Blatchley Middle School ventured off campus to learn the craft of radio at the KCAW studios. The radio class was one of 78 classes offered during the school’s “Discover Your Potential” week. Demonstrating an impressive natural ability and commitment to learning more, the students managed to produce a 20-minute radio show of their very own.

Yesterday (3-3-15), The Blatchley Variety Show aired in tandem with the Mt. Edgecumbe Radio Club. This 20-minute radio program featured a medley of songs, skits, and student produced news. The students hosted the program and chose all the music.

Korbin Storms, a senior at Mt. Edgecumbe High School and host of the radio club, interviewed the students about their experience. Storms shared her own tales of early radio woe and inquired about the students’ future plans for high school.

Korbin: What was the hardest part of the radio class?
Kendall: Trying to be calm. (Laughs)
Allen: The hardest part probably for me was speaking on live radio because, you know, it’s kind of nerve wracking.
Korbin: You’re kind of a pro at it now. You’re a lot better than I was when I first started and that was freshman year. When I started, I talked super super fast and you couldn’t even understand what I was saying. Like that. (Laughs)
Allen: Thank you.
Abigail: High praise indeed. Hardest thing for me was probably the standard “Nobody likes the sound of their voice on radio” lecture. You get it a million times, but it never stops hurting. (Korbin laughs)
Melissa: The hardest part for me was not touching all buttons. I mean, c’mon! They’re buttons and they’re flashing and you want to touch them.
Rose: And the hardest part for me was learning to get up in the front of the microphone and speak in front of it.
Korbin: That’s awesome.

Over the course of the week, the student learned the basics of digital recording, microphone handling, “man on the street” interviews, and vocal delivery. They produced two news stories, one about Elizabeth Peratrovich Day and another about DYP week, that aired during KCAW’s local news break. 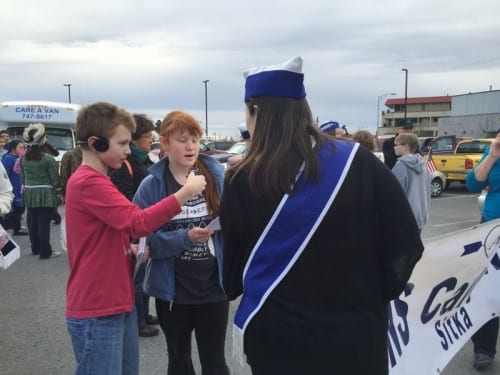 Blatchley students Lucas Ethridge and Abigail Fitzgibbon dove immediately into reporting on the first day of class, with “vox pop” of marchers at the Elizabeth Peratrovich parade. (Emily Kwong/KCAW photo)

After ruling the airwaves for a full 20 minutes, the Blatchley students retreated to the Larkspur for cookies. But not before playing a blooper reel…”I like bacon!!!” 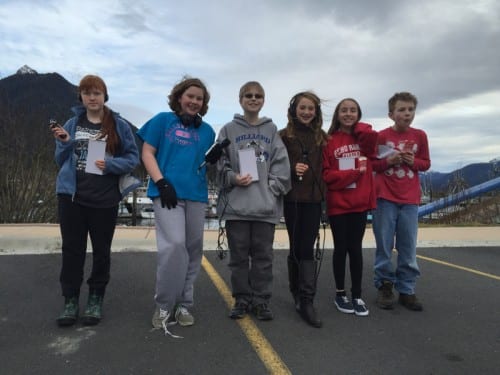