Hospital on the mend, as permanent CEO Rob Allen takes the wheel 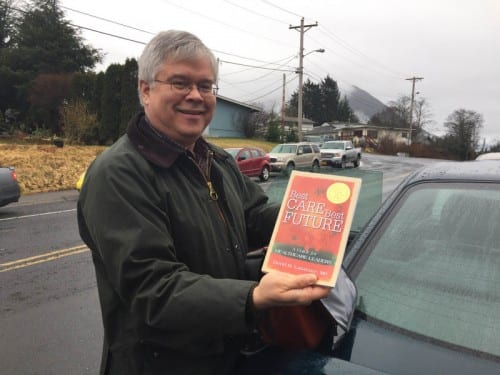 “I’m constantly getting articles and books from senior staff,” said Rob Allen, who has recently accepted the board’s invitation to stay on as the CEO of the financially ailing Sitka Community Hospital. Allen was considered for the position last year and was brought in after the former hire abruptly quit. (Emily Kwong/KCAW)

After six weeks on the job, Rob Allen – the interim CEO of Sitka Community Hospital – agreed to take on the position permanently. He announced his decision during the hospital board’s last meeting in February (2-26-15) and expects to negotiate for a contract soon.

Hospital management is a new chapter for Allen, who grew up as boat captain in one of Southeast’s most prominent maritime families. He said the hospital’s financial panic has subsided, thanks in large part to the staff members who rode the wave.

While Rob Allen feels good about his decision, he is the first to say he has some serious reading to do. When he met with KCAW last Wednesday (3-4-15), he was preparing to fly out to Maine to see his daughter. “I’ve got a book about this thick I’m going to be reading on the plane about the medical health care world and operating it as a business,” he said.

Allen was born in Kodiak, but he’s really a son of Sitka. He was raised here and was president of Allen Marine Tours for nearly two decades. When he and his wife moved to Massachusetts in 2008, Allen knew he’d orchestrate a way to come back. His intention was the operate a newly bought charter vessel for the summer, called the Midsummer Dream. Allen said, “My plan was to be one the boat all summer. Instead I’m in my windowless office. (Laughs). That’s the hard part.” 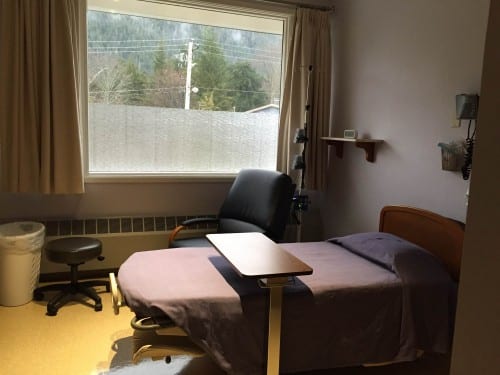 The hospital has found ways to cut cost internally, by cutting overtime pay and enforcing a low census policy, whereby nurses leave work early if there aren’t a lot of patients that day. “You can really see the difference in our bottom line,” said Allen. (Emily Kwong/KCAW)

We’re seated in that windowless, basement office – there’s an open door policy – and though he’s missing a CEO name tag, Allen said he’s become more comfortable with the role since he took office (1-19-15). He has a better grasp of the financial picture, a good rapport with staff, and has made inroads with the Alaska Hospital Association. Last week, Allen went to one of their meetings in Juneau.

Allen: It was a good chance to meet other hospital CEOs and start talking to them. They’re a great resource.
KCAW: Did they know about what happened? Did they ask you?
Allen: Everrrrybody knows what happened. Yes. (Laughs)
KCAW: What did they say?
Allen: Oh they just… most of them were happy to see there was somebody that would step in and take it on.

Allen applied for the CEO job last year, but lost out to Jeff Comer, who had extensive experience in hospital management elsewhere in the country. Some of that experience was of short duration, however, and that would prove to be the case in Sitka. Barely three months into the job, with the hospital in financial disarray, Comer abruptly resigned and around the same time, filed a police report alleging that he was assaulted by an unidentified couple while hiking on a trail.

Chief Nurse Raine Clarke, who served as interim CEO before Allen was brought in, said the circumstances created not just confusion among the staff, but some outright panic.

Clarke reflected on that time, saying, “A little, I mean I can’t even say a little…People were afraid. They were afraid the hospital was going to go under. People were afraid for their jobs. We were trying to make it so that staff could come in and still just feel like they were doing their job and that’s all they had to do. That they didn’t have to deal with everything else that was going on out there.”

“It was tough there for a while, for about a month,” said Patrick Williams, the Program Coordinator. In the wake of the crisis, he said that members of the administrative team would stay until 8 o’clock, sometimes 9 o’clock, at night to come up with ways to put the hospital back together.

Williams motioned to his name tag, where a red button was affixed to the front. He explained that former obstetrics coordinator Ruth Watson took it upon herself to walk around the hospital one day and hand out bright red buttons that said things like “SCH Team. Williams added, “There’s also a little button…I actually don’t have that one on right now…that says SCH will survive.” 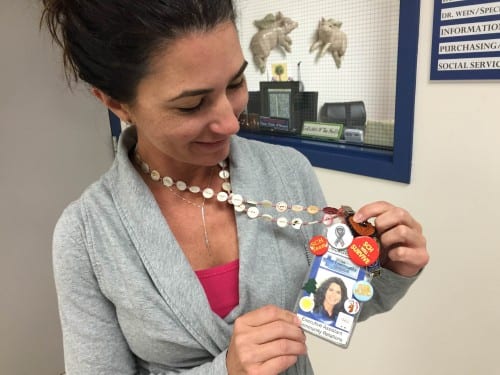 To boost morale, Ruth Watson, the former OB coordinator, passed out buttons to staff members like Angela McGraw with messages like “SCH Will Survive” and “SCH Team.” Amid discovery of financial losses and the transition to a new CEO, the hospital staff is determined to move forward. (Emily Kwong/KCAW photo)

I’m walking down the hallways with Public Relations Coordinator Angela McGraw. She said, “I think we’re coming out on the other side of it okay.” Everywhere we go, from the radiology room to IT, people said the same thing: ‘We’re surviving. We’re doing okay.’

Daniel Kilkeary began work the same month the hospital announced its financial troubles. He said that, despite the crisis, he wasn’t all that worried. “My wife works over in medical records – she does the billing and coding over there – and she always felt like the hospital was sound and it’s just a matter of catching up,” Kilkeary said.

Catching up by cashing in. Allen says that the debt collector they hired brought in $560,000 in January. To cut cost internally, the hospital began enforcing it’s low census policy by sending staff home when the patient count was low.

Census numbers have been low, but throughout the winter, fluctuated as usual. According to Clarke, the hospital provided 83 days of acute care in February, admitted 24 patients through long term care and 159 patients through the Emergency Room. In January, those numbers were 155 days, 25 admissions, and 130 ER patients. In December, they were 129 days, 25 admissions, and 131 ER patients.

So far, there’s been no need to ask for additional loans from the city.

And as the hospital approaches a new budget cycle, Allen plans to open up the strategic planning process to the public through focus groups and two town hall meetings this spring.

Of the decision to make the planning public, Allen said, “It’s kind of credibility issue for me. We want to be able to show the community that we have gone through a good planning process that has credibility.”

When asked if the hospital would ever merge with SEARHC, Allen said he’d at the very least like to explore streamlining services. He talked about the duplicate services offered at both hospitals, saying, “Two emergency rooms. Two OBs. There might be ways we could cooperate or share resources, so there is not so much overlap.”

Allen also wants to get to the bottom of what went wrong in the first place. For that, he hired interim CFO Cynthia Brandt of the Anchorage-based firm WaineBrandt through April. Though it was a perfect storm of problems, blame is shifting largely to the electronic medical system that the hospital implemented last May, called Centric.

“All the systems ground to a halt,” said Allen, “So there was a real slowdown in getting bills out. The decision to pick the system was made a couple of years ago, so I haven’t even found any documents about how evaluation was done or why this one was chosen.”

In such cash-strapped times, it doesn’t seem likely the hospital will expand into a regional healthcare hub, as envisioned by Jeff Comer. Right now, it’s enough to just treat patients who come in and collect the money they’re owed. Allen offered the following analogy from his boat tour days to staff, which Clarke said she appreciated.

“Allen was talking about Allen Marine and said, ‘It’s really nice to take a tour out and have customers pay when it’s beautiful out there and there is a lot of wildlife. But the days you have to take people out on the boat and it’s windy and raining and there is no wildlife, the bottom line is you still have paying customers.’ And so I think that having that mindset can kind of come over to healthcare. Nobody wants to be in a hospital. Nobody wants to have to come and be sick. We just need to focus on our patients.”

A task that’s become a lot easier, Clarke said, with a steady hand at the wheel.