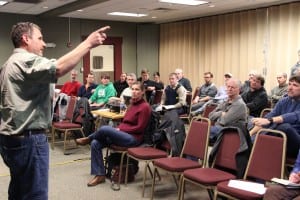 Permit-holders listen to ADF&G biologist Dave Gordon lay out how the 2015 herring fishery will work. This year’s fishery is being conducted as a co-op, so far fewer fishermen are in town. (Rachel Waldholz/KCAW)

The Sitka Sound sac roe herring fishery is a quieter affair this year, as the fleet conducts its first fully cooperative fishery since the mid-90s.

The seiners of the sac roe herring fleet are famously competitive. But fishermen are anticipating perhaps historically low prices for Sitka herring this year. As a result, the 48 permit-holders agreed to fish as a cooperative well ahead of the fishery’s start, in an effort to lower costs.

That means fewer boats. Biologist Dave Gordon, who manages the fishery for the Alaska Department of Fish & Game, says he expects about 25 boats to participate this year.

It also means less of everything else.

“There will be a lot less tenders in the harbor than you’d normally see,” Gordon said. “And also fewer spotter pilots, that sort of thing. So that will be noticeable. Fewer people around, a little less excitement associated with this fishery.”

Gordon says as far as he knows, it’s the first time the fishery has gone co-op because of the price. He estimates that boats took in around $180 per ton last year. That was down from recent years, when the fleet averaged more than $500 per ton. And fishermen worry that this year, the price might go even lower.

The co-op will also change the pace of the fishery. Instead of seiners competing to catch as many fish as they can, as fast as they can, each boat will be targeting a set amount of fish.

Gordon says that may mean the Department doesn’t have to limit openings to just a few hours.

“If everything’s going well and they’re harvesting good-quality herring, there’s no reason to shut it down,” Gordon said. “We can basically fish all day long, and give them the flexibility to target their efforts on good fish, and take their time, and not worry about competing for schools and that sort of thing.”

The Department will be sticking with its preliminary harvest level of 8,712 tons. Normally, Fish & Game updates that number based on the results of winter samples, but those numbers weren’t available in time.

That quota is the lowest since 2003, but Gordon says it’s about average if you look back over the past 30 years.

“This is more normal” than the large quotas of the 2000s, he said. “If you were here in the 80s and 90s, these were the sort of guideline harvest levels that we saw back in that time.”