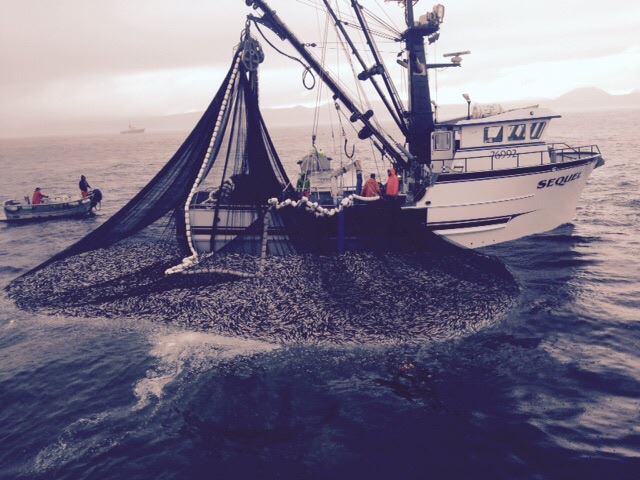 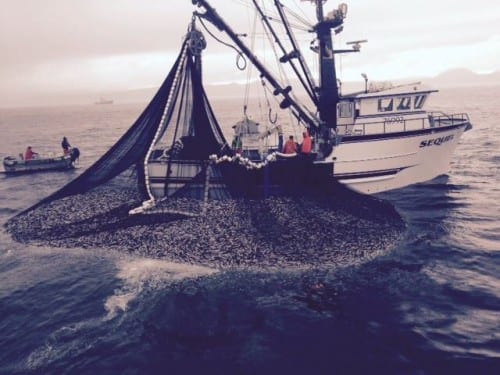 The Sequel makes a set during the fifth opening of the 2015 sac roe herring fishery, on March 22. (Photo courtesy of Big Dog Fish Company)

The 2015 Sitka Sound sac roe herring fishery is over.

The fleet reached its quota of about 8700 tons of herring on Wednesday evening (3-25-15), after a full week of slow and steady cooperative fishing.

Alaska Department of Fish & Game biologist Dave Gordon estimated that seiners had about 150 tons left to mop up on Wednesday. About four boats went out, and by 5 p.m. those final tons were being pumped onto tenders.

The fleet fished exclusively in the northwest portion of Sitka Sound, starting last Wednesday (3-18-15). Because of the low price this year, the 48 permit-holders had agreed to forego a competitive fishery and split up this year’s quota, with each boat targeting a set amount. The result was a quieter, slower season than Sitka is used to.

Fish & Game also reported its first sighting of herring spawn during an aerial survey today, with about 200 yards spotted in the Hayward Strait area.

With the commercial fishery over and spawning begun, the focus in Sitka will now switch to the subsistence roe-on-kelp and roe-on-hemlock harvests.