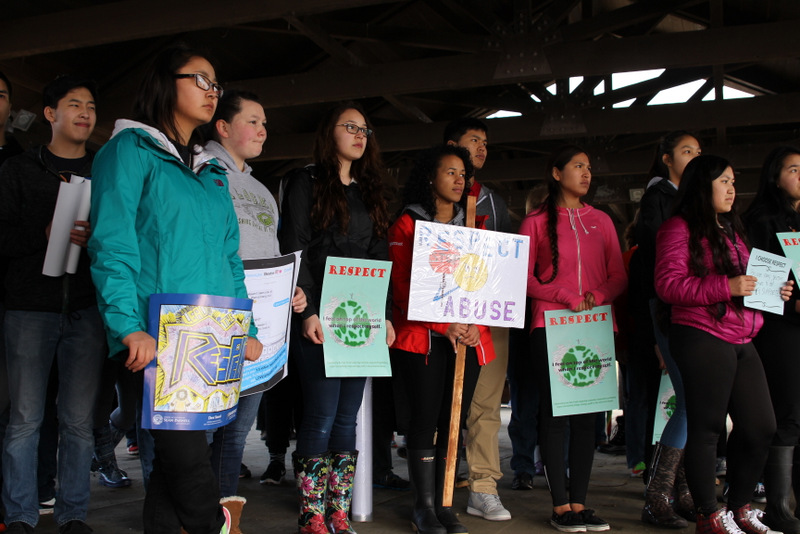 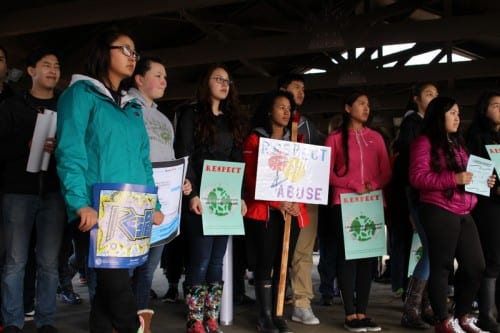 A Senate subcommittee proposed a budget that would zero out state money for domestic violence and sexual assault prevention programs. The budget was released the same day as the Choose Respect March. (Emily Kwong/KCAW)

The Alaska House of Representatives passed a $4.1-billion operating budget earlier this month, which cut agency spending by about 10%. Those cuts come as collapsing oil prices have opened a $4-billion gap in state finances.

Now, the state Senate is weighing in — and the cuts may get deeper.

Last week (Thursday, 3-26-15), a Senate subcommittee proposed zeroing out all funding for domestic violence and sexual assault prevention programs across the state.

Among the organizations that would be affected is Sitkans Against Family Violence (SAFV) Sitka’s women’s shelter, which also leads prevention programs for teens and kids.

Executive Director Vicki D’Amico said SAFV had been warned by representatives that the cuts would be serious. But she didn’t expect the funding to disappear entirely.

D’Amico said, “We had a feeling (about the cuts being large), but I guess I was in some kind of denial. I wonder if it’s because people don’t really understand what prevention is.”

In recent years, SAFV has received about $200,000 annually in prevention funding, through the State Council on Domestic Violence and Sexual Assault.

The House left that funding intact, budgeting $1.5-million for the Council.

But under the Senate proposal, that budget line was deleted. In Sitka, that includes funding for prevention programs like Girls on the Run, Boys Run, and The 4th R – a health curriculum for 7th through 9th graders.

Julia Smith, SAFV’s Prevention Director, said, “There’s no guarantee that the programs will continue, but we will work as hard as we possibly can to find funds to support it.”

Smith noted that the shelter and services for victims of domestic violence would not be affected, but she stressed that programs for kids and teens can stop violence from happening in the first place.

“Prevention is all about teaching healthy behaviors,” said Smith. “For girls who are in ‘Girls on the Run’ in 3rd through 5th grade…if this is the only time that they’re learning how to interact with their peers in a positive way or how to process their own emotions in a healthy manner and they never get those skills taught to them ever again in life, it’s unlikely that this information will stick. Prevention is an investment. If we’re investing early on, we’re going to have a larger return.”

The proposal now goes before the full Senate Finance committee. That committee is expected to release its recommendations within the next week.