On first reading: Board vote keeps pool, but drops 3 teachers 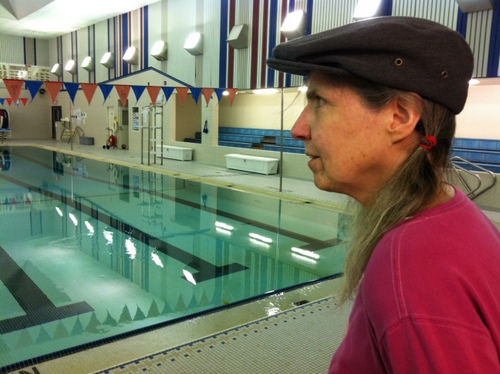 A deeply-divided school board passed a preliminary budget for next year that keeps both the Blatchley swimming pool and the Community Schools program functioning. But there is a problem: At least $1-million in revenue to balance the budget hasn’t been identified yet. 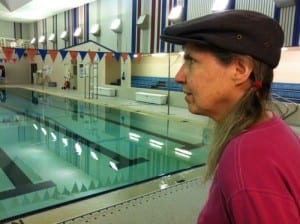 Former pool manager Jane Eidler looks out over the Blatchley Pool in 2013, the last time aquatics was on the district’s chopping block (KCAW photo by Ed Ronco)

For a school board that has been mostly aligned on all major policy questions over the last few years, this was a parting of ways: Whether to pass an extremely cautious budget that keeps as much money in the bank as possible for more rough times ahead, or to pass a budget that dips into reserves and assumes that Sitka’s assembly — and taxpayers — will come through with additional funding.

The board voted for the latter, over the opposition of its president, Lon Garrison, and member Jennifer Robinson.

Garrison said this year was unlike other budget years.

“In the past there has always been a glimmer of hope — whether it was the state or federal government to provide funds — and we would come out the other end. And I can tell you that the glimmer of hope is so minute at this point, and the timing by which that hope exists, doesn’t meet up with what we have to endure right now.”

The problem right now is a projected budget deficit that jumped overnight to over $3-million when the Alaska Senate Finance Committee voted last week to reduce the amount the state contributes to the education of each student — the so-called “Base Student Allocation” — by $200.

The BSA used to be considered untouchable — and legislators may yet restore it — but Garrison said the mood in Juneau among the Republican majorities is to cut far beyond where legislators have cut before. And the discussion of new taxes — or tapping into the permanent fund — to offset low oil prices is almost non-existent.

For her part, Jennifer Robinson thought it was unwise to take the school district’ reserves down below $1-million. Although Sitka has gotten away with it in the past, Robinson didn’t want to take the chance for the sake of the swimming pool.

“Do we let go of a couple of very valuable teachers to keep a very valuable swimming pool? I don’t know. That’s what we’ll have to decide. But continuing to take our reserves all the way down to nothing and then crossing our fingers and hoping something going to come through — these numbers (from Secure Rural Schools) are not even guaranteed.”

Around 75 residents — many of them students — packed the High School Library, mainly to protest the proposed elimination of Community Schools, a program that allows recreational use of school buildings after hours, and the Blatchley pool. Others suggested that the board look into other possible savings in technology or standardized testing.

Fourteen people spoke. The common theme was the impact of the loss of the pool, club swimming, competitive swimming, and after-school programs on kids. One mother of a 2-year-old and a 4-year-old said her son “would be crushed,” and warned of losing ground in the battle against drugs, if kids lost access to these programs. Board member Cass Pook echoed these sentiments when she said that closing Community Schools and the Blatchley pool was “putting too much at risk.”

The testimony was largely uncritical of the board. Lindsay Evans even thanked the board, and suggested that solving the problem was the community’s responsibility.

Harvey Brandt expressed frustration with the state’s dependence on oil. He also thought residents should take responsibility for local institutions, and advocate for more revenue.

“We the people of Alaska need to step up. And if there isn’t enough oil money, maybe it’s time that Alaska remove the dubious honor of being the lowest-taxed state in the United States — that’s a fact we’ve known for years.”

And Sitkans may be among the first to go there. In addition to drawing down district reserves to $600,000 — an idea proposed by member Tom Conley, and backed by Cass Pook and Tim Fulton — the school board is looking to the city for another $1-million in funding next year to make ends meet.

In a memo to the assembly accompanying the latest draft of the municipal budget, administrator Mark Gorman says the city might capture the $1-million through the modification or “elimination of sales tax exemptions, and some service cuts.”

Recently, Sitkans have balked at the idea of additional taxes to boost funding for the community’s roads program, but historically they’ve been generous to schools — passing major bond packages for new roofs and a Performing Arts Center.

That’s where member Tim Fulton is placing his faith.

“You, the community, is my glimmer of hope. This year is dire, and next year is going to be even worse. We have to come together as a community.”

If the assembly agrees to give another $1-million to the schools, it would bring their total contribution to $6.3-million, still $900,000 less than the cap allowed by law.

In the end, the board approved a preliminary budget for next year of just over $20-million, with reserves of $600,000, three fewer full-time teachers — all retirees who will not be replaced — and $900,000 in various other cuts and savings. Blatchley pool and Community Schools both remain in the budget, at a combined cost of $375,000.

The school board will hold a work session with the assembly at 6 PM Thursday, April 9 in Harrigan Centennial Hall to discuss the $1-million in supplemental funding. The board will then hold a second hearing and vote on a final budget at 7 PM Wednesday April 15, in the Keet Gooshi Heen multipurpose room.