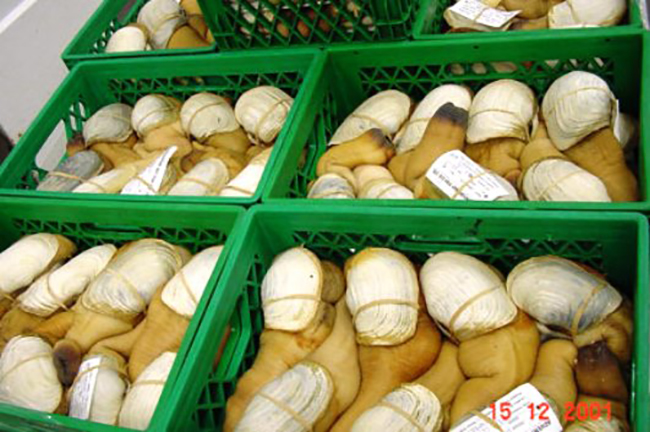 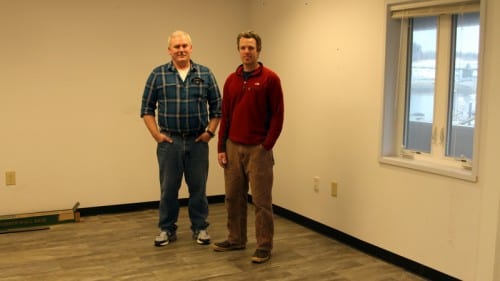 Despite the risk of paralytic shellfish poisoning — or PSP — Southeast Alaska has a robust dive fishery that includes geoduck clams. The entire industry hinges on weekly testing results from the Department of Environmental Conservation laboratory in Anchorage.

This scenario could change in the not-too-distant future. In part 1 of our 2-part series, KCAW’s Emily Kwong reported on efforts by Sitka Tribe of Alaska to monitor the waters of Southeast for PSP. In part 2 today, she tracks their plans to launch a commercial testing lab.

If you’ve ever seen Willy Wonka and the Chocolate Factory, you may remember that scene with the golden eggs.

Willy Wonka: These are the geese that lay the golden eggs.

Veruca Salt: Are they chocolate eggs?

The green haired Oompa Loompas weigh the eggs on a scale to decide if they’re good or bad.

Wonka: If it’s a good egg, it’s shined up and shipped out over the world. But if it’s a bad egg, down the chute. 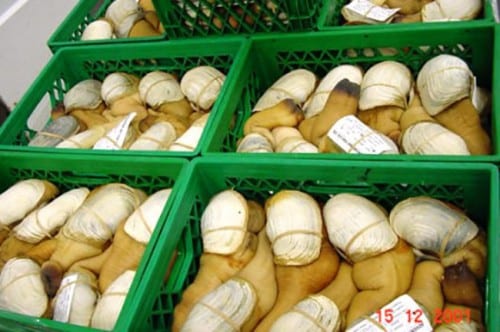 China imposed a five month ban on geoducks from Alaska in December of 2013 out of concerns for PSP toxins. (Photo courtesy of KRBD and the Alaska Department of Fish & Game)

The same could be said for geoducks. These giant bivalves, with lolling necks like space worms, have a high market value, where they’re called xiàngbábàng (象拔蚌) or elephant trunk clams in China. Because these clams run the risk of carrying PSP toxins, divers cannot harvest an area before a few of it’s clams have been sent to the DEC and cleared for consumption.

“If you’re lucky you get the sample on a plane that day and it gets up to the lab in Anchorage,” said Larry Trani, a diver and member of the Southeast Alaska Regional Dive Fisheries Association, or SARDFA. Harvest has to happen within a week, which means that by the time divers get a test result, they tend to do all their actual harvest in just one day. And that’s not a lot of time.

“Time is off the essence on this,” said Trani, “As far as making all the connections from Southeast Alaska to Hong Kong, or wherever they’re going.”

Divers like Trani go down to the bottom of the ocean floor, breathing surface supplied air through a diving hookah, and walk the bottom, blasting the sand with a water gun and prying gooey ducks from their beds. It’s dangerous work, which Trani believes could benefit from the kind of lab Sitka Tribe wants to open.

“I can see that that would save time on the sampling and give us more days in which to conduct our diving,” said Trani. “I think it’s an excellent idea.”

That’s the appeal of a lab in Southeast, one Sitka Tribe hopes will persuade divers like Trani, shellfish growers, and harvesters to relocate some of their testing work to Sitka.

The man with the plan is shellfish biologist Chris Whitehead, who pitched the idea for a biotoxin lab to Sitka Tribe two years ago.

“I got really busy at writing grants and somehow they all got funded, said Whitehead. “Now it’s a matter of doing the work.”

That includes over half a million dollars from the Administration for Native Americans’ (ANA) Environmental Regulatory Enhancement Program to build the lab from scratch.

Jessica Gill is the tribe’s fish biologist and said, “When we get our first order, it’s going to be like Christmas!”

The most eagerly anticipated order is for the receptor binding assay, or RBA machine. The machine isn’t authorized to test gooey ducks for PSP yet, just mussels and soft shell clams, but Chris Whitehead believes that will change soon. And the exciting thing about the machine is that it eliminates the traditional testing method, practiced by labs throughout the country.

Whitehead explained, “They run whats called a mouse bioassay. So they inject this slurry of shellfish into a mouse…”

And time how long it takes for the mouse to die. Based on that number, the lab can calculate the relative toxicity of the gooey duck for humans. With the RBA method, no mice need be harmed.

Jessica Gill, for her part, is relieved. She said, “I don’t think I could take the lab manager job thinking, ‘Oh, we’re going to kill a bunch of rats today.'”

With staff to be trained and testing to launch, STA has secured 1.3 million dollars in grant money for the PSP project for the next three years. That includes $210,000 from the Environmental Protection Agency’s Indian General Assistance Program (IGAP) for fiscal year 2015, with plans to continue through 2017, $48,000 from the Bureau of Indian Affairs (BIA), $527,000 from ANA to the build the new lab, and an additional $150,000 to support SEATT to conduct cellular toxin analysis, as detailed in Part 1 of our series. 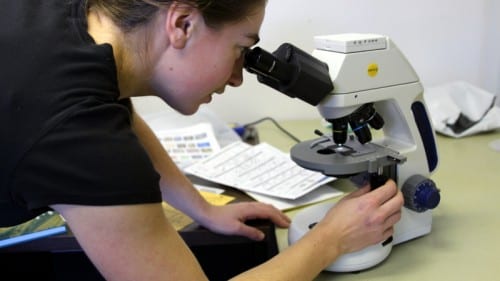 AmeriCorps volunteer Esther Kennedy is helping STA launch an early warning system for beaches in Southeast, so harvesters can know when it’s safe to dig and when to steer clear. (Emily Kwong/KCAW photo)

“We couldn’t keep this lab open on grants forever,” Feldpausch said. “It was going to have to be something that could stand on it’s own.”

And that means attracting commercial business. The goal is for the lab to become a source of unrestricted funds for the tribe.

But among SARDFA and other potential customers KCAW spoke with, the big question on their minds was this: Would the state of Alaska by okay with handing PSP testing over to a commercial entity?

Elaine Busse Floyd, the Environmental Health Director of the DEC, said, “Well I think that if they achieved FDA certification, that would be a terrific benefit to the Southeast Alaska community.”

Busse Floyd said that while it would nice to have a lab servicing Southeast, it’s never been done before and for good reason. The state does PSP testing for free.

“So it’s possible that the big influx of customers that you might think you were going to get because of being closer, you might not get because you’d be charging and we wouldn’t be,” Bussy Floyd said.

But the state may not always be there. Funding for PSP testing is safe this fiscal year, but that may change with future budget cuts.

The lab in Sitka would also have to earn certification from an alphabet soup of agencies, such as the FDA and the International Shellfish Sanitation Commission. Easier said than done, but STA’s Chris Whitehead has determination in spades.

“For a long time, there’s probably been a need to do something like this,” said Whitehead.
“I don’t know if I lucked out and just came in the right time to start it, but doors are opening for us to do this.”

Whithead hopes to win FDA certification by 2017 and to first test shellfish collected through subsistence, through the Southeast Alaska Tribal Toxins Group, or SEATT. It’s an ambitious plan trying to address a basic problem.

“It all started out I just wanted to go dig clams and I had no one to call to see if it was safe or not.’

And Whitehead hopes this little-lab-that-could can answer that call.