Sitka artist hopes to bring otter to the runway 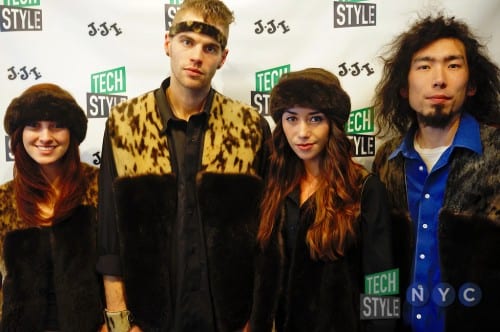 This spring, Sitka artist Peter Williams took a trip to New York City to show his work during fashion week.

A designer and marine mammal hunter, Williams makes everything from hats to earrings from sea otter and sealskin. He’s been trying to break into the lucrative fashion world for years. And he’s got a larger goal in mind: bringing Alaska Native designs to luxury buyers worldwide.

Williams says that one way to save a traditional art form is to create a market for it.

When people walked into the TechStyle Lounge, in an airy loft space in Manhattan during February’s fashion week, one of the first things they saw was a display of seal and sea otter earrings, headbands, and cuffs from Shaman Furs. That’s the business name of Sitka artist Peter Williams.

Anthony Flora was modeling one of Williams’ seal and otter vests.

Flora: I don’t think anyone has walked by without touching something…I’ve been asked if I can be touched twenty times…

Williams was in New York as part of an effort to introduce his work — and marine mammals in general – to the upscale fashion industry.

Which sometimes takes a little explaining — especially in an industry with a famously ambivalent relationship with fur.

But Williams has his pitch down.

He’s tried a couple different spiels. This one seems to get the key points across: it’s legal, it’s special, it’s Alaskan.

Fashion editor John Nubian stopped by TechStyle on a break from the runway shows uptown. He was impressed.

Nubian: …I just came from Lincoln Center today and there were, like, two fur shows. Dennis Basso, which is, like, the biggest American fur designer. And, you know, this is on par with that.. 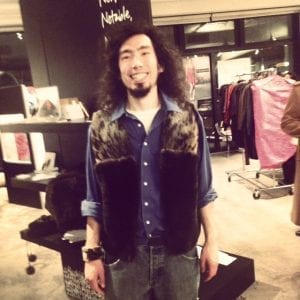 Peter Williams shows off one of his signature seal and otter vests during New York Fashion Week. (Photo by Carol Green)

Williams’ signature piece is a man’s vest. The top third — or yoke, in fashion terms – is harbor seal. Below that is sea otter. The back is wool. He sews it himself.

“Part of why I do what I do, and part of trying to bring seals and sea otters to higher end fashion, is to try to get a living wage for doing arts and crafts,” Williams says.

His prices are a too high for craft fairs or Etsy, he says. He has pieces in a few shops in Sitka. He has a website. But he needs a bigger market – one where customers don’t blink at paying $1500 for a vest.

And that means finding a way to sell outside Alaska.

“We keep cultures and traditions alive by having them be able to be relevant in the present moment,” Williams says.  “The younger generation needs to be able to make a living in order to continue arts and crafts and traditions.”

There are some major hurdles to clear. Like, for starters, being a one-man shop based on an island in Southeast Alaska, far from any fashion capital.

Or being pretty much the only person trying to do this. Williams estimates there are a few dozen people in Southeast working seriously with sea otter. They sell almost exclusively locally.

And then there’s the more fundamental issue of trying to explain what he’s about to a fashion world that has almost no context.

“How do I bottle and explain thousands of years of culture and customs and connection with the land?” Williams asked.

Williams: That’s something that’s very challenging to say to someone who grew up in New Jersey — no offense… [Laughs]

Williams: …and who lives in the city, and may not know that Alaska Natives are still around, or that there is such a thing as Alaska Natives.

Williams knows what he’d like to get across. If he had to sum it up in one word, it would be: connection. His work is all about being connected: to a specific place, to nature, to the animals he is hunting, to culture, to heritage.

So he has a product people can’t keep their hands off. He has a story that seems custom-made for this era of conscious  consumerism. What he needs is a lucky break.

And that’s why he took the gamble, flew across the country, and put down the money for a slot at TechStyle.

His big hope for the trip was to connect with buyers — ideally, buyers for small New York boutiques.

Instead, he says, he got a lot of good feedback and spoke to a lot of reporters. His dream remains frustratingly elusive.

He was, however, being profiled for the British paper, The Guardian, by a writer he met a few years ago in Sitka.

Guardian photographer, Tim Knox, decided to take Williams and the models out onto the High Line, the downtown park, for a snowy photo shoot.

Knox, for one, is on board with fur.

Knox: First trade, isn’t it? One of the oldest trades? That and prostitution… [[laughs]]

Ignore the British humor, but he’s right. And Williams is hoping this old trade can become a modern vocation.

Thanks to Carol Green for recording the New York audio.