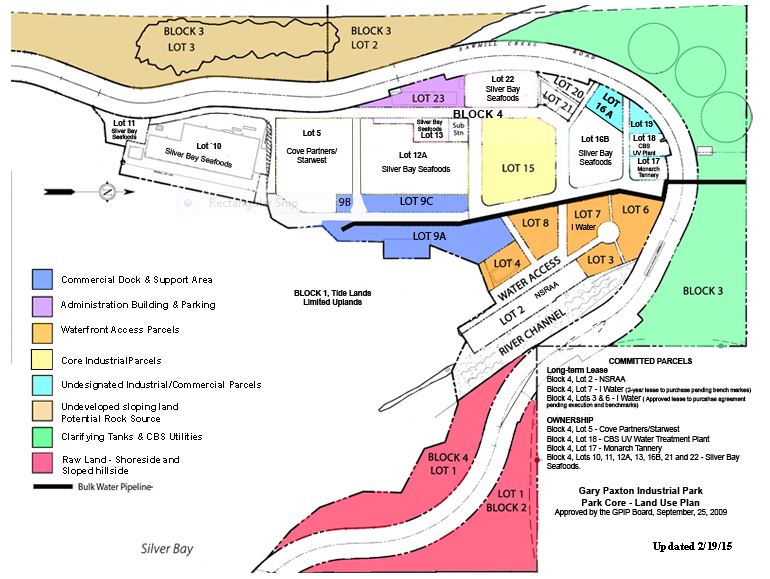 Although much of the uplands in the former mill site remains on the market, park director Garry White told the Sitka Chamber of Commerce this week (5-20-15) that the waterfront continues to attract suitors. 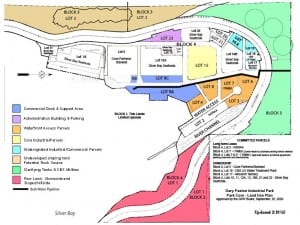 White says there are now 43 full-time jobs at GPIP, and 380 seasonal jobs. When the APC Mill closed in 1993, Sitka lost over 400 full-time jobs. White says his board has been working under a 20-year strategy to develop the site.

White put a map on screen and pointed to several small lots adjacent to the highway, near the city’s recycling center.

“I right now have four different groups wanting to propose on that. My recommendation to the board is that we do an RFP – or Request For Proposals — and put it out and say, Look, we want to divest ourselves of these lots or lease them long-term. Give us your proposals. They all come in at once. We can sit down and vett each proposal on its merits and think about what’s the best fit for Sitka and get these into productive use.”

There also continues to be high demand for the larger properties. Earlier this spring, the city sold just under three acres to Silver Bay Seafoods. The seafood processor has also made an offer for an adjacent two-and-a-half acre lot, where it proposes to build a marine services center.

White said that the competition for this site just got tighter.

“We also have a proposal from our bulk-water group that wants to start shipping water in 20-foot containers — you might have heard that in the news — and the containers would be taken down to California, or wherever else they can pay for water. They also want this chunk of property. And in the last 2 days, I’ve had 2 Chinese groups who’ve been to town who want to put another bottling plant out there. There’s a lot of activity going on. A lot of folks. This property went from being vacant for six years and slowly being developed, to everybody wants it now.”

The chamber audience appeared amused at the prospect of another bottling plant at the park. One of the largest parcels on the site — the True Alaska Bottling plant — has been idle for several years now, a visible reminder of what many consider the city’s haste in selling off prime waterfront land.

Silver Bay Seafoods, on the other hand, is thriving. White alluded to TAB and Silver Bay when he characterized the gamble beneath all economic development.

White was hopeful that the TAB plant would be operating again someday. In the meantime, most subsequent land sales at the park have performance clauses which allow the land to revert to city ownership.

White reported that the park had been in the black for two years in a row, thanks mostly to the Blue Lake Dam project. Seafood remains the anchor tenant, and Silver Bay Seafoods, White said, is the city’s largest property-tax payer.

But he’s got his fingers crossed for water. White said that investors now operating as “Alaska Bulk Water” have secured an 18-acre tidelands lease and Army Corps permit to install a mooring system for ships. They’ve also engineered a floating pipeline to the ships. They’ve purchased over $1.3-million in water credit from Sitka, with a use-it-or-lose it deadline this December.

White’s been told that bulk water will ship from Sitka beginning in July, at a penny per gallon.

He told the chamber, “the park is doing what it’s supposed to do.”