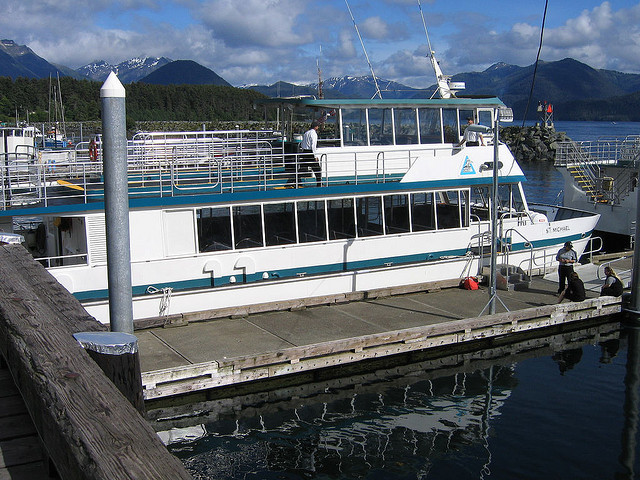 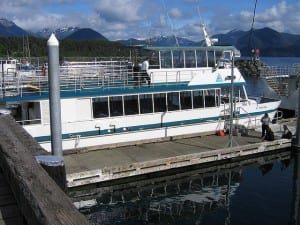 69 passengers and 5 crew members are safe after being evacuated from a tour boat Thursday afternoon (5-21-15) in Sitka.

The St. Tatiana, a catamaran operated by Allen Marine Tours was returning from a wildlife cruise when one of its jet drives apparently failed sometime after 3 PM, causing the boat to begin taking on water.

Allen Marine vice-president John Dunlap monitored communications from shore during the incident. He says everyone aboard heard a loud noise at the time the jet failed. The starboard engine stopped running, and shortly thereafter the boat’s bilge alarms sounded. When the crew inspected the engine compartment, they could see through the clearing smoke that the vessel was taking on water.

Unsure if the boat’s bilge pumps could keep up with the flooding, the captain of the St. Tatiana issued a distress call at 3:30 PM, and ordered everyone into life jackets as precaution. Two good Samaritan vessels and a Coast Guard boat stood by as the St. Tatiana continued toward Sitka. Because of the boat’s limited maneuverability, a second 100-passenger Allen Marine catamaran, the St. Michael, met the stricken vessel outside of the harbor and took her passengers aboard.

The passengers were safely landed by 3:45 PM, and returned by bus to their cruise ship, the Regatta, which was tied up at the Old Sitka Dock.

Dunlap says he’s already received numerous emails from passengers, complimenting the crew of the St. Tatiana — as well as the good Samaritans and Sitka first responders — for their handling of the situation.

The St. Tatiana returned under her own power to the Allen Marine shipyard in Sitka for haulout and repairs. Dunlap estimated that the vessel would be out of service for at least a week.