With fish in the sea, danger of eagles on the runway 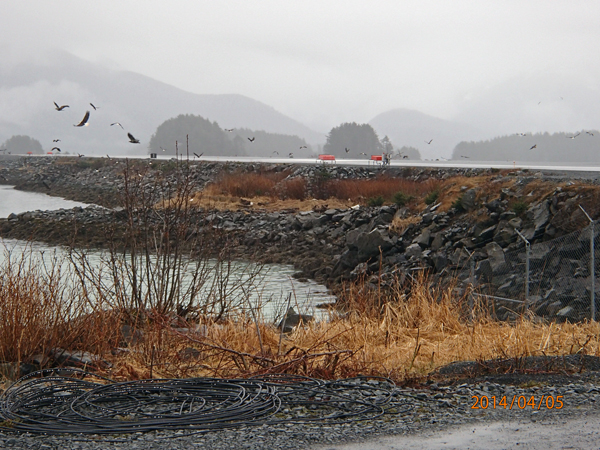 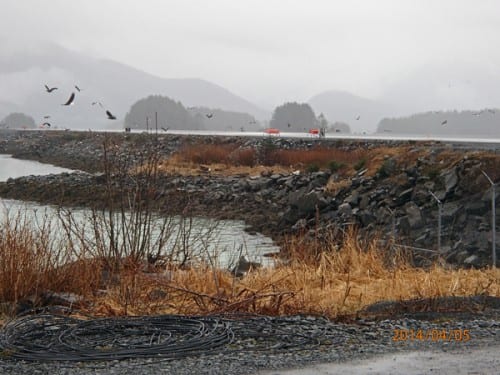 If fish debris gathers near the runway, the feeding eagles pose a safety hazard. “A bird that size, especially an ingestion into an engine, could be catastrophic for human lives,” said Tresham. (Photo courtesy of Dave Tresham)

As fishing season moves into full swing, so does the workload of the staff who haze birds off of Sitka’s runway.

Dave Tresham, a wildlife specialist with the US Department of Agriculture, spends his entire day scaring birds from the Rocky Gutierrez Airport. He says the improper disposal of fish waste in the waters around Sitka’s harbors creates a safety hazard.

The biggest problem — and the biggest scavenger — is the bald eagle.

“A bird that size, especially an ingestion into an engine, could be catastrophic for human lives,” said Tresham. “Sitka is well known for not having an alternate runway to go to. There’s really no way for an aircraft to turn if they had a severe eagle or gull ingestion. ”

It is against Harbor Regulations to dispose of fish in harbor system waters, or to clean fish at any place other a designated fish cleaning station. Tresham says that disposal practices have improved in the past five years, but reminds Sitkans to practice good etiquette on the water to ensure safe travels in the sky.

“The safest zones: if you just imagine the water that can float into the tidal area or anywhere the aircraft might be on the runway, try not to throw anything that’s going to attract the birds in that area,” said Tresham.

“That’s usually within half a mile of the runway area. And so it corresponds locally to right out of the breakwater area (the jetty area) on the north side and the east side, to the middle side of the east channel.”

Recently, the fish cleaning platform at the entrance to Sealing Cove was removed for repairs and will be out of service for several weeks.

In the meantime, fishermen may clean fish at the work float by the O’Connell bridge. Tresham says the Harbormaster has also placed totes along the docks at Thomson Harbor for the public to dispose of fish waste.